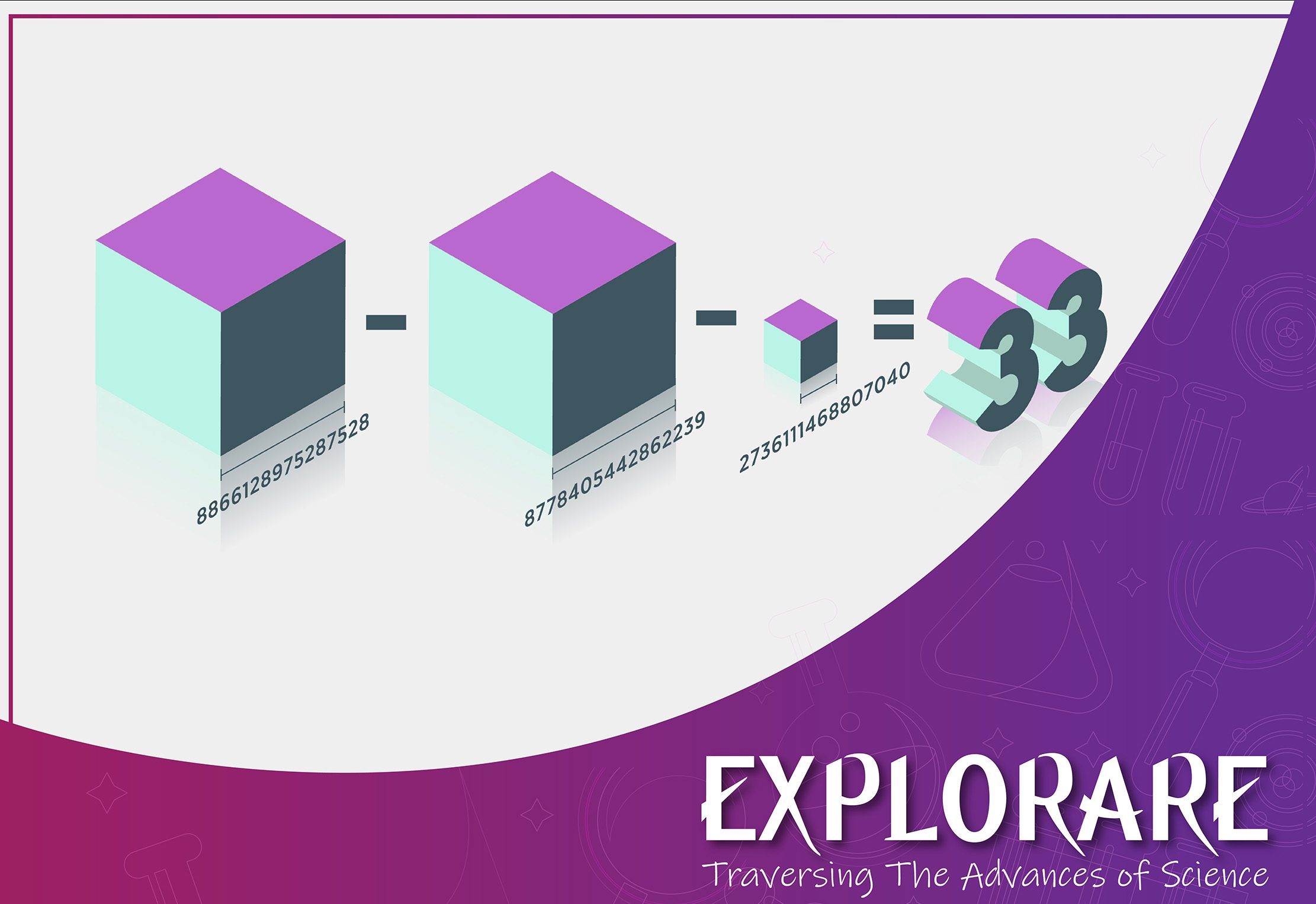 Well…. it took 65 years of trying with ever-improving computers to finally solve it in 2019, and the number of digits in all of x, y, z is a whopping 16! The problem was cracked by Andrew Booker from the University of Bristol using a program running on 512 CPU cores. He then went on to solve the equation for 42 a few months later with Andrew Sutherland from the Massachusetts Institute of Technology (MIT), aided by even more computing power. These discoveries fall under the work done on what is known as “the sum of three cubes” problem.

These belong to the class of equations called “Diophantine equations”. By definition, they are equations involving only sums, products, and powers where all constants are integers, and the only solutions of interest are also integers. For example, 3x + 7y = 1, x² + y² = z² where x, y, z are all integers. Here, x = -2, y = 1 is a solution to the first equation and x = 3, y = 4, z = 5 is a solution to the second.

The focus here are the equations x³ + y³ + z³ = 33 and x³ + y³ + z³ = 42. This representation of 33 and 42 as a sum of three cubes has long evaded mathematicians, even with computational tools available since the 1950s. Apart from these two numbers, the rest of the integers from 1 to 100 could either be calculated as a sum of three cubes or could be proven to not have such a representation.

Finding solutions for 33 and 42

Hence the only possible way to know if numbers such as 33 and 42 can be written as a sum of three cubes and to know the solutions is to solve it by testing the vast number of possible solutions, with some clever bit of computer programming. The following is how Andrew Booker described simply, the process of solving the equation for 33 in an interview on the YouTube mathematics channel Numberphile. (Link in the references)

Now for all possible values of d and z (decided by the constraints imposed on the solving algorithms) the program checks if there are corresponding x and y values such that the equation is satisfied. Furthermore, since d, 33 – z³ and (x² – xy + y²) are also integers, it must be that d is a divisor of 33 – z³, and divisors of an integer are very few. Hence the few possible d values will be tested with z instead of all integers in the range set for d.

These discoveries generated lots of excitement in the mathematics community, due to the history of difficulty of this problem and the newfound knowledge. Also, the number 42 is of special interest in popular culture because in the whimsical science fiction novel The Hitchhiker’s Guide to the Galaxy by Douglas Adams, a supercomputer calculated “42” as the “Answer to the Ultimate Question of Life, the Universe, and Everything”.

The work done on 33 and 42 are appreciated for potential advancements in Number Theory and other fields of Mathematics that may be made using the results and mathematical methods employed here and also for the arguably more directly useful computer optimization methods which also were a major pillar in making these discoveries.