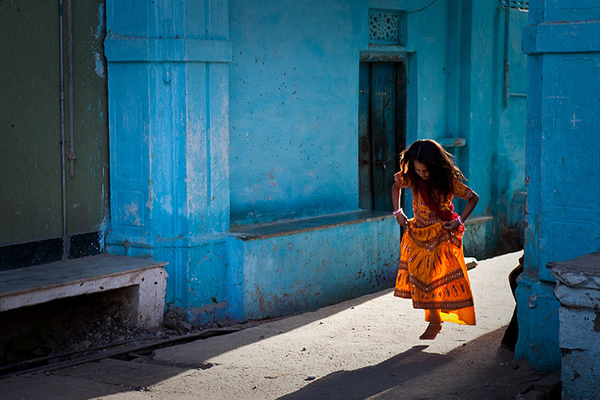 She sat in the pavilion overlooking the streets, enjoying a warm cup of ginger tea with a piece of jaggery for a hint of sweetness. Mondays are usually very busy days for most. One would certainly not have the luxury to spend time watching the crowd on the first afternoon of the week. Yet here she was, Anjali Mukherji, blatantly spending precious hours to soothe not only her heart that yearned for good tea but also her soul that yearned for company.

At 26 years old, she was engaged in a career in education and hoped to advance and remain in the same field at least for a decade or two. Unmarried, single, and an only child, her mother and maternal aunt were the only ones she saw fit to call her family. She was usually seen riding her blue scooter every Sunday on her way to the market. On Fridays, she was often spotted at the art corner of the town, painting trees, sunsets, squirrels, and the like. And of course, how can one forget Kasper, the brown Labrador that had accompanied her these last few years? Her mother was on the lookout for a suitable partner for her one and only daughter, who was, in her words, too silly to find a good man. Her aunt was forever entertaining guests, hoping for some worthy lad to take a second look at her niece. And as if this wasn’t troublesome enough, came an economic crisis. Yet there she sat, at the large window on the first floor of a building on the main street of the town, calmly partaking in a cup of steaming brown.

‘The whole world could go up in flames and you’d still find Anjali calm, quiet and unrushed’. This was a common consensus among anyone and everyone, who knew the Mukherjis. While many praised the young woman for her steady and peaceful demeanor, there was no lack of criticism either. One could not help but wonder if she really did not care about how her family was struggling to make ends meet, all the while not stopping the hunt for a suitable son-in-law and nephew-in-law. Well if she did care, she certainly hid it well, for was there not that one time, when her own mother lamented over her fate of having given birth to an unfeeling daughter?

One could say that she did indeed not care. Never had she spoken two words with her mother, if one was more than sufficient. Never had she taken the time to see if her aunt was doing fine. Never had she helped prepare a meal, set a table, or even help sweep the floor. Never had she given a cup of water at the least to her mother. Never had she wished either of them on their birthdays even. Yet, one could also say that she did indeed care. Did she not ride her scooter three miles to, and three miles back, each Sunday, to and from the market? Did she not contribute almost the entirety of her monthly income to the running of the household and the financing of their daily costs? Did she not look after and train her beloved Kasper to keep a careful watch on the house and thus its inhabitants? Did she not also be the last to go to sleep at night, thus ensuring the doors and windows were all firmly shut and bolted? One could say one thing, and another could say another. Who dare say they can make an unbiased observation? If one only knew of the former actions, or rather inactions, could Anjali be anything but a selfish and arrogant ingrate? On the other hand, if one only knew of the latter actions, who could stop them from praising the young woman for her obvious filial piety?

How strange it all is – these opinions, observations, and remarks, that everyone sees fit to impose on others and entertain others with as if it is their entitled right from birth. How much simpler things would be, if all just went about their own lives, minding their own businesses. Why bother with the lives and matters of everyone around you? Just calm down and take things slowly. People need to learn how to relax, sit down, and enjoy a good cup of tea. There’s nothing like a piping cup of brown goodness to soothe tense nerves, calm ruffled minds, and warm up a person right from within.

And that is precisely what the young Miss Mukherji did every Monday afternoon. On the very first day of the week, she went to seek solace and comfort with the nourishment of both the body and the mind. Watching the vendors on the streets overlooking the window she sat at, became her favorite pastime. She loved watching Mr. Rajeev at his little bookshop. All those intriguing paperbacks and the rare hardcovers, ranging from the ever-popular romances to detective stories to volumes of poetry and even collections of ancient stories. Observing people come to the little shop, browse for books aimlessly, then suddenly come across one that piques their interest – how enjoyable it was, to watch the reactions of these people down below; to watch their emotions go from calm and lazy to interested and attentive within a span of seconds. Or to come across the young student, finding a nice little romance of the written kind, to giggle over. Or to spot the enthusiastic scholar on the lookout for unique and rare stories and manuscripts. And how can one forget the occasional old gentleman or lady, out to find a little something to pass the time? Reading a book was always an adventure. But watching others read books or discover books to read, were adventures in their own right.

Next to Mr. Rajeev’s bookshop, was a lively restaurant that was, at any time of the day – or night – entertaining customers. From dosa and samosa to biryani and koththu roti, Mr. and Mrs. Moragoda’s restaurant served all the usual local favorites. Devout Buddhists, the large white Buddha statue in the central position of the restaurant was where they prayed each morning and evening – at least that was the word around. On the first floor of the building right opposite the one she frequented, was a tailor’s shop, owned by the Nadars. While she sat there each Monday afternoon, she would see Mr. Nadar, worshipping and praying to the figurines of two well-known Hindu deities – Lord Ganesh and Goddess Lakshmi – the God of wisdom and remover of obstacles, and the Goddess of fortune and wealth. The gold figurines shone glaringly in the harsh afternoon sun, but the devotion of those, who worshipped them, seemed to overshine them by not a degree or two. The shop may have been small, but it was by no means, unpopular or deserted. If one needed to stitch a saree jacket or dress or get a sarong or pair of trousers sewn, or even if one wanted to get a piece of clothing mended or darned, one came to Mr. Nadar’s shop, where the quality of the products far outstripped the condition of the shop’s interior. And what about the traveling vendors, selling peanuts, corn, and the ever-famous kadala parippu, the newspaper sellers, trying to attract people to the latest news, and of course the random little girl playing hopscotch, barefoot on the burning pavement?

Watching all the people go about their lives and businesses, gives such a strange feeling to oneself. It feels like one got a glimpse at another’s life. It is indeed like so. When one sees a neighbor go to the post office, does that not signify the existence of a letter or telegram, that is perhaps of some importance? When one sees a friend visit a restaurant with his/her entire family, does that not signify some special occurrence or event? All these inferences can be made by making a single small observation – the kind Anjali Mukherji liked making. It was the thrill, the excitement and the anticipation one gets, at being privy to some incident or knowledge that is otherwise unknown by others, that drove her to her now regular habit – the Monday afternoon tea.

When one is lonely, one craves company. Yet loneliness is such an odd thing, that the lonelier one gets, the more one wishes to not have company. What a contradiction one finds themselves at. You want company, yet you also don’t want it. A problem indeed. But must one mope around and lament their fate for all eternity, or should one attempt to arrive at some sort of salvation, at the least? A solution was required for the problem at hand. A solution was obtained for the problem at hand. Thus, the town Anjali lived in, saw her ride her scooter to the market each Sunday and go to the art corner each Friday. The town she lived in, saw her live her life in perpetual calmness. The town she was born in, saw her lead her life in a seemingly uncaring and unfeeling manner. That town she grew up in, saw her frequent that pavilion on the first floor of that building on that busy street, each Monday afternoon, without fail, come rain or shine. Thus there she sat, in the pavilion overlooking the streets, enjoying a warm cup of ginger tea with a piece of jaggery for a hint of sweetness.