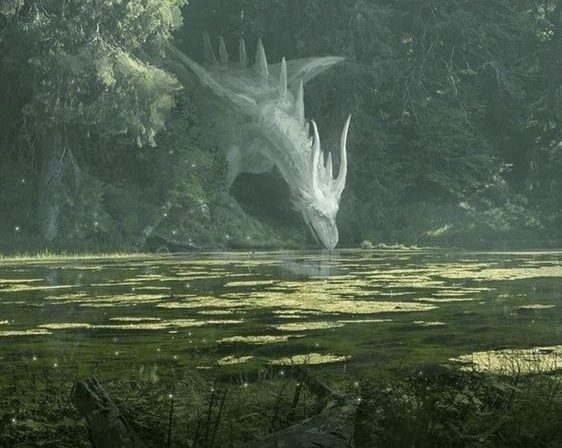 A walk through the mystical forest,

Each step taken blending flawlessly with the sound of nature.

Tales of folk are told by the townsmen,

Of this magical place ever so enchanting.

The sight of the lake before me,

As I close my eyes and imagine these tales

The townsmen tells tales of a dragon,

That calls the mystical forest her home.

Her scales of pearl, and gemstones,

With an occasional touch of gold drawing patterns,

As that you would see in marble.

She protects this ground and nourishes it,

The very ground her ancestors lie,

The last of her kind, her lonely tears gave life,

To this magical place ever so enchanting.

These tales of her sparks another feeling in some,

Only God knows the value she holds.

So they begin their journey of greed,

Often turning a deaf ear to the warnings of the townsmen,

Of what comes to those ignorant enough to even have such a thought.

They search and search the mystical land,

And when they finally find her they draw their weapons of weak,

Then they stand silently for a moment,

Enchanted by her hauntingly beautiful Goddess.

The light reflects from her scales onto their weapons,

Weapons of weak disappear into dust under the light of the sky.

Sometimes, even death is sweeter than the curse that falls upon.

I open my eyes as I sense the change in the atmosphere.

The tales of folk seem to be true after all.

There she was, with her haunting beauty,