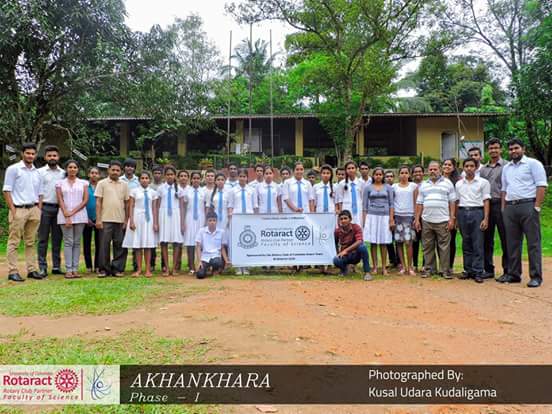 In Sri Lanka, we have thousands of rural schools and thousands of sisters and brothers who study with very little resources. As students who are gifted with free education, we have a responsibility to lend our hand for the wanted ones in our society. So the Rotaract Club of Faculty of Science, University of  Colombo did the Akhankhara project and implemented our duty without limiting it into a thought or a word. Akhankhara project is one of our community projects and it was done in three phases.

In Akhankhara phase 1, we gave our contribution to Illukumbura kanishta vidyalaya in Avissawella by conducting a series of seminars for O/L students. There were 25 students in grade 11 class and our main target was to cover their mathematics, science and English syllabus as a revision series. We did our best for them by doing model papers and past papers during the three month period from September to November in 2016. Here, we would like to gratefully remind our colleagues, non rotaracters who helped to make it a success.

When we came to the end of the seminar series those students were not just students for us, they became our own sisters and brothers. As a motivation for their educational aspects, we planned a small day out for them to our University. Also, we did not forget to make it a memorable day in their life. We brought them to Katunayaka Bandaranayke International Airport, the Independence Square and Mount Lavinia beach. That school showed 100% Results in O/L examination and we have achieved the goal of our project. When we talk with the students, we were able to know they are schooling just as a habit and they did not have any idea or hope about higher studies or even about Advanced Level Examination. Most of them were about to leave school after grade 11. But at the end of  the our project, there was at least a small idea and a big hope in their eyes.

In phase 2, we selected Padaviya area to donate gift packs for students and school equipments. Padaviya is a rural area which is 98 km away from Anuradhapura town. Most of the villagers are farmers who do not have a stable income. So the parents cannot provide the facilities and requirements for their kids. So those students leave the school beforehand and give their energy to build up their family income beginning from a small age. We selected two schools in Padaviya and gifted a pack of books with a lunch box and a water bottle for each student. Akhankhara phase 2 was held on 12th and 13th January 2017 and it was a new  year gift for their new classes. Padaviya C Yaya Kanishta Vidyalaya is a secondary school which has 212 students and we donated musical instruments and clothing material for school prefects’ blazers. Second school was Bellankadawala primary school with 47 students. We donated a Computer table, a chair and a printer as well. The Principal of the school was very thankful and mentioned they were essential equipment for the students, but they have been unable to afford them till that day. The most surprising and heart touching part of this event was their  performance. They performed small dancing items for us. The way they hugged their gifts with a blooming smile in their innocent faces was a heart touching pleasure which we cannot gain through money. Last Phase, the third phase was held on 5th, 6th of May 2017 in Gonadeniya Kanishta Vidyalaya in Udugama, Galle. There are 252 students studying there. On the first day, there was an art and essay competition during the school time. Our colleagues spent the day with the small kids and they became friendly with us just in a moment. We played cricket, volleyball and netball with them. In the evening we started renovating the two storied building with tons of dust and lots of rats. During the night there was an astronomy camp for villagers along with the students and they were very happy and excited about the experience they had that day. It was conducted by the astronomy society of the Faculty of Science in University of Colombo. On the second day we renovated their open theatre, shrine and two storied building. It was hard work, but with lots of inside jokes and laughs everything became a success. That was the end of the Akhankhara project.

We did our Akhankhara project in three different areas in the country. But there was no difference in the warm welcomes and hospitality we received. We were always treated very well and they appreciated and encouraged us to do more. Winning their hearts is the real achievement and seeing their smiling faces with shining eyes is the real meaning of Akhankhara!