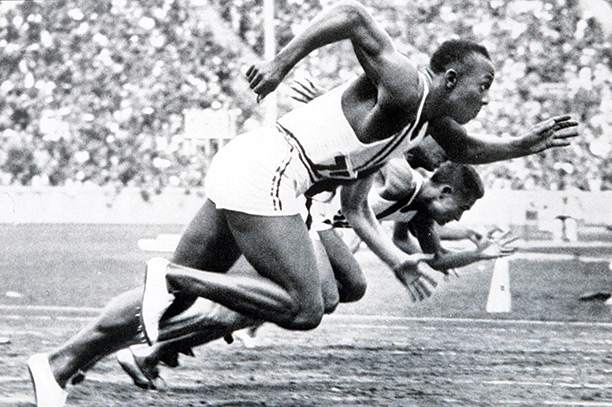 “You can melt down all the medals and cups I have and they wouldn’t be a plating on the 24-carat friendship I felt for Luz Long at the moment.” – Jesse Owens

We can all agree that the patriotism of Olympic athletes is an ideal of the Games that never fails to inspire us. But, one Olympic Games became special for a different reason.

The 1936 Olympic Games held in Berlin, the capital of Germany was the perfect place to showcase the supremacy of the Aryan race. At least in Hitler’s mind. But what he did not expect was a strong and competent athlete striving to make a difference, who pushed past all the controversy and gave a fitting response to him in the form of a staggering total of 4 gold medals at a single Olympic Games.

The athlete, who shattered the ideals of the dictator, was none other than the legendary James Cleveland Owens otherwise known as Jesse Owens. Born in the United States of America to African American parents, Jesse was the youngest of ten children. At the age of nine, his family moved from Oakville, Alabama to Cleveland, Ohio as a part of the Great Migration, when 1.5 million African Americans left the segregated South for better opportunities. 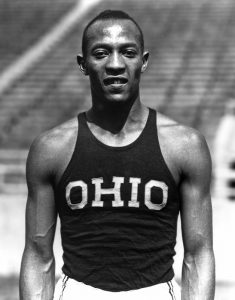 Moving to Ohio was the first step in Owens’s career as an athlete. The second took place in school when his new teacher asked his name. Since his family always called him J.C. he replied with that name but, due to his strong Southern accent, she heard it as Jesse. The name stuck, and he was known as Jesse Owens for the rest of his life.

It was in his youth that Jesse realized his passion for running and he took it to greater heights with the encouragement of his junior high track coach Charles Riley. Indeed with his constant support, Jesse was able to achieve every athlete’s goal of conquering the Olympic Games.

Through perseverance and dedication, Owens won many championships, yet he faced oppression, all because his skin was a few shades darker than the norm.  When traveling with his team in the USA, he was restricted to ordering takeout or eating at black-only restaurants and could only stay at black-only hotels. The most disheartening fact was that, although Owens made great achievements, he did not receive any scholarships. Therefore he had to work part-time jobs to pay for school.

The racism that Jesse Owens faced in his home country extended to the 1936 Berlin Olympic Games, where Nazi propaganda depicted Africans as inferior and where the very instigator behind these chauvinistic claims was a regular spectator.

But Jesse Owens managed to complete a feat no other Olympian had achieved by winning gold medals in the 100 m, 200 m, 4100 m relay, and the long jump, successfully silencing Hitler’s voice. This record lasted a whopping 48 years before compatriot Carl Lewis broke it at the 1984 Olympic Games.

Although all his wins captured the world’s attention and showed that Owens had triumphed against the unfairness of racism, it was his second medal that taught the world the true meaning of friendship.

It was on the 4th of August. Owens started the day incredibly, winning the 200 m qualifying round with an Olympic record of 21.1 secs early that morning. But, during the qualifying round for the long jump, Owens failed to see the judges raising their flags indicating its commencement.

Still in his tracksuit, he took a practice run down the approach and into the pit, only to realize that the judges counted it as the first of his three attempts. Disconcerted, he fouled his second attempt as well leaving him with only one more jump to ensure his place in the finals later that day.

Jesse Owens had one last attempt and he needed a plan. It was at this moment that German long jumper Carl Ludwig “Luz” Long bestowed advice on Owens much to the chagrin of his rulers.

Luz Long was a prominent long jumper, having won numerous long jump championships. He was tall, blond, and blue-eyed, a personification of the ideal Aryan according to Adolf Hitler’s theories. He was a favorite among the German rulers to prove the dominance of the Aryans. So it was with great courage that he suggested Owens shift his mark back and take off well short of the board, removing any possibility of fouling again. Because he accepted Long’s advice, Owens was able to qualify for the finals alongside Luz Long. 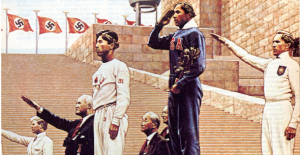 The final was a close match between Long and Owens, with Owens emerging the victor with an impressive jump of 8.06 m. Luz Long came in second place with an admirable leap of 7.87 m. Hitler was absent when Owens made his winning jump, having left once he realized that Long would not be able to catch up with Owens. Though the German rulers were disappointed, Long was not. He showed incredible sportsmanship after the event, being the first to congratulate Owens and later they walked, arm-in-arm, around the stadium posing for photos together.

Owens found an unlikely ally in Long and his friendship and sportsmanship stayed with Owens for the rest of his life even after Long lost his life in 1943 during World War II. In the last letter that Long sent to Owens he writes,

“My heart tells me, if I am honest with you, that this is the last letter I shall ever write. If it is so, I ask you something. It is something so very important to me. It is you go to Germany when this war is done, someday find my Karl, and tell him about his father. Tell him, Jesse, what times were like when we were not separated by war. I am saying – tell him how things can be between men on this earth.”

This personal story of camaraderie is reflected in the words of Jesse Owens himself. “Friendships born on the field of athletic strife are the real gold of competition. Awards become corroded, friends gather no dust.”