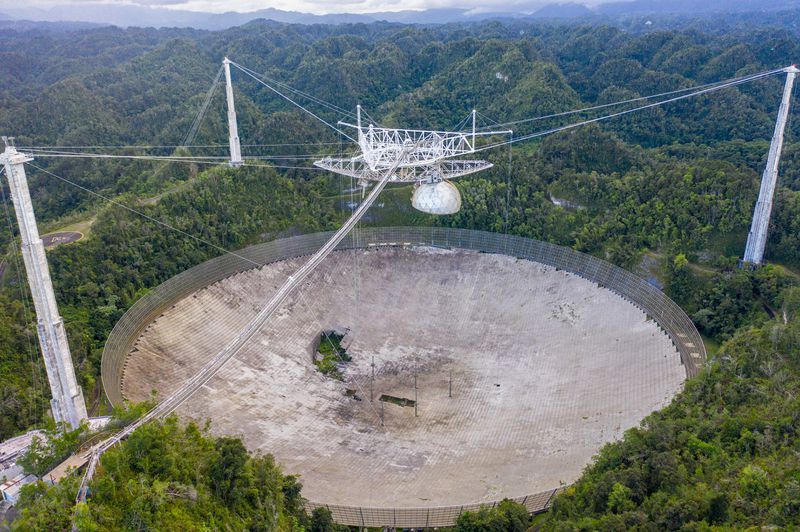 On November 16, 1974, the most powerful broadcast ever deliberately sent to space was sent from Earth. The broadcast was a project by the SETI (Search for Extra-Terrestrial Intelligence) with the intention of contacting alien life beyond our solar system. The transmission consisted of a simple pictorial radio emission targeted at the M13 globular star cluster 21,000 light-years away. This turning point of the history of mankind trying to find life beyond the Earth happened thanks to a particular telescope in Puerto Rico named Arecibo. 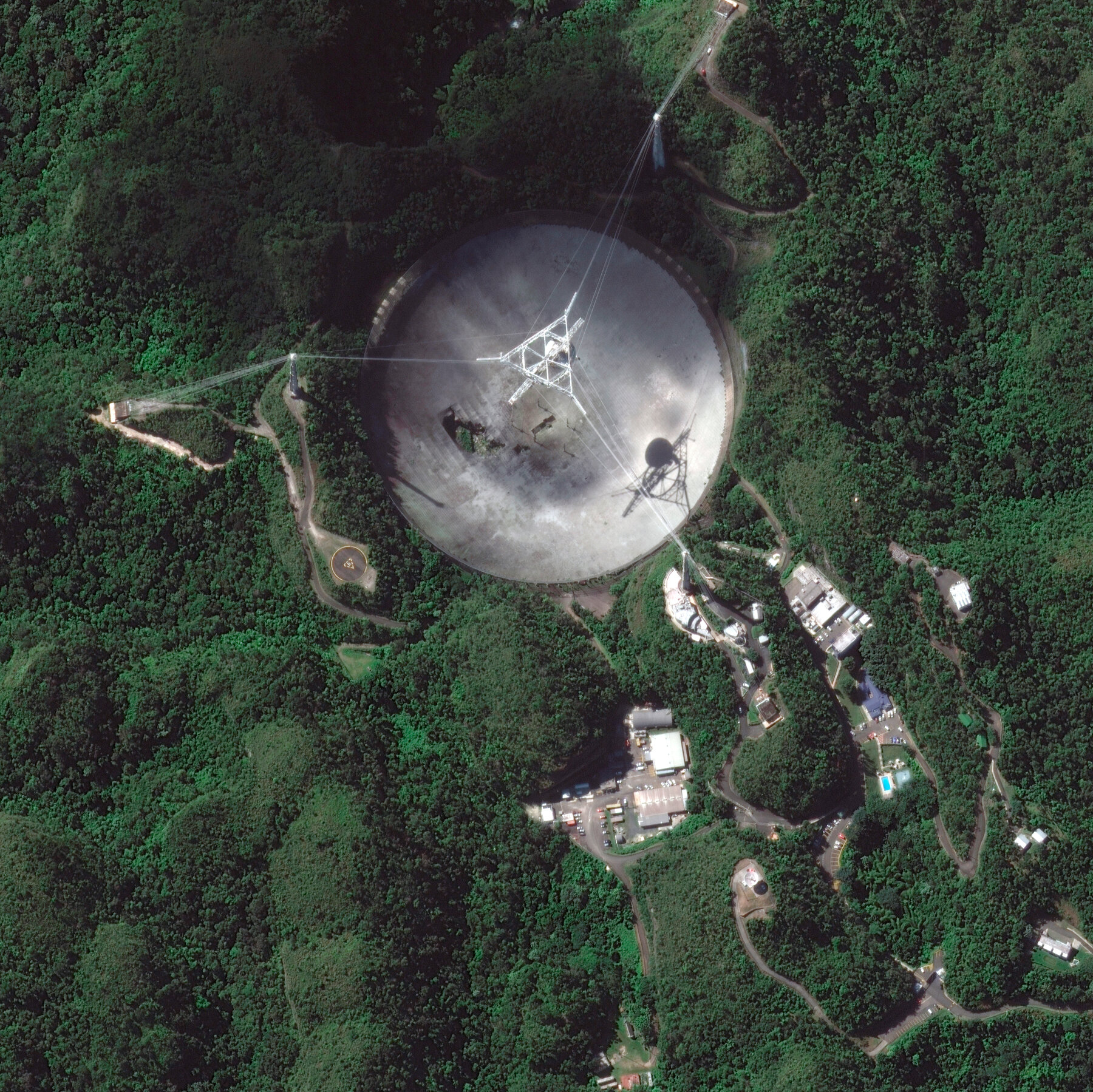 Arecibo observatory was built in 1963 16 km south of the town of Arecibo in Puerto Rico. It was the world’s largest single-dish telescope for five decades until 2016. The 1000 feet (305m) diameter disk of the telescope was built into a natural bowl-shaped depression with a movable antenna structure placed 450 feet (168 m) above the reflector surface. The observatory also had an auxiliary 30-meter telescope that served as a radio interferometer and a high-power transmitting facility used to study Earth’s atmosphere. Overall it was considered one of the most powerful radio telescopes on Earth.

Despite the poor resolution, as radio astronomy is a whole different field of telescopy and astronomy Arecibo was one of the most important telescopes in the world. Unlike visible light, radio waves are not deflected or scattered by the atmosphere. Also, the sun itself is a poor source of radio waves and clouds, rain or even storms doesn’t affect the readings due to the long wavelengths of the radiation. Hence, radio telescopes can obtain readings twenty-four hours a day. Also, some objects emit little to no visible light but are strong radio sources. So only the radio telescopes can observe them. In addition, visible light may be absorbed by interstellar dust and wouldn’t reach the earth. However, radio waves are generally unaffected by intervening matter so radio telescopes can observe the celestial objects beyond the interstellar clouds.

Arecibo telescope, with its antenna hanging above was not a steerable telescope. It was only capable of observing sources that pass within 200 of the zenith as Earth’s rotation carries them overhead. The objective of constructing the Arecibo observatory was for tracking planets and probing the ionosphere and the upper atmosphere. However, soon after completing its construction, it was used as an all-purpose telescope including its contribution in the search for extraterrestrial life.

Since its construction, Arecibo has gone through numerous new additions and modifications over the five decades of service. In 2012, Arecibo joined with telescopes in Europe and with the Russian Radio Astron satellite to form the largest telescope ever, which is 20 times the size of the Earth. 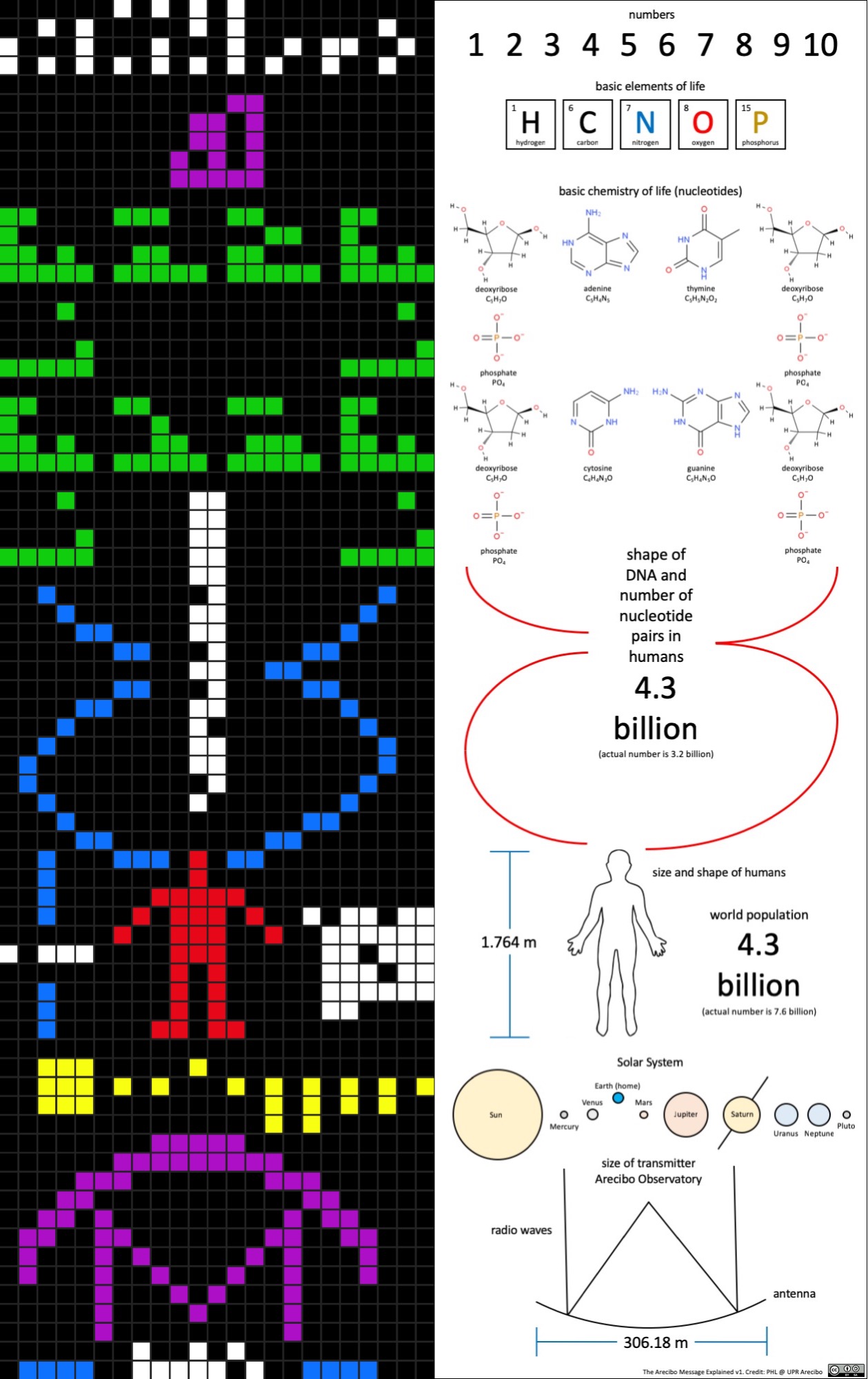 Since its construction, the Arecibo made countless new discoveries for the field of Astronomy.

One of its very first accomplishments was establishing the rotation rate of Mercury which turned out to be 59 days rather than the previously estimated 88 days. It also discovered ice within the shadowed crater of mercury later in its service years. In 1974 it discovered the first pulsar in a binary system leading to an important confirmation of Einstein’s theory of general relativity and a Nobel Prize for astronomers Russell Hulse and Joseph Taylor. In 1974 it broadcasted the SETI message. It also involved in producing the first geological surface maps of Venus which cannot be observed with optical telescopes due to Venus’s thick atmosphere.

In the early 90s, Arecibo discovered the first planets outside the solar system with three Earth-like planets orbiting pulsar B1257+12. In 2003 Arecibo found the first evidence of hydrocarbon lakes on the Saturnian moon Titan. In 2004 Arecibo focused on thousands of star systems in the 1000 MHz – 3000 MHz range for discovering extraterrestrial life, but unfortunately, no such signal was found.

In addition to numerous discoveries in planetary sciences, atmosphere studies, and search for extraterrestrial life, Arecibo actively involved in detecting NEOs (Near Earth Objects) including many potentially threatening large asteroids.

After 53 years of service, the first sign of its end was showing on August 2020 when a cable holding the antenna structure above the disk snapped creating a hole in the disk. In November a second cable broke. Thereafter, the NSF (National Science Foundation) announced the telescope was in danger of collapse and the cables could not be safely repaired and thus planned to decommission the observatory. Days after the NSF announcement on December 1, 2020, the cables broke and the observatory hanging above crashed onto the disk. 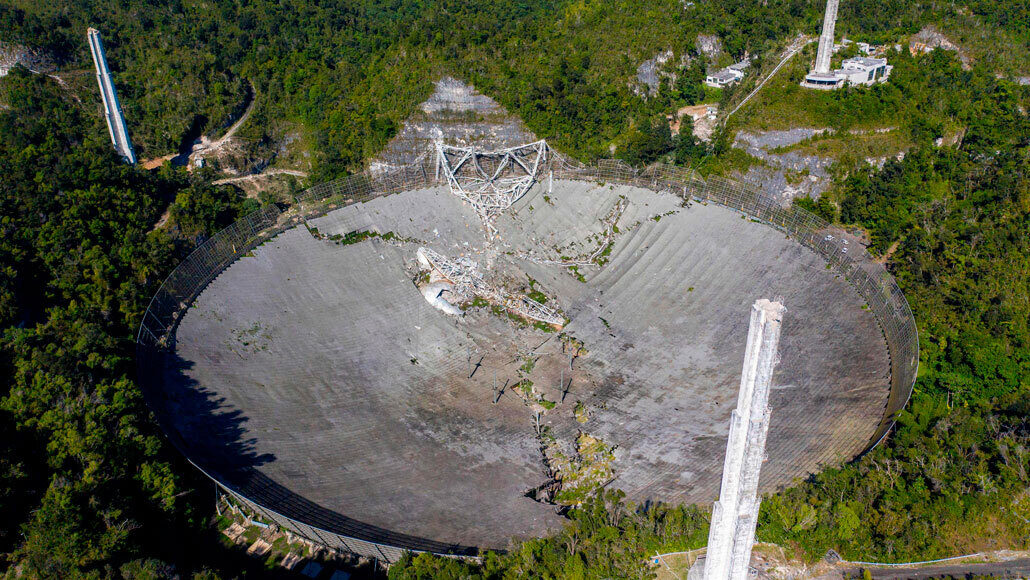 Arecibo was one of the greatest tools mankind had in its golden age of reaching out to the universe and its greatest contributions to the man in its decades of service will be remembered for millennia.