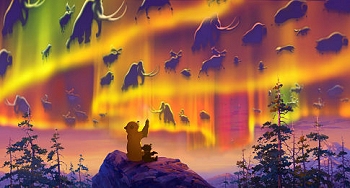 The Aurora are illuminations in the sky which glow in various forms like swirls, shooting rays, ribbons, patches and arcs. They may appear in different colours such as red, yellow, green, blue and violet .However, they most commonly appear in pale green and pink.

Frequent, explosive collisions between gas molecules occur above the surface of the sun. This leads to the emission of free electrons and protons which exit the sun’s atmosphere through holes in the magnetic field. They are transported towards the earth by solar wind and are mostly deflected by earth’s magnetic field. However, the magnetic field is weaker at the poles and therefore some of these electrons and protons enter earth’s atmosphere. These charged particles collide with gaseous particles in earth’s atmosphere emitting lights which are seen as the Aurora.