The world we live in consists of several ecosystems with vast diversity that enhance and support the survival of all the living beings on earth. Among them, there is this one type of habitat which barely considered and less protected but provides numerous benefits to the entire living world, especially humans. They are none other than Wetlands.

In the past, wetlands were considered as a place of waste dumping and they were reclaimed for developmental initiatives by humans without considering the services provided by them towards the environment. However, with increasing knowledge, humans have understood that wetlands are one of the most valuable types of ecosystems that we depend on, and are highly vulnerable to changing climate and destructive human interferences. Wetlands can be simply considered as habitats with a permanent or temporary accumulation of water with associated floral and faunal communities.

The interest that grew in the human mind towards protecting wetlands led to the formation of the Convention of Wetlands known as the Ramsar Convention. This document was adopted in the city of Ramsar of Iran on 2nd February 1971 and came into effect in 1975. To commemorate this day of documenting the convention and raising awareness globally about the vital role of wetlands for people and our planet, World Wetlands Day is celebrated on the 2nd of February annually.

What is Ramsar Convention?

The Ramsar Convention is the intergovernmental treaty that provides the framework for the conservation and wise use of wetlands and their resources. In this convention, wetlands are defined as, “Areas of marshes, fen, peatland or water, whether natural or artificial, permanent or temporary, with water that is static or flowing, fresh, brackish or salt, including areas of marine water, the depth of which at low tide does not exceed six meters”.

Managing and protecting wetlands have become a global need and the convention currently has 171 countries as contracting parties that promote and assist in wetland conservation. The Convention’s mission is the conservation and wise use of all wetlands through local and national actions and international cooperation, as a contribution towards achieving sustainable development throughout the world. Under the “three pillars” of the Convention, the contracting parties commit to:

In this year, 2021, the theme of the World Wetlands Day celebration is “Wetlands and Water” which highlights wetlands as a source of freshwater and encourages actions to restore them. Currently, the whole world is facing a serious freshwater crisis in which approximately 2.5% of the water on earth is fresh water and less than 1% of the available freshwater is usable. With the intervention of humans in natural ecosystems and processes, this amount has further lowered. Also, we are consuming more freshwater than nature can replenish. Water and wetlands have an inseparable connection that is vital for the life, wellbeing, and health of our planet. Therefore, this year’s theme elaborates the significance of protecting wetlands in maintaining the quantity and quality of freshwater of our planet. 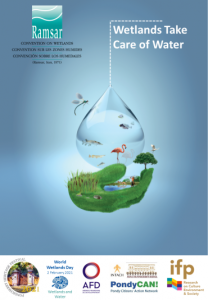 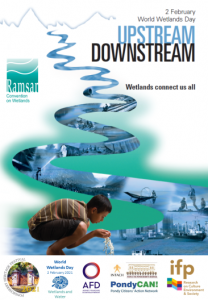 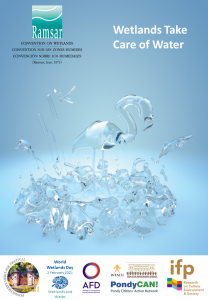 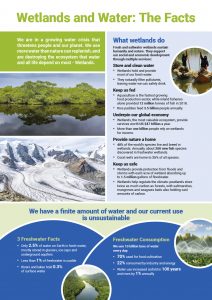 Wetlands are among the most diverse and productive ecosystems. They provide most of the essential services of humans including the majority of our freshwater needs. Wetlands are considered as Cradles of Biodiversity as they provide a home for a vast number of plants and animals. Also, for humans, they provide unique services in flood control, food production, groundwater recharge, and climate change mitigation.

Sri Lanka holds a special place when it comes to wetlands as it consists of a large number of them. Wetlands in our country that tally with a Ramsar definition can be divided into three broad categories such as

The Ramsar convention entered into force in Sri Lanka on 15th October 1990 and currently, Sri Lanka has six sites designated as Ramsar wetlands of international importance with a total land area of 198,172 hectares. These Ramsar wetlands are 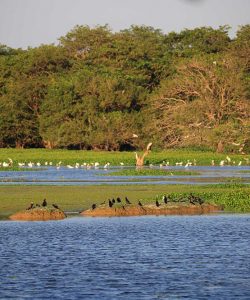 These wetlands consist of a vast diversity of flora and fauna belongs to numerous species.

Apart from the above-mentioned wetlands, the city of Colombo has been accredited as a Ramsar wetland site during the 13th Conference of the Parties to the Ramsar Convention on Wetlands (COP13) in Dubai on 25 October 2018. In Colombo, several main urban wetlands can be identified mainly such as Baddagana wetland, Diyasauru wetland, Heen Ela wetland, Kolonnawa wetland, Kotte wetland, Maddinnagoda wetland, Mulleriyawa wetland, and Thalangama wetland. 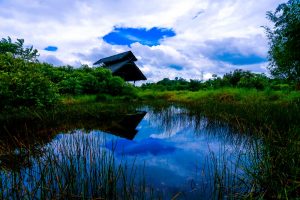 Although wetlands are precious resources to be protected with higher regard, many threats can be observed. These threats can be summarized under four main categories: habitat loss and fragmentation, direct loss or exploitation of species, the spread of invasive species, and natural phenomena.

Habitat loss mainly occurs due to the filling of wetlands and acquiring them for development programs. The aquaculture industry also has caused the loss of lands belonging to wetlands. Habitat fragmentation occurs due to artificial constructions like roads that divide the wetland ecosystem.

The introduction of alien species has imposed a serious threat to native species that grow in wetlands. They competitively exclude the native plants and animals which are very important in maintaining the balance of the ecosystem.

Except for these direct human impacts, some other natural phenomena like prolonged droughts affect the survival of wetlands. The rise of seawater temperature due to climate change has resulted in coral bleaching and saltwater intrusion as a result of sea-level rising has adversely affected the cultivations like Paddy.

How can we protect the wetlands?

In Sri Lanka wetlands are protected under the Fauna and Flora Protection Ordinance of 1938 and its amendments. Ramsar convention has also explained about the “Wise Use” of wetlands. The concept of Wise Use has to be followed by all the contracting parties to the convention and they should be committed towards the proper use of wetlands and water resources in their territory through national plans, policies and legislation, management actions, and public education and awareness. This wise use concept includes maintenance of the ecological character of wetlands within the context of sustainable development.

Wetlands affect every bit of human life as well as they have a huge impact on the survival of all the animals and plants. As the most civilized organism on earth, it is our responsibility to take the initiative in protecting wetlands for the sake of all the other living beings. Therefore, let us try to make this year’s World Wetlands Day, an opportunity to re-think the services rendered by wetlands especially as a freshwater source, and extend our maximum support in conserving them for our future generations.