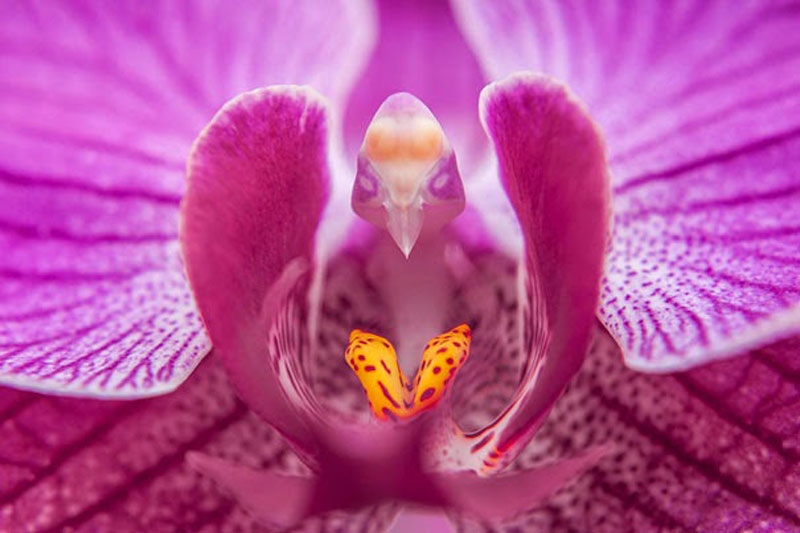 “It was a rough day after work, where I picked up a scent that filled me with the sensation of temptation. There she was, just 30 cm away. Zig-zag I went, and without hesitation, I grabbed her lip. My colleagues too had the same idea. It was a fight, they pushed, and I pushed harder, struggling for the big climax! And I won!”

Sadly, it wasn’t a female wasp that “Mr. Wasp” mated with, but an attractive orchid flower

Extending from meters to plants nearly invisible to the naked eye, blooming from the treetops to underground, orchid species have outnumbered the collective species record of birds, reptiles, and mammals altogether. The countless elaborations of orchid flowers all over the world have made a significant mark on the flora and faunal relationships. With the urge of pollination and flowers being the reproductive structure of a plant, their adaptations to pollinate through insects are indeed fascinating. Unlike flowers that possess nectar for insects, orchids have other tricks up their sleeve.

Orchids pretend to be an insect’s mate, mimicking their pheromone scents and appearance that convince insects to have sex with them.

The female thynnine wasps (Zeleboria sp.), are flightless and spend much of their adulthood underground, laying eggs within the soil. “Mr. Wasp” is always attracted to the pheromones that his female partner releases when she is ready to mate. But the semiochemicals (organic compounds used by insects to convey specific chemical messages) in Caladenia plicata, an orchid species, are the sex pheromone components of female Zeleboria sp. This attracted “Mr. Wasp” to mate with the labellum(lip) of Caladenia plicata.

This sexual deception is achieved by blending two independent biosynthetic pathways to produce floral volatile compounds (S)-β-citronellol and 2-hydroxy-6-methylacetophenone in a 1:4 ratio. This has been confirmed by field bioassays. Studies have revealed that 2-hydroxy-6-methylacetophenone was not previously identified as a floral volatile compound and it was later converted from (S)-β-citronellol in chemical synthesis within the sepal tips.

When “Mr. Wasp” grabbed the labellum(lip), the flower arrangement with the hinge allowed him to be flipped into the flower with his enthusiastic motion, covering himself with pollen. He might do this again, allowing his pollen covered body to fertilize the stigma of another flower of the same species. These orchids are considered to be parasites, as they do not produce nectar or any form of edible reward that the insects can collect in their visits to pollinate.

Not only for wasps, the Bee Orchid (Ophrys apifera) with its velvety labellum resembling a bee body, attracts male bees, deceiving them to have sex.

These floral patterns have been selected from nature where the orchid flowers steal the communication channels used by male and female bees during their courtship. Studies have revealed that bees localize on certain other flowers than orchids to mate. This is due to the species-specific floral spectral of interest. The orchid species started to mimic these signals along with the pheromones of female bees to attract their pollinators.

The presence of ultraviolet spots invisible to the human eye has been a seduction site for most insects. Some orchids resemble a location where insects can lay their eggs. Some species have the color and texture of rotting meat along with their scent, which draws flies to lay eggs within the flower and without knowledge, pollinating the plant.

Over time, more orchid species have formed due to random genetic variations which might have been a correlation with the insect species of interest. Even orchids resemble human-like monkey figures.

Sexual deception of orchids is an intriguing interaction where they secure species-specific pollination by sex pheromone mimicry. Even though evolution is not always about attraction, it has been evident that “Mr.Wasp” had been pretty much deceived today, and perhaps even tomorrow, with a plant species that has even outlived dinosaurs.