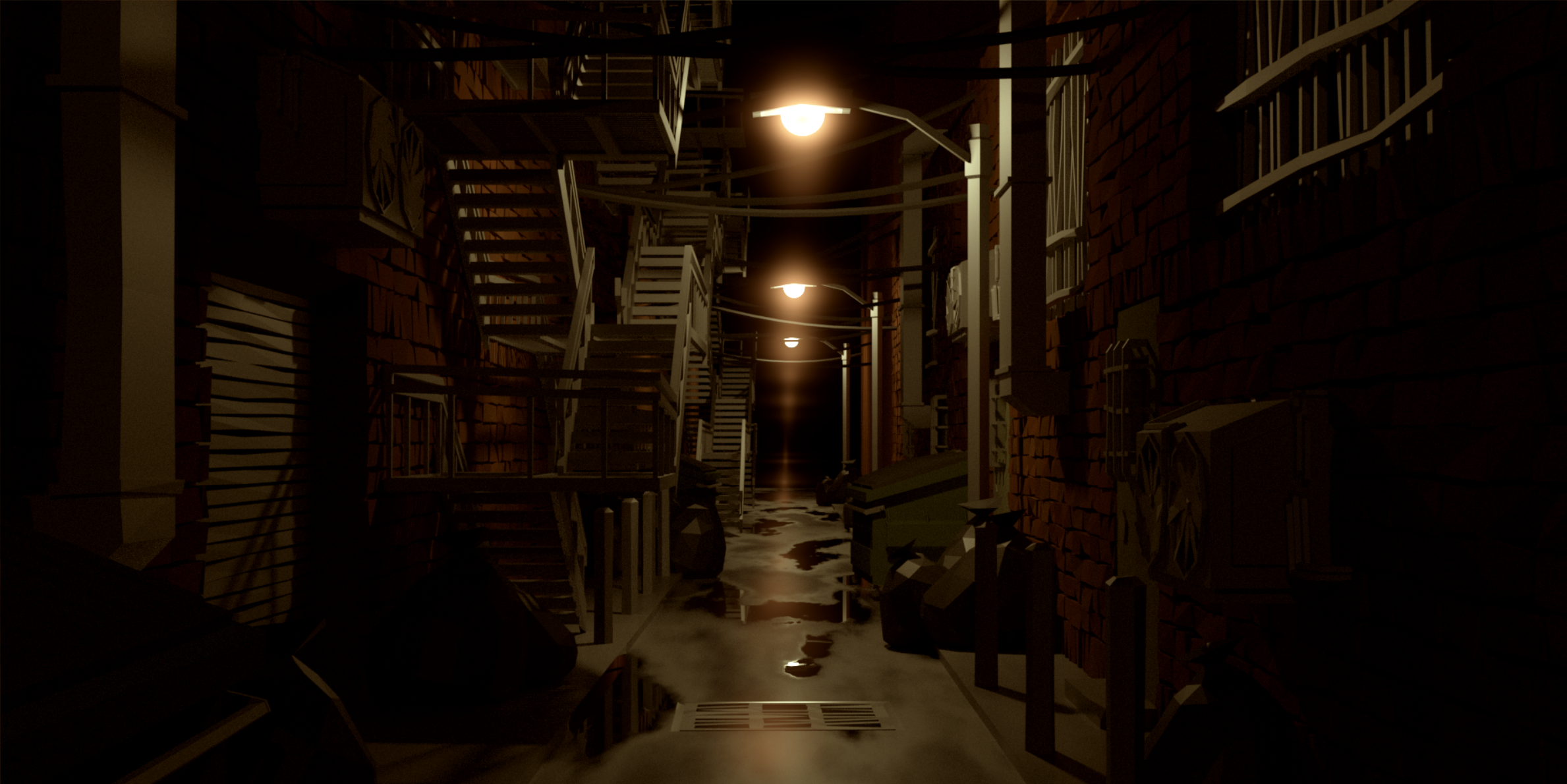 There in the dark alleyways, amidst the homeless, despaired, and the desperate, a presence “lurks”. It looks into the eyes of those that pass it. It follows those eyes too. “Stalks”, would be the better term. Scraggly beard, wild eyes, and pale skin, a man slouched by the dumpster. This section of Detroit was known for its users, those who’ve fallen in a black pit of Heroin.

A needle poked through his vein as he closed his eyes and shuddered as the high took over. The slight rustle went amiss to him. In a moment of hazy consciousness, he opened them only to stare back at a pair of eyes that made his heart freeze over. The scream that followed echoed through the alleys of Detroit all around.

It’s an evening set heavily with dusk in the warm and humid month of July, 1987. Clouds had gathered over the line of apartments in the city metropolis. Grey clouds, heavy with the sighs and tears of a million people crawling in the streets of Detroit. Throwing away a candy bar wrapper in the nearest trash can, I get in my car and set out for the local bar and restaurant. Not in the mood for anything heavy, I settle my mind on ordering a very small dish and just spending my time watching the common public engage in an evening of activity. Bored of the noise of the cheery talk around me, I head out and get in my car.

I drive to the gas station as the temperature drops with the oncoming gloom. The street lamps were being turned on, their flickering lights a reflection of the broken neighborhood. Faces stared out through the openings of the alleyways, haphazard and straggly. I stared back as I drove past them, the outskirts of the city my destination. The bulb-lighting of a gas station caught my interest.

“Doubt there’ll be much going on,” I say to myself, my gaze fixed on the impending sky.

And with that I pull out of the gas station heading towards “The Evening Star”, a well-known establishment for food, pool, dancing, and enjoying one’s free time. Little hidden fact, it was also a gathering spot for the more “freaky” of the mind. The line, “Just because you’re paranoid, don’t mean they’re not after you” played in my mind. Finding parking was relatively easy though on this day.

“Looks like I’m not the only one who looked at the sky,” I said to myself as I got out of my car.

Adjusting my jacket and shades, I step in to “The Evening Star”, aptly named as Venus was visible even on this cloudy evening. And the hours clocked by, leaving me in my train of thoughts. A light dinner followed by a warm mug of coffee was my accompaniment as I watched the few people in today go about their lives. An hour or two later, the crowd thinning as much as it was happening conversely with the clouds, I got up from my warm and comfortable seat.

The neon pink and luminescent colors of the jukebox drew me in like a moth to a flame. Putting a quarter in the slot, I lay back near the wall as “Riders on the Storm” by The Doors plays. It’s magic ascending piano melodies and slow-burning jazzy drumbeat making me drift off into a world of my thoughts.

Surprisingly by this time, the restaurant was almost empty, save for a trucker who came in to grab a drink before he went on his next cross country haul, the bartender who was also the waiter, and a woman I had not seen in this area before.

Like a dog without a bone – An actor out on loan

Riders on the storm

The chilling sound of the sampled ocean waves and the aforementioned drums just acting as a railway for my unbounded thoughts to wander off. If it was a bird, you could see it soar right above the sleepy suburbs of Detroit, with its broken-down neighborhood on one side of the 8-mile border and the upper-class citizenry on the other.

My thoughts, which were at this time above the stratosphere, were disturbed by the strange woman.

“Care to dance?” she implored, her grey eyes sparkling like a sheet of silver had been spread over the skies.

“I’m sorry, but I’m a bit too tired for dancing,” I reply, in a pensive and slow tone.

“Oh okay.” She says, her shoulders dropping a little.

“Are you from this area Ma’am?” I ask, out of politeness, and not to be rude. Her auburn hair curled graciously at her shoulders, her long neck adding an alluring effect to her hair.

“No, not really.” She says while her mouth curls up into a coy smile.

“Can I get you a coffee Ma’am?” I add. When she said yes, I called up the waiter and asked for two large steaming mugs of coffee. The waiter, having known me and my presence in his establishment for a long time smiles as he goes to busy himself. This was not the first time I had looked out to the skies over Detroit.

“So, do we plan on drinking our coffees while standing?” she asks me, her lips still in that same coy smile. The air around her seemed to fade out into a cozy glow.

“Not unless you want to sit down,” I reply with a smile on my face as well. We carry on to the nearest table and engage in conversation. In fifteen minutes, her hand was cradling a warm mug of very fine black coffee and was laughing at an anecdote I just said. There was a scientific refinement to her words and a mischievous, fiery sense to her humor.

If ya give this man a ride – Sweet memory will die

Killer on the road

“So you’re up here watching the skies for weird lights?” she asks me with an incredulous look on her face. The curves her eyebrows made outlined a tinge of disbelief and outrageous dubiousness.

It’s a challenge as it is to decide between what’s more magical. Jim Morrison’s vocals over the heavenly stairway of music laid out, or the expression on the face of the person right in front of me. There was an air of mystery to her. Something both familiar and yet vague in memory. Ray Manzarek’s Rhodes piano solo snapped me out of the slow veil of enchantment spreading.

“Oh, it’s an acquired taste,” I say with a slight smirk playing at my lips. An hour into the conversation I had gotten extremely comfortable with her. At which point, she had to leave for her motel. As she stood up, flicking her bright red hair over her shoulder I did too and walked her out of the restaurant. She got in her car and throttled the ignition as I leaned into her window.

“Hey, I never did ask your name,” I remarked to which she gave another coy smile.

She let out a laugh, “Fox? Do people call you that?” she laughed, her joy cutting through the gloomy July twilight.

“Call me Mulder,” I said and gave her a grin. And then I watched as she gave me another smile and backed her car out of the restaurant. My eyes were fixed on the blob of her car, going further and further away.

“Dana Scully,” I said with a smile to the earth as I too made my way to my car. Things seemed like they were about to get interesting. The Detroit skies were gloomy, but at least I had a spring to my step.