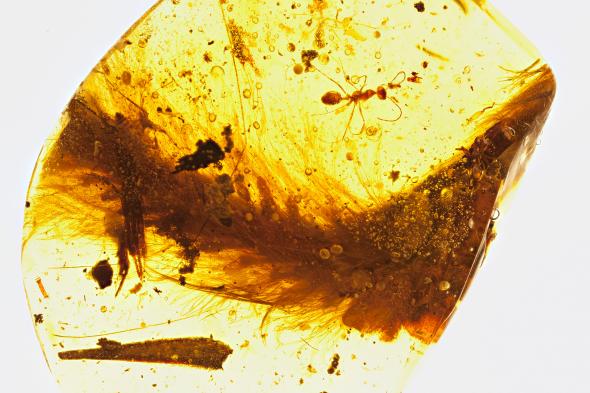 When I was small, my father used to bring me bird feathers of different colours, sizes, with various patterns that he’d found on the ground. We collected them in a jar. I was fascinated with all sorts of feathers that belonged to  crows’, peacocks’, owls’, woodpeckers’ and many other birds. My favourite was the brilliant blue feathers of the kingfishers.

For a long time, I thought feathers belonged only to birds. It is true that they help flight. However, even the flightless birds have them. The feathers did not belong only to birds, even dinosaurs had had them! The hot topic of the fossil world these days is a piece of dinosaur tail discovered in 2015 which holds proof to it. This fossil is not like any other. It is a complete piece of tail preserved in amber with bones, feathers and soft tissues.

Dr. Lida Xing of China University of Geo sciences in Beijing found this specimen from Kachin State in Myanmar. He used to visit the amber market looking for dinosaur specimens. One day, a man offered him a small piece of amber. The man claimed that a prehistoric plant was encased in it. It looked like a piece of rubber. As soon as Dr. Xing looked at the specimen, he knew it belonged to a dinosaur and not a plant. The amber held a 36.73 mm section of a tail with feathers attached. It is believed to have been preserved since mid-Cretaceous Period. Dr. Xing and Dr. Ryan McKellar, curator of invertebrate paleontology at the Royal Saskatchewan Museum in Canada, led the team that studied the amber preserved tail.

This sacred piece of dinosaur tail is important for 4 main reasons. Firstly, it holds the first non avialan theropod fragments preserved in amber. Theropods are a group of Saurischian dinosaurs, and Avialae is a clade (a clade is a group of organisms consisting of a common ancestor and all its lineal descendants, representing a single branch on the tree of life) of flying dinosaurs containing their only living representatives as the birds. It is usually defined that all theropod dinosaurs are more closely related to birds. On the other hand, non-avialan theropods are those who could not fly.

Birds are believed to have evolved from the dinosaurs. Archeopteryx lithographica  fossil from Germany is the earliest known avialan which may have had the capability of flight. Hence it is considered the ancestor of birds. It is a transition fossil. Some consider birds to be dinosaurs. Therefore birds are sometimes referred to as “living dinosaurs” in biology. The Sinosauropteryx is the first fossil of a non-avialan dinosaur with feathers. Secondly, the amber preserved fossil contains vertebral outlines, curvature, and plumage suggesting a source within Coelurosauria. According to Dr. Xing, it contains 8 vertebrae of a juvenile. This tail is about 99 million years old. It had belonged to a baby Coelurosaur, a subset of theropods which are believed to have evolved into modern birds. The third and possibly the most important fact is that the branching structure in the feathers supports a barbule-first evolutionary pattern. Different specimens of feathers in dinosaur fossils, found from all around the world have developed the idea of evolution of the feather.  However, a completely preserved specimen with developmental data has not been identified so far until this discovery. Also, interpretation of previously studied specimens was difficult due to compression in sedimentary rocks. This specimen holds well preserved fine morphological details such as the spatial arrangement of follicles and feathers on the body, and micrometer scale features of the plumage. Here, many feathers have a short, slender rachis with alternating barbs and a uniform series of contiguous barbules, supporting the developmental hypothesis that barbs already possessed barbules when they fused to form the rachis.

“All preserved feathers have a weakly defined rachis that is nearly indistinguishable from the barb rami apically and that is slightly thickened basally … The weakly developed rachis appears to have formed through fusion of individual barbs that already possessed barbules  instead of fusion of naked barbs.” (Xing, 2016) The fourth point is that there was iron within the carbonized soft tissue, suggesting traces of original material to be present. More than 80% of iron in the sample was indicated as Ferrous (Fe2+). Similar measurements have been made on vessels preserved within Tyrannosaurus and Brachylophosaurus bones. It has been interpreted to indicate iron oxides produced from decomposition of hemoglobin. Presence of large quantities of Fe2+ in this way suggests that some of the primary iron from hemoglobin or ferritin is trapped inside the specimen. This also highlights the unique preserving potential of amber. Thus it has contributed to a better understanding of the morphology and evolution of dinosaurs.