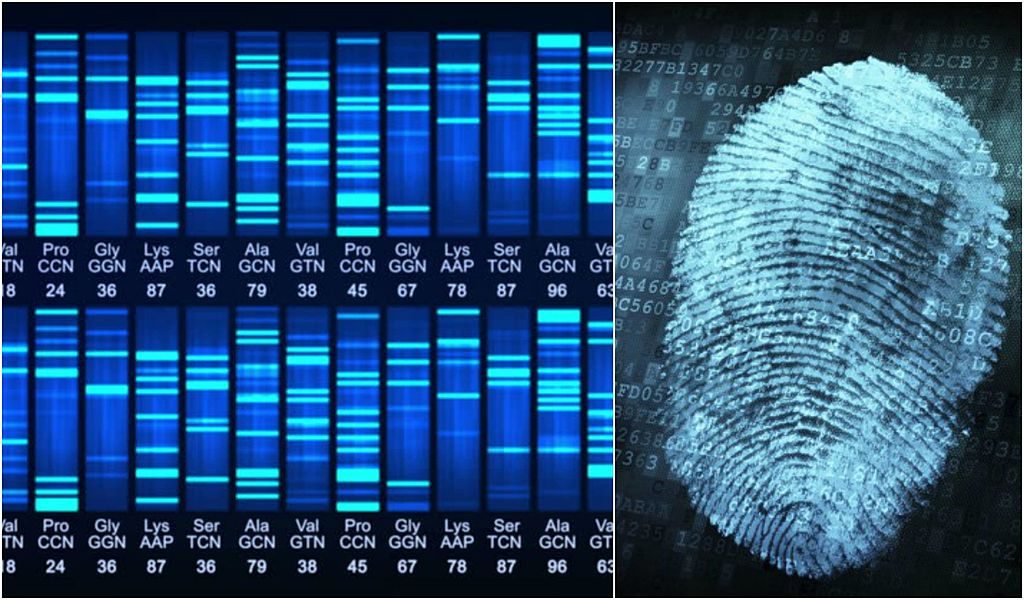 Have you ever heard about the Royal Park Murder Case back in 2005? It was a case that gained lot of media attention due to the brutality of the murder and lack of evidence but, finally justice was granted and the culprits were caught with the help of a silent witness: DNA fingerprint.

Yvonne and Caroline Johanson were two sisters living in USA and used to spend their holidays in Sri Lanka as their mother was a Sri Lankan. On such holidays they used to live in luxury apartments at Royal Park, Rajagiriya. The two sisters were very fond of each other just as they were on partying. So on June 30th, 2005 they left their apartment for a party, unaware that their lives were about to change forever. On the way they picked up Jayamaha: Caroline’s boyfriend from his home where he lived with his sister. They partied at several clubs where Jayamaha and Caroline got into an argument and Yvonne then intervened on Caroline’s behalf. Angered by this Jayamaha killed Yvonne when he went to drop the two sisters at Royal Park. Yvonne’s body was found next morning by a worker at the apartment.

In this case there was no clear evidence leading to the murderer except a bloody fingerprint on the railing of the staircase where the body was found. This fingerprint matched Jayamaha; but this was not enough to convict him. therefore, the sample of blood was then studied under DNA fingerprinting technique and it matched the victim. This led to conclude that Jayamaha was indeed Yvonne’s murderer and thus was given death sentence.

What is this DNA fingerprint? 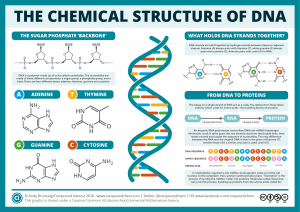 DNA or Deoxyribose nucleic acid is the blueprint of an organism. It contains all the details about an individual and is unique to each person. Using DNA as a fingerprint for identification of an individual is known as DNA fingerprinting.

When DNA of any individual is digested with a restriction enzyme, fragments of different patterns (sizes) will be produced as there will be difference in cleavage site position due to the differences in the nucleotide sequence. This is the basics of DNA fingerprinting. DNA Fingerprinting is used by scientists to distinguish between individuals of the same species using only samples of their DNA. 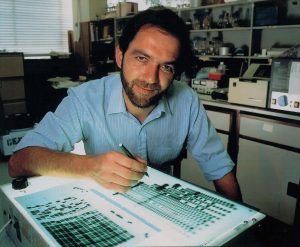 The process of DNA fingerprinting was invented by Sir Alec Jeffrey  at the University of Leicester in 1985. He was studying hereditary diseases in families and was focusing on methods to resolve paternity by using the genetic links between individuals. He used Restriction Fragment Length Polymorphism (RFLP) technique to analyze DNA and discovered that repetitive patterns of DNA, known as Variable Number of Tandem Repeats (VNTRs), were present in all human beings but that they varied in length in a unique pattern for each individual. He used this variation to establish the identity of a person and termed it as DNA fingerprinting.

DNA fingerprint technique was first used in forensic analysis when two murders were committed close to the University of Leicester in 1983. Collin Pitchfork was charged guilty for the murder of 15-year-old Lynda and Dawn Ashworth based on the DNA extracted from semen samples collected at the crime scene and saliva sample from the killer. 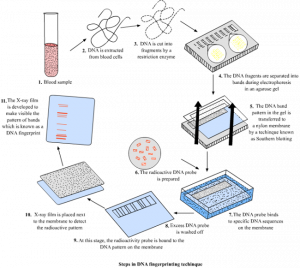 There are seven steps in DNA fingerprinting: first is extracting the DNA from cells. Almost all the cells in the body except red blood cells contain DNA. Therefore, any tissue from the body can be used to extract DNA. However, the only drawback here will be obtaining enough DNA for analysis. This can be overcome by using PCR (Polymerase chain reaction) technique to amplify the DNA extracted.

The second step would be cutting up the DNA using a restriction enzyme. A “restriction enzyme” cuts the DNA at specific sequences and yields fragments of different sizes. These sizes depend on the nucleotide sequence of the DNA and are unique to an individual.

The third step is separating the DNA fragments using gel electrophoresis. The gel is like a sieve, and therefore separates DNA according to the different sizes of the fragments. DNA is naturally negatively charged due to the phosphate groups in it. Therefore this would move towards the positive terminal if a potential difference is applied to the gel.  Small fragments move faster than larger fragments, so the DNA fragments will be separated as they move in the gel.

This separation yields a specific pattern based on the fragment sizes which is then transferred onto a paper. This is the fourth step in the technique. The gel-separated DNA fragments are converted to single stranded fragments by dipping the gel in weak acid; this is done in order to expose the nucleotides. These are then transferred to white nitrocellulose paper, so the paper now carries an exact replica of the DNA on the gel. This is called “Southern blotting”.

The fifth step is adding the radioactive probe. This “probe” determines which DNA fragments can be seen at the end of experiment. It is a small chunk of radioactive DNA of a particular sequence of letters. The probe sticks to the fragments of the DNA that has the matching sequence, but only those fragments that have the matching sequence of letters, no other fragments. In DNA fingerprinting the probe is a sequence of 33 letters that is found in the repeated STRs of the genome.

The final step is setting up the X-ray film. In a dark room, the nitrocellulose paper is placed against a piece of X-ray film. The X-ray film can record the pattern of radioactivity on the paper, therefore when the film is developed, it will have the pattern of bands which are the DNA fragments where the probe has stuck.

Any sample from the body such as skin, saliva, blood, semen can be used to extract DNA. Even though DNA might be partially degraded it can still be typed with the help of PCR. This leads to positive of identification of individuals and establishment of genetic links.

Other applications of DNA fingerprinting

Other than in criminal identification, this technique can be also used in paternity establishment and identification of mutilated bodies.