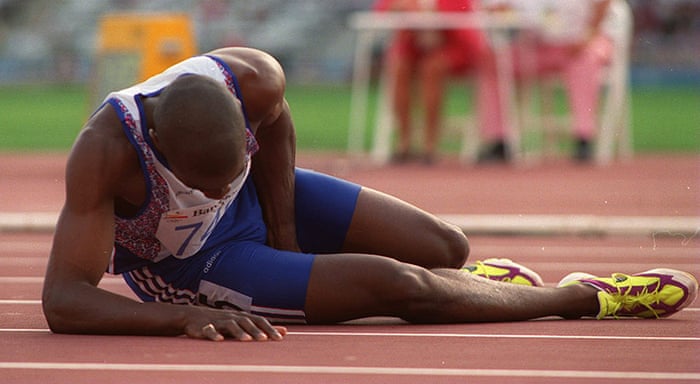 Derek Anthony Redmond is not a name that conjures up images of consecutive gold medals at the Olympics. Nor is it a name that will be remembered by hundreds of broken records. But much rather as a remembrance of true courage and one of the greatest moments in humanity throughout the history of sports. This particular mark in history dates back to the summer Olympics in Barcelona 1992. Where Derek Redmond eagerly approached the starting line of the 400 meters semifinals event with one goal. He had been denied the chance to participate in the 1988 Seoul Olympics minutes before the event due to an injury of his Achilles tendon. This time he was determined to prove to the world as well as himself that all the training he had gone under, every ounce of blood sweat, and tears he had shed only made him stronger. He came ready to deliver his best.

By the sound of the gun firing and the rest of reality sinking into distant noises, Derek sprinted forward. Mind in constant awareness of the strengthening and relaxing of muscles as his feet pounded on the track. The first quarter of the race seemed promising. But at approximately 250 m away from the finish line Derek’s whole body went cold from an unsettling “pop” noise followed by a rapid shock of pain shooting from his right thigh. He had snapped his hamstring mid-race. Derek fell to the floor grabbing his leg while burying his face in his palms as the world around him came cascading drastically.

Everything he had ever worked for, and every dream he ever had, seemed hopeless and lost. Watching the other competitors step across the finish line, he knew it was all over. He had lost the chance to qualify for the finals. Stretchers immediately ran to him trying to help him off the race track. But without sparing a second thought Derek Redmond stood back up and started limping towards the finish line raising the audience to their feet one by one. A visible battle of strength and pain written on his face as he desperately hobbled his way forward, not once stepping over the sidelines of lane number five. Halfway through, he was assisted on the Olympic race track by his father Jim Redmond who battled his way through security to the aid of his son. The weeping athlete leaning on his father’s shoulder was welcomed at the finish line with a standing ovation as the crowd broke into a roar of cheers.

The International Olympic Committee had seen this incident as a celebration of humanity and had stated;

Derek Redmond’s father had said that he ran to the track to prevent his son from doing any further damage to himself. But his son had been persistent in his decision to finish what he started.

Derek Redmond had his dreams taken from him in a matter of seconds. Everything he had worked for felt in vain. Years and years of anticipation and hard work fell inferior to his fate that day. But even in that moment of great despair, he grasped on to his last remaining strength and stood back up. He moved everyone with his actions and defined success as learning to get up once more than the number of times you’ve been knocked down. 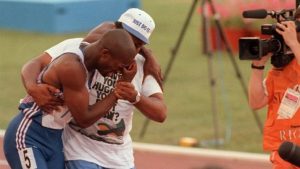 Derek Redmond showed the world that the spirit of sport is not in the heavy garland of flowers that weigh around your neck while bearing a shiny metal pendant on your chest, but rather the courage in that time of chaos, when you feel as if you’re drowning, your organs packing in, lungs slowly giving out, head buzzing from the weight of the water above and your eyes losing focus, you tighten your lips to fight the urge to let the water in, challenging your wavering strength as you take all that is left in you to push towards the surface, redefying the limits of endurance you had once known.

Hard work might fail to reward you in the exact way you hope. But having the courage, persistence, and the drive that pushes you forward to the finish line even when all hope is lost is what preserves the value and spirit of your journey.

“I finished last. But I finished.” – Derek Redmond