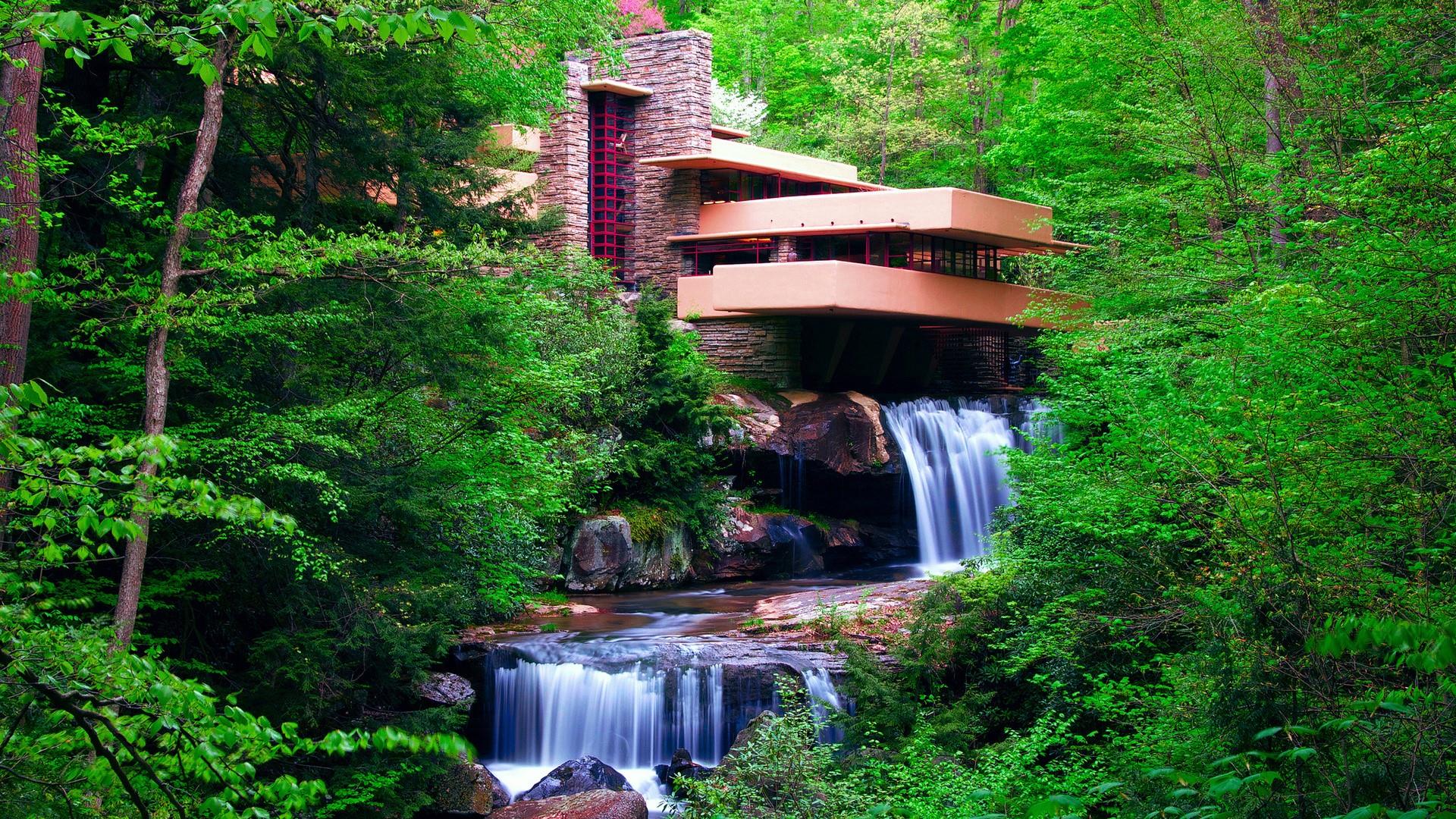 In the rural Southwestern Pennsylvania, USA, a unique masterpiece of architecture, called the Fallingwater is located over the Bear Run waterfall. This house was designed by the architect, Frank Lloyd Wright. Its construction began in 1936 and was completed in 1939.

What makes this particular building so significant in the history of architecture is, its year of construction, with respect to the typical style of architecture that prevailed during that time period. The typical style of architecture during the 1930s was the Traditionalism, which consisted of many huge concrete pillars, domes and other similar monolithic forms. In such an era, Wright came up with a masterwork of organic architecture called the Fallingwater which harmoniously blends with its surroundings and promotes the interaction of man and nature. Thus, Fallingwater is considered to be the best all time work of American architecture and unquestionably the most famous private residence ever built.

Fallingwater was designed as a weekend house for the family of Edgar J. Kaufmann, owners of Pittsburgh’s largest department store. The site of the house was the Kaufmann family’s mountain property at Bear Run, Pennsylvania, where they enjoyed weekend and summer vacations. The critical element in this setting is the waterfall over which the house is built. The family expected that the house would be built facing the waterfall. However Wright, who was intrigued by the landscape of Bear Run with the mature forests, massive sandstone boulders, a wild free flowing stream and a forest understory covered with native plants and wildflowers, suggested that the house rise over the falls rather than facing it. Wright was inspired by the Japanese architecture, as a result of which he created harmony between man and nature. Traditionalism, typical style of architecture in the 1930s

Fallingwater grows from the site’s rocky landscape. Its concrete terraces float above the falls drawing attention to the waters. Thus, the residents can feel and hear the presence of water amidst them, rather than seeing it. The surroundings of the Fallingwater change according to the four seasons, so that the residents can experience different seasons accordingly. The terraces and balconies of Fallingwater are projecting out horizontally without being supported by any columns. Although the terraces and balconies are hovering over the falls, they are anchored to the house’s central stone chimney.

Fallingwater consists of two parts as the main house of the client and the guest room. Client’s house consists of three floors, with a living room and a kitchen on the first floor, three small bedrooms on the second floor and the study and bedroom of the son of Edgar Kaufmann in the third floor. All the rooms experience the natural surroundings of the site. The living room has steps that directly lead to the water below. Wright wanted the residents to have a sense of compression when indoors and of expansion when approaching the outdoors. Hence, terraces occupy half of the building while interior spaces are small with low ceilings reaching up to 6’ 4’’ which creates a sense of a sheltered cave. After the death of Edgar J. Kaufmann, his son became the heir to this property. In 1963, he entrusted the building and the nearby land to the Western Pennsylvania Conservancy. In the following year, Fallingwater opened as a museum. The Conservancy maintains the building in proper conditions and about 150,000 visitors visit it annually. In 1966, Fallingwater was declared as a National Historic landmark and in 1991, it was named as the ‘’Best all time work of American architecture by the American Institute of Architects (AIA).

Many years have passed since the construction of the Fallingwater, but still no similar work of architecture has been constructed up to date. Thus, Fallingwater has no progeny, which makes it even more significant in the history of world architecture.