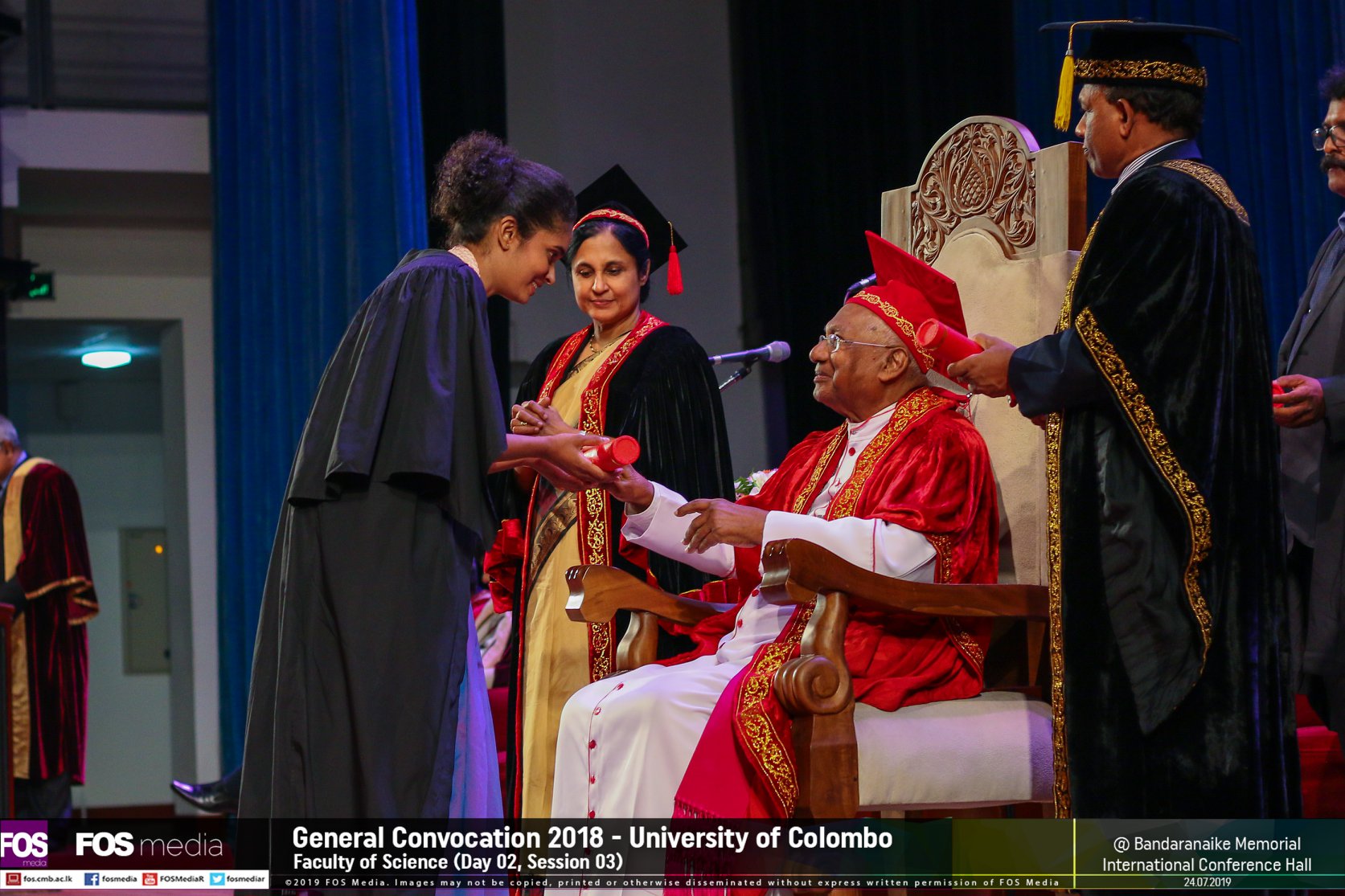 Today’s speaker, Ms. Warunika Nishamini Karunasiri, graduated from the Zoology and Environment Sciences Department with first-class honors in Immunology and Integrative Molecular Biology (IIMB). She was born on 07th July 1992 as the youngest daughter of a family of five members and is 29 years old now. Ms. Warunika completed her school education at Devi Balika Vidyalaya, Colombo 08. She entered the Faculty of Science, the University of Colombo for a degree in the stream of Biological Sciences. She was a member of the Field Ornithology Group of Sri Lanka (FOGSL). Ms. Warunika worked as a temporary demonstrator at the Department of Zoology and Environment Sciences, Faculty of Science, University of Colombo. Currently, she works as a temporary instructor at the Department of Environmental Technology, Faculty of Technology, University of Colombo.

Since January 2018 she has conducted her fourth-year research project on studying the “MSMEG_0596 gene” encoding GntR family transcriptional regulator in Mycobacterium smegmatis for drug targeting under the supervision of Professor Inoka C. Perera of the Department of Zoology and Environment Sciences, Faculty of Science, University of Colombo. The research was conducted in Prof. Inoka C. Perera’s “Synthetic Biology Laboratory”.

Antibiotic resistance is a global health crisis as the increasing incidence of infections caused by drug-resistant bacteria poses a significant and increasing threat to global human health, with predicted annual mortality of 10 million people by 2050. “It is imperative to advance new and appropriate antibiotics with efficacy against multidrug-resistant bacteria. As such tuberculosis is the leading cause of death by a single infectious disease worldwide”, says Ms. Warunika.

Her main goal of this research was to identify a potential novel drug target against the causative agent of tuberculosis; Mycobacterium tuberculosis. For that purpose, she used Mycobacterium smegmatis as a model organism. Transcription is a component in the central dogma of molecular biology and transcription factors (TFs) are regulatory proteins whose function is to activate (or more rarely, to inhibit) transcription of DNA by binding to a specific DNA sequence. Based on that, research was designed to achieve these goals,

Ms. Warunika proudly recalled how she conducted her research as well. According to her, M. smegmatis gave visualized colonies after four complete days of plating in the agar media. Genomic DNA was extracted from the colonies to separate the MSMEG_0596 gene and the predicted binding site DNA sequence of the TF protein which were then subsequently subjected to PCR amplification. MSMEG_0596 gene was cloned into competent E.coli Top10 strain. Finally, she managed to successfully yield the correct clone after several attempts of cloning, and it was confirmed by sequencing. The correct clone was transformed into competent E.coli BL21(DE3) cells and expressed the TF protein of interest. The expressed protein was purified by protein purification techniques and used in assays to analyze DNA and ligand binding properties.

Apart from that, homology modeling was conducted to develop a model structure for the MSMEG_0596 TF protein. Ligands were docked to the modeled protein in silico and probable binding pockets were successfully identified. Meantime growth curves were plotted to analyze the effects of different carbon sources for the growth of M. smegmatis by taking OD 600nm spectrophotometric absorbance values for 2 days at 2-hour consecutive time intervals. Ms. Warunika ended her fourth-year undergraduate research project in January 2019, spending a period of one year, as all great things take time. The research project was submitted as a dissertation and an abstract was published at the 39th annual conference of the Institute of Biology, Sri Lanka. She is planning to submit a paper in near future.

Based on her research, Ms. Warunika revealed that the MSMEG_0596 GntR family TF protein in M. smegmatis binds to the promoter region of the Glycolate oxidase gene which is involved in the Glycolate metabolism of M. smegmatis. She was also able to develop a structure for the protein. All these findings will shed light on finding a novel drug target against the M. tuberculosis infection.

Ms. Warunika expresses her sincere gratitude to the personalities who supported her in accomplishing her research. “I would like to express my very great appreciation to Professor Inoka C. Perera for his valuable and constructive suggestions and patient guidance during my research project. I am particularly grateful to my co-author Ms. Thanusha Abeywickrama because her advice and guidance have been invaluable for me to successfully carry out and finalize the project.” She also thanked Ms. Sujanthe Rasakulendran, Ms. Harshanie Pathirane for providing instructions and support on doing the research, and Ms. Asma Rahman for being a supportive lab partner. “My appreciation also goes to my family and beloved husband for their encouragement and endless support. My gratitude extends to the Department of Zoology and Environment Sciences, Faculty of Science, the University of Colombo for allowing me to conduct this research project providing all the facilities”.

Ms. Warunika gave a great insight to budding scientists in beginning our careers as a scientist. “If you are someone who is looking for a pathway to begin your carrier as a researcher/scientist, Molecular Microbiology and Microbial Genetics are excellent fields for you to get engaged with. Microbiology is not only about culturing microorganisms, but also a journey towards learning their genetics and proteomics. There are so many things yet to be discovered within those areas of biotechnology which you could use for the betterment of the world”.

As undergraduates and budding scientists, the fourth-year research project is not an easy task. It takes lots of hard work, patience, knowledge, skills, and guidance. Ms. Warunika did an amazing job with her research. We wish her all the best with her future endeavors and higher studies. Sometimes it may take a lot of time and effort to produce a successful result. You may fail again and again. But never give up on your target. Because to create a beautiful waterfall, the river should fall from a mountain. Don’t stop questioning and seeking new things. It helps you to become a great scientist. Stay tuned with Research Cradle to walk through another wonderful research journey. See you all in our next episode.