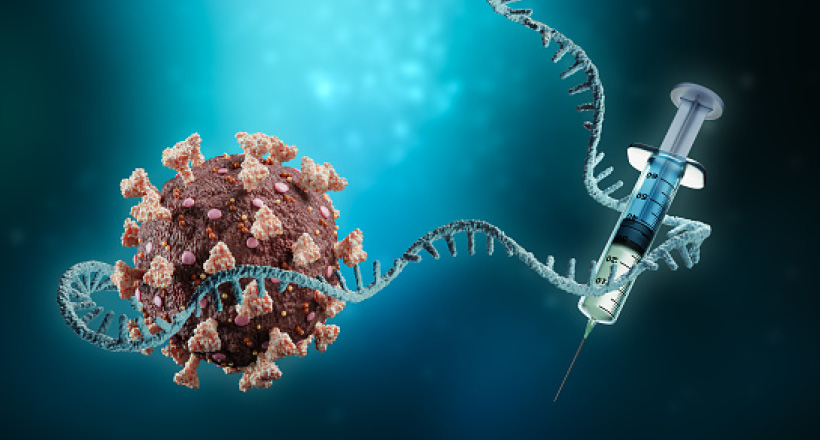 Three decades ago, at the University of Pennsylvania, USA, a scientist was carrying out experiments on RNA. This scientist was able to make mRNA molecules in Petri-dishes, but her trials with living mice failed. She and her colleague were able to discover that the synthesized mRNA caused an inflammatory reaction in the mice. It turned out that the immune system reacts to the invading pathogens by detecting their mRNA and causes inflammation. Why all the natural mRNA did not cause this problem in living cells? They did not know. Along with years of tedious work, they could finally discover a molecule called “pseudouridine” which facilitated RNA to evade the immune responses. Then, they could have never thought that one day, their discovery will save the world.

Today this discovery made by Dr. Katalin Kariko has become the redemption to the entire world as vaccines made by Pfizer-BioNTech and Moderna employs this very discovery for its battle against COVID-19.

RNA or Ribo Nucleic Acid is one of the 2 types of genetic materials in a cell, the other being DNA. There are many structural and physiological differences between DNA and RNA. Among different types of RNA within a cell, 3 types; transport RNA/tRNA, messenger RNA/mRNA, and Ribosomal RNA/rRNA involve in the process of synthesis of proteins coded by DNA. The proteins synthesized control almost all the biological processes in the body.

Researchers call RNA, mRNA in particular, as the recipe book for trillions of cells in the body. In theory, mRNA can be manipulated, synthesized, and injected into any cell in the body to make it an on-demand drug factory. When a properly processed and synthesized mRNA is injected into a cell, it can stimulate the cell to produce desired proteins, which can range from enzymes to antibodies within the cells, in large amounts.

Researchers have been trying to manipulate this property of RNA in producing pharmaceuticals and vaccines. Unfortunately, for years the experiments done regarding RNA have failed.

Katalin Kariko grew up in Hungary. She has always wanted to be a scientist, even though she hadn’t ever met one. Her young ambitious self, pursuing her dream, moved to the USA in her 20s. For years she didn’t find a permanent position as a scientist, but she never gave up. Dr. Kariko focused on mRNA-based research for her entire carrier. She was convinced mRNA could instruct cells to make their own medicines, including vaccines.

In 1989, she landed a job with Dr. Elliot Barnathan at the University of Pennsylvania. It was a low-level position and never meant to lead to a permanent tenured position. During their first experiments, they planned to instruct cells to make a protein called urokinase receptor. They set a radioactive isotope that will bind with the newly formed protein kinase for detection. When they finally conducted the experiment, their detector found new proteins produced by cells that were never supposed to make them. This unexpected result suggested that correct mRNA could direct any cell to make any protein at will. “I felt like a god” was how Dr. Kariko described this victorious moment of opening a new door of science to the world in her own words.

Following this unexpected discovery, they conducted many types of research in inducing living cells to make proteins. Alas, they all failed. Thankfully for her unwavering wits, even through years of failure, Dr. Kariko never gave up. After years of hard work and the support of her new colleague and partner in her research Dr. Weissman, she stumbled upon pseudouridine found in tRNA. She found that the same molecule is present in mRNA too. With this second groundbreaking discovery, Dr. Kariko, with Dr. Weissman showed pseudouridine added mRNA was not only unsusceptible to the immune system but also made the mRNA much more powerful, directing the synthesis of 10 times as much protein in each cell.

Dr. Weissman and Dr. Kariko then showed they could induce an animal, a monkey, to make a protein they had selected. They injected monkeys with mRNA that encodes for a protein called erythropoietin – a proteinaceous hormone that stimulates the bone marrow of the body to make red blood cells – and the animals’ red blood cell counts soared.

In the struggle of finding solutions for the COVID-19 pandemic, two biotech companies took notice of the work of Dr. Kariko. Moderna, in the United States, and BioNTech, in Germany. Pfizer partnered with BioNTech, and Moderna could produce two of the most successful vaccines for COVID-19 with the astounding science behind mRNA discovered thanks to Dr. Kariko.

RNA Vaccines to the Future

RNA-based vaccines were developing for years, backed by decades of research and data even though many were unaware of it. COVID-19, simply, nudged the scientists to speed things up. With the newly developed vaccines against the SARS-CoV-2 virus, which are said to be 95% successful, scientists are seeing new lights of hope against a variety of RNA-based viruses. Currently, RNA vaccines are being studied in clinical trials for HIV, herpes, the Zika virus, rabies, and influenza.

It is clear the world is walking towards a new era of human medicine and pharmacology thanks to the new knowledge and research on RNA. During these tough times, it’s our only hope that the vaccines for COVID-19 will be successful in the long run in eradicating the SARS-CoV-2 from the face of the Earth.