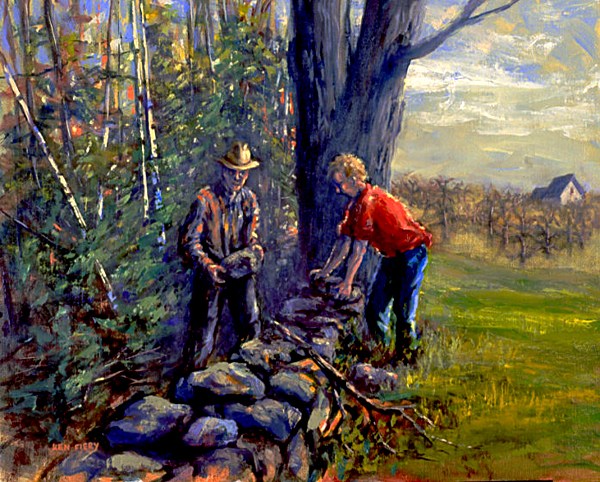 I had the fortune to witness this wonderful creation, “Mending Wall” by Robert Frost few years back. When I first read through the poem, I thought it was merely about repairing a broken wall or fences. However, I understood that a more valuable meaning can be extracted when read between lines.

In the first few lines, the speaker complains that the gaps in the wall are mainly created due to the activities of nature like swelling of the ground due to freezing of water. From the lines, “no one has seen them made or heard them made” and “something there is that doesn’t love a wall”, the poet tries to explain the uncertainty of the cause of damages to the wall. It is usual that when the doer is invisible, any kind of result occurred is attributed to the nature. Here, poet shows how the nature disapproves the boundaries created by humans.

In the next few lines, the speaker talks of what he and his neighbor are doing when the gaps are created. The phrase, “spring mending-time” depicts that annually these damages happen and they are repaired. With the line, “I let my neighbor know beyond the hill”, the reader gets an idea of how far these two neighborhoods are located. This gives rise to a question whether a wall is needed between these two lands. 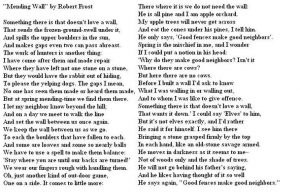 As per thought, the speaker also believes that repairing the wall is such a joke. He criticizes it by comparing it to an “outdoor game”. The speaker not only criticizes it, but also gives justifications to prove that a wall is not required. He says this as, “he is all pine and I am apple orchard. My apple trees will never get across and eat the cones under his pines…”. The speaker insults the old-fashioned neighbor as well, by making humor out of the way he is constructing the wall. It can be seen in lines, “bringing a stone grasped firmly by the top, In each hand, like an old-stone savage armed...”. However, the matured neighbor gives the conclusion by rejecting all the justifications given by the speaker. He says, “Good fences make good neighbors”, which can be considered as the core of this poem.

Actually, what does this conclusion mean? Is it merely about having a wall between two houses? I believe it is more than that. Robert Frost has attempted to give a deep message to the society about the importance of having strong and clear boundaries, through this poem. This conclusion in deep, tells the reader that, to have healthy bonds and relationships, knowing your limits is of prime importance. Today, one of the major causes for the conflicts we observe in our society is the lack of awareness among people on the limits and boundaries they should maintain in order to have a peaceful lifestyle.

Maintaining limits and boundaries brings you lot of benefits. When you set your limit, you let other people know your likes and dislikes which prevents any conflicts afterwards. Also, by showing the society that you work within your limits, a trust is built up on you which is quite advantageous in every occasion. Specially, knowing your boundaries helps to maintain a healthy marriage life because your partner may have the above mentioned “trust” on you. Nowadays, lot of love affairs and marriages are broken due to the lack of trust which arises from skipping the boundaries.

Other than this, Frost has given some contrasting ideas for the critical thought of the reader which enrich the meaning of this poem. According to the poem, both the speaker and the neighbor at least meet once year for the repairing of wall which enables them to communicate during this period. This shows that nature purposely breaks down the “walls” made by humans in order to unite them. Ironically humans are unable to respect the nature’s rule, that they have to “mend” the broken “walls” to have a better life style. Frost tries to show this conflict between nature and humans which emerged as a result of civilization of human species.

As is widely known, the difference between stupidity and the genius is that genius has its limits. Therefore, if you are willing to walk towards the light by avoiding the darkness called stupidity, remember to remain within your fences because “Good fences make good neighbors”.