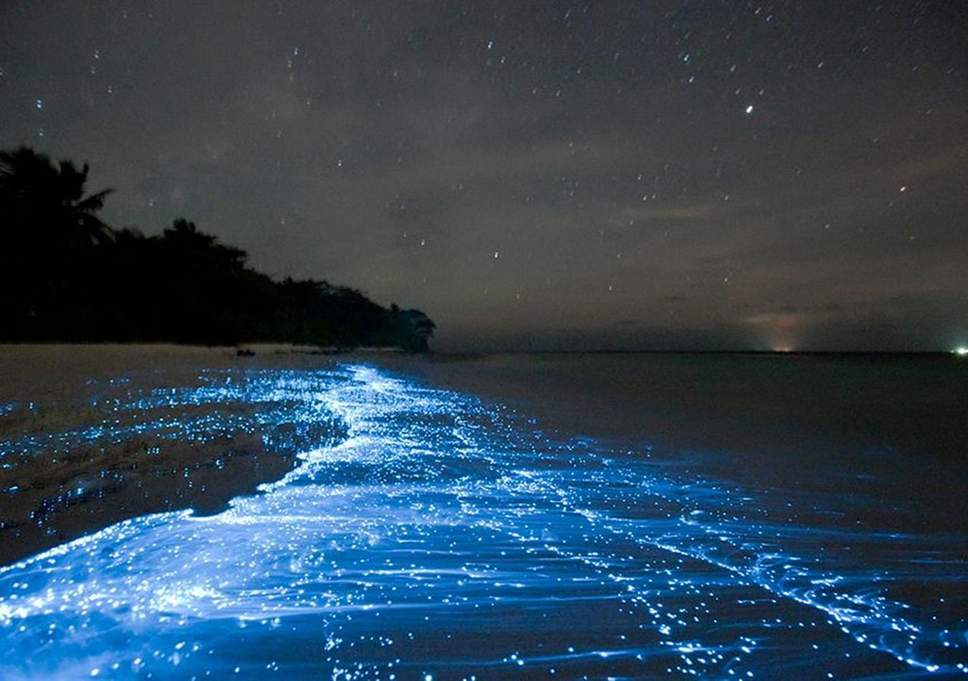 While studying for a series of stressful exams in the university, one morning I just logged into facebook and saw a post on something amazing. In a moment, I browsed the internet and searched for what it is. I was really impressed by seeing very nice photographs and I searched further.

Sea of stars is located not in the sky; but in an inhabited island called “ Vaadho” of Raa atoll, Maldives!

These amazing glowing blue waves are a wonder of nature which attract many tourists to this tiny island near the equator. As the waves crash on the beach, the water glows in the dark. This has given a more romantic night time but not a day time. The reason behind this virtual heaven is bioluminescence. That is, a natural chemical reaction which produces and emits light, done by an organism. Phytoplankton known as “dinoflagellates” are the responsible photosynthetic, marine microorganisms for this phenomenon. When sea water is disturbed by O2, they unintentionally become angels on earth.

“Scintillons” are the flashing units within the cytoplasm of dinoflagellates. Among all bioluminescent organisms, they only possess this specific structure. Luciferin – the light emitting molecule which is a chlorophyll derived tetrapyrrole ring, acts as the substrate for the light producing reactions. The enzyme luciferase, catalyzes the oxidation of luciferin. These are two significant features involved in this phenomenon. Due to stimulation, usually by mechanical disturbances, by boats, swimming or sea waves, electrical impulses are sent around a proton-filled compartment in dinoflagellates. Then, the electrical impulses open up the voltage sensitive ion channels to scintillons. Luciferase is mixed with O2. As the reaction is pH sensitive; that is, when the pH of sea water drops, luciferase enzyme changes its shape, allowing luciferin to bind to it, starting a new series of chemical reactions.

Bioluminescence is controlled by the circadian clock, which is why it only occurs at night. The number of scintillons is higher during the night than during the day. A scintillon breaks down at the end of the night while recharging the chemicals to flash again the following night. 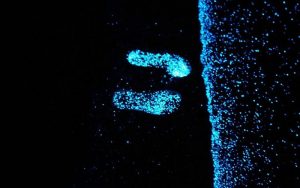 Bioluminescence acts as a defense mechanism, not only for dinoflagellates but also for some fish, jellyfish, mollusks, crustaceans and some varieties of bacteria and fungi, as well as terrestrial animals such as insects. Acting as a burglar alarm to attract and instigate secondary predators, it threats secondary predator to catch the primary predator, allowing the prey a greater opportunity to escape. Other uses of this phenomenon are counter-illumination camouflage, mimicry of other animals and attraction of mates.

Last but not least, by chance if you travel to Maldives, hope you will definitely visit and enjoy this wonderful heaven on planet earth with the sparkling stars.