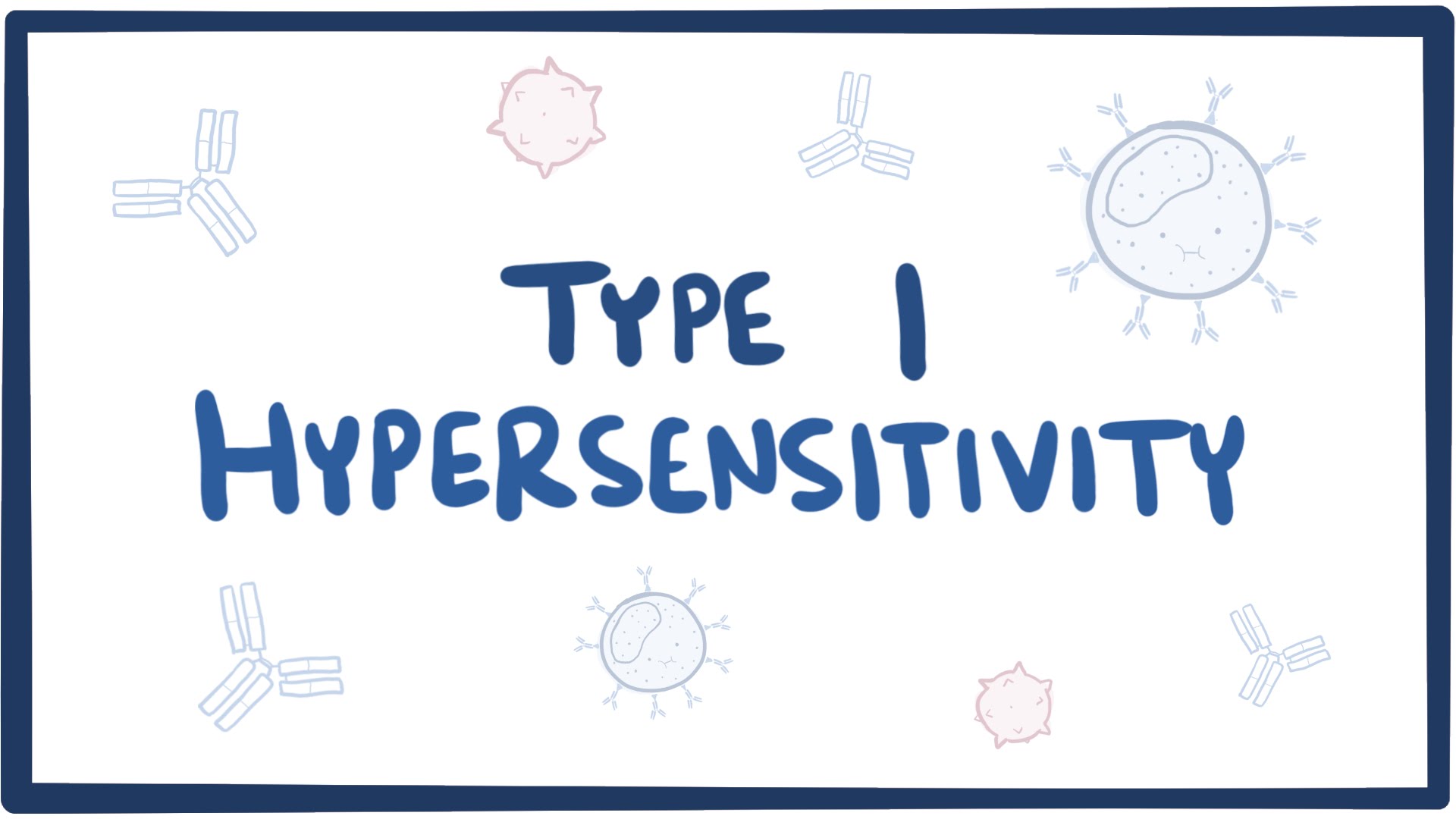 Hypersensitivity is the state of impaired immunity in which our immune system has overreacted to something in a way that damages it rather than protecting it. There are 4 types of hypersensitivity; Type I, Type II, Type III, and Type IV.

Type I hypersensitivity or IgE-mediated Hypersensitivity is the hypersensitive reaction due to the exaggerated action of immunoglobulin type E. The response itself is super-fast and the effects are immediate. This is the cause of many atopic diseases including but not limited to; asthma, rhinitis, conjunctivitis, and dermatitis as well as allergic diseases such as anaphylaxis, urticaria, angioedema, food, and drug allergies, which are immune responses to foreign allergens.

As mentioned above, IgE mediates most allergies. Thus are Hypersensitivity Type I reactions. The word “Allergy” derives from the Greek words; ‘Allos’ which means ‘Other’ and ‘Ergon’ which means ‘Reactivity’. Essentially, an allergy is when your body reacts to something that’s normally harmless like pollen, dust, or animal fur. They could be breathed in like pollens or contacted with skin as in the case of soap or lotions. The symptoms usually can be mild, but for some people, they can be very serious and deadly as well.

An allergic reaction occurs in 2 steps; Initial Exposure or Sensitization and Subsequent Exposure. In step 1, your body gets exposed to the allergen for the first time and the immune system identifies it as a threat and mounts an immune response. This ends up creating antibodies specific to that allergen. Step 2 involves when the body encounters that particular allergen for the second time where the body launches a vigorous response using the antibodies that were produced earlier.

People who are susceptible to these allergic reactions, usually have a genetic predisposition to over-reacting to unknown and rather common molecules. This means that they contain certain genes in their genome, which drive their T helper cells, which are more sensitive to allergens. Therefore, allergies tend to run in families.

To understand this concept better, let’s take a common example. Think of a person walking along a forest trail, and inhaling some ragweed pollen. Unfortunately, this person has T helper cells which are highly sensitive to a certain molecule of the pollen and binds specifically to them, thereby making the molecule, or rather the pollen antigen, an allergen.

Pollen antigens are captured by the Antigen Presenting Cells (APC) such as Dendritic Cells in the nasal mucosal membrane and delivered to the T helper cells at lymph nodes. This process happens even if the person is not allergic. However, if he is, then in addition to the pollen antigen, APC carries the co-stimulatory molecules. These co-stimulatory molecules work to mount an immune response.

Naïve T helper cells have an inbuilt capacity to recognize the pollen antigen but haven’t seen one yet, present at the lymph nodes. Once they are presented with the pollen antigen and co-stimulatory molecules by APC, they bind both and become Primed T helper cells. Priming changes the naïve T helper cell into a Type 2 T helper cell or Th2 cell. Various chemical stimulants called cytokines, such as interleukins; IL-4, 5, 10, etc. present in the surrounding aids this process. The primed and excited Th2 cell secretes its own IL-4 and stimulates B cells to undergo a procedure called antibody class-switching. As a result, B cells start producing IgE antibodies that are specific to the said ragweed pollens.

In addition, Th2 cells secrete IL-5 which in turn stimulates Eosinophils, a type granulocyte of White Blood Cells (WBC) to undergo degranulation and secrete various toxins and hydrolytic enzymes. These enzymes damage not only pathogen cells but also the surrounding host cells.

IgE antibodies have a high affinity for a receptor type called Fcε present in Mast cells which is another type of granulocytes. Hence, they bind to the mast cells and ready them for mounting the immune response. This completes the ‘sensitization’ phase.

If the said person breathes ragweed pollen again, maybe after a few months, this second exposure leads the geared-up mast cells covered in IgE antibodies specific to ragweed pollen, to bind the pollen antigen. Then mast cells release different pro-inflammatory molecules known as ‘mediators’ which are the culprits responsible for the symptoms seen in allergy reactions. One such mediator is ‘Histamine’. Histamine binds to smooth muscle cells in the airway and contracts them. Thus airway gets smaller and causes breathing difficulty. It also increases blood vessel permeability and blood flow, resulting in the leaking of tissue fluid. This result in swelling and edema along with urticaria or hives.

This whole procedure takes about several minutes giving the name ‘early phase reactions’. In contrast, there are ‘late phase reactions’ which take about 8-12 hours to happen after exposure. There are many more immune cells such as Eosinophils and Basophils, yet another type of granulocyte is summoned to the site of the allergen. These cells keep on building the immune reaction.

In general, people experience mild symptoms of allergies. These include hives, eczema, allergic rhinitis, and asthma. However, for some, once exposed to a large dose of allergens, these can be severe and potentially life-threatening. In that case, due to obstructing the airway, the body lacks sufficient oxygen supply to vital organs like the brain. This leads to a condition called ‘anaphylactic shock’.

Treatments such as Antihistamines to block the action of histamine, Corticosteroids which reduce the effect of pro-inflammatory molecules, and Epinephrine which constricts blood vessels and prevent anaphylactic shock are used for Type I hypersensitivity. However, there’s no cure for these allergies.