The never-ending thirst of archaeological researchers on investigating about the rapid expansion of archaic human across the earth, revolutionizes the history of Homo sapiens, in each and every moment. The early human was successful in building up civilizations that were characterized by unique social, technological, and cultural behaviors.

This is a victorious moment for us as Sri Lankans, as our land has set a remarkable benchmark in the evolution of mankind. A Southwestern Sri Lankan site, ‘Fa-Hien Lena’ is recognized to be the earliest site with bow-and-arrow technology, outside Africa with the finding of a collection of bow-and-arrow hunting tool-kits. This repertoire displays the developed social and technological behavioral patterns of mankind, 48000 years ago. 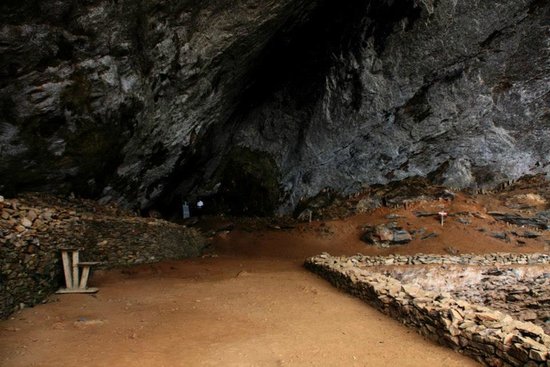 ‘Fa-Hien Lena’ is a predominant site used for the excavation of the buried past of Homo Sapiens. The ongoing studies of the site have found that it composes the earliest microlith assemblage and this demonstrates that they were used for hunting of prime-aged semi-arboreal and arboreal monkeys and squirrels. This was further confirmed with the animal remains found at the site. Moreover, according to the diligent researchers who have done a massive analysis of their findings, the toolkit of bone and tooth tools indicates the manufacture of plant- and/or hide-based items that may represent some of the earliest clothing or nets in a tropical setting. They came up with bony hunting technologies, plant-and/or skin-working technologies, and synthetic and social technologies found at the site after this comprehensive study.

130 of the artifacts made on terrestrial bone are found to be consistent in size, morphology, weight, and use-wear with having served as projectile points of three categories; unipoints,bipoints, and geometrics. These pointed bone technologies set evidence for arboreal mammal hunting. 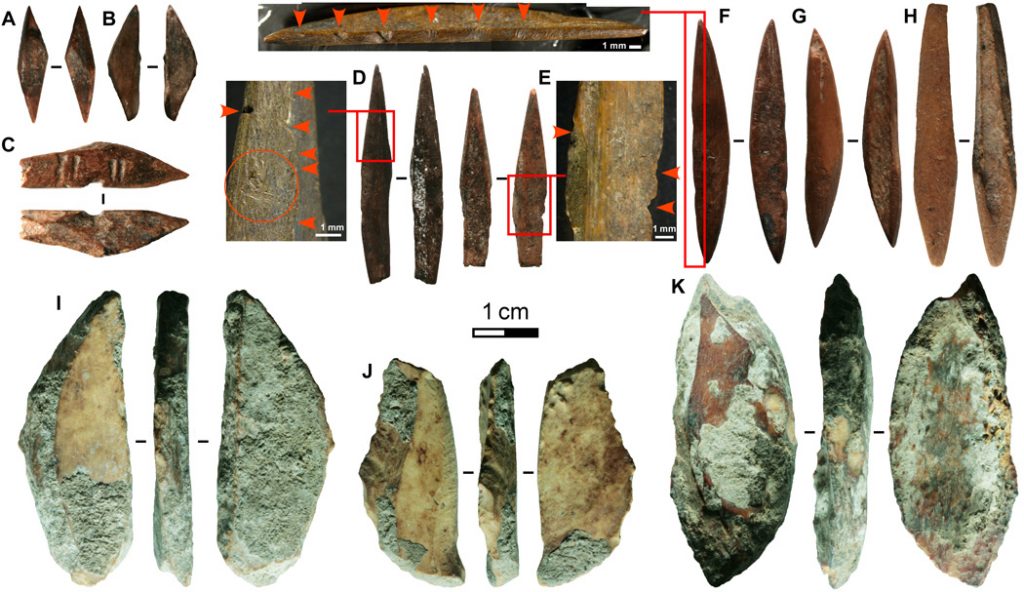 The findings display that the 29 bone implements other than bony tools show morphology and wear consistent with use as awls, pegs, wedges, and lissoir tools associated with the working of skins and/or plant fibers. The evidence suggests that clothing development may represent another technology, in which clothing was used as a layer of protection from insect-borne diseases. The size, shape, and use-wear of the piece suggests the construction of nets with even spacing of the notches down each side of the piece and are useful in catching both arboreal and aquatic resources. 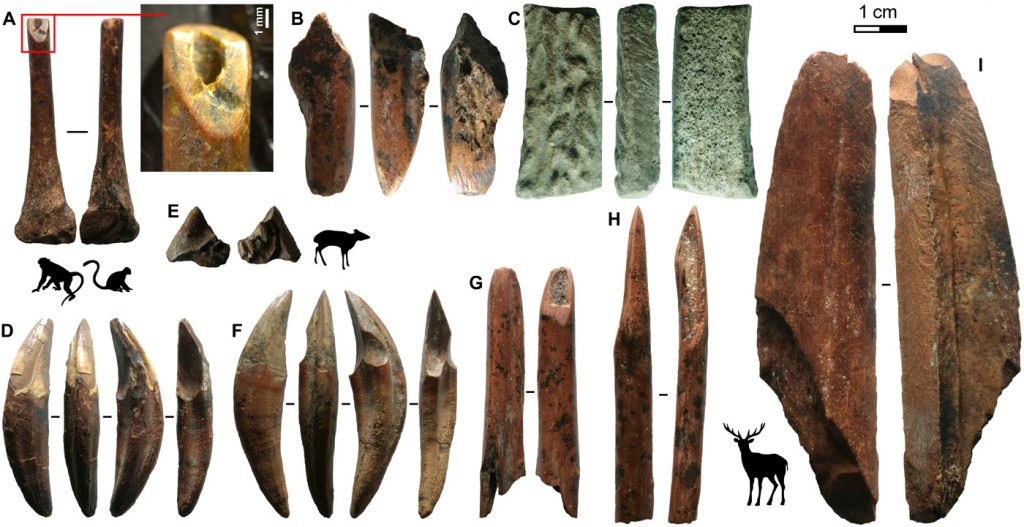 Three marine shell beads; two made from the apex of Conus spp. and one from a mud snail (Nassariidae), each displaying a single perforation and extensive wear from use provide evidence for symbolic or social behaviors of Archaic Humans. This indicates that either the people who used ‘Fa-Hien Lena’ visited the coast to collect those materials or had connections with other people living on the coast. The developed social skills and characterized living patterns of early human beings are symbolized by such findings. 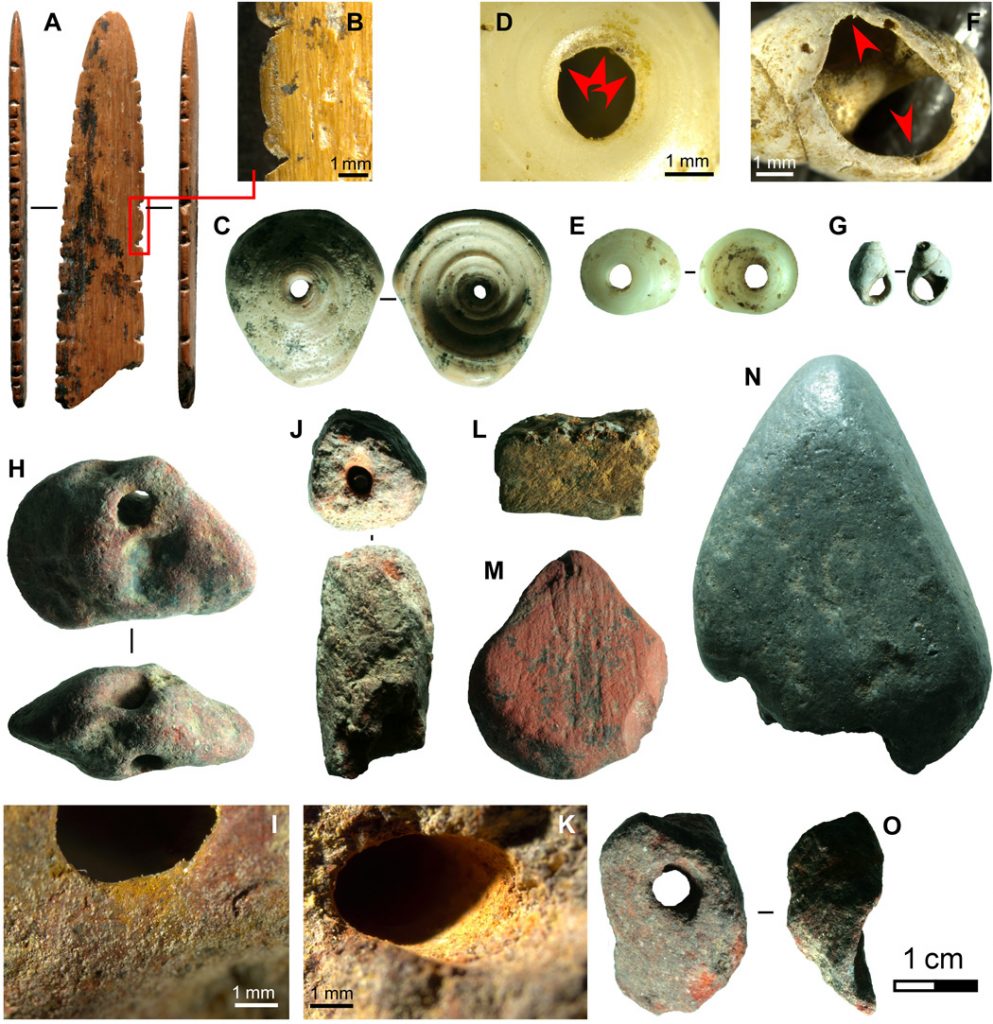 This summary from the findings is an indication of the sophisticated manufacture and use of hunting technologies, bony, or made by working of skins and/or plant fiber. In addition, this has led to the understanding of behavioral characteristics, adaptive capacities, cultural basis, and the degree of colonization in the living environment of our ancestors.

This excellent finding resulted from the limitless, outstanding commitment of the team of researchers, is indeed a turning point of the evolutionary history of mankind and will serve as a key factor to demarcate the fact that Sri Lanka is one of the most important archaeological sites in the world providing exemplary examples for the human evolution.