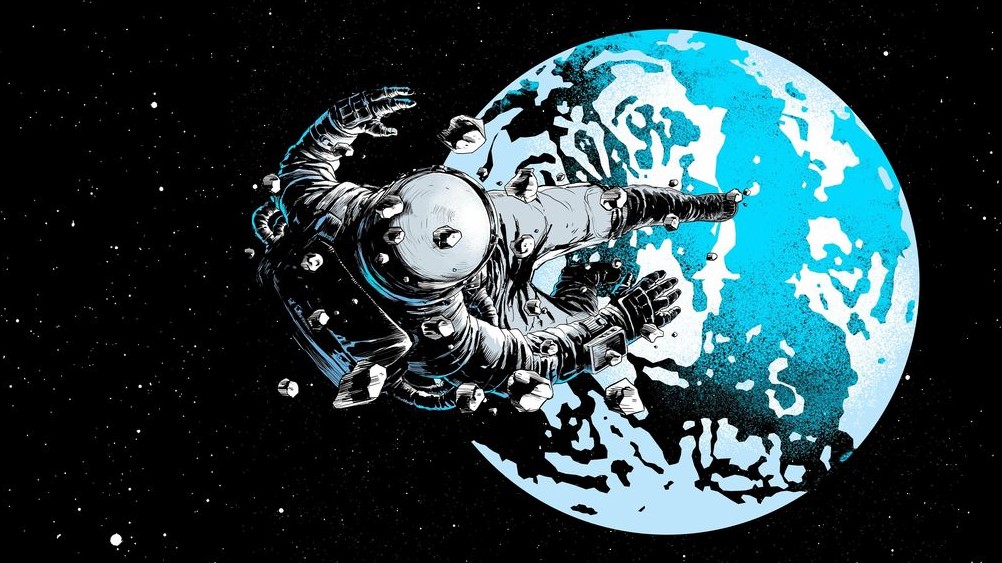 Sitting down in a corner, maybe you would be listening to music and mulling over some thoughts. Maybe, you would let yourself float off, limbs not flailing but rather, listless as if in a vacuum. Picture yourself in the backdrop of a billion distant stars, and the shadow of a planet looming backward with time. Sometimes, music does that to a person; it lets you swim in the seemingly infinite frame of space and time. Be it the nostalgic lull of the tune, or an introspective bunch of lyrics, some songs are starry. Or maybe, this is just “Another Space Song”…

In the fading shadow of the early 1990’s radio revolution, Grunge, new genres started blooming from it. Elements of Grunge, more amplified but after the era of the height of bands such as Nirvana, Alice in Chains, Pearl Jam, and Soundgarden, soon became labeled as the Post-Grunge movement. This is also what the California-based Alternative Metal band Failure came to be with their 1996 release “Fantastic Planet”. With then bandmembers Ken Andrews on vocals, guitar and bass, Greg Edwards on guitar, keyboards and bass, and Kelli Scott on drums taking to producing this album by themselves, a shift in process was not a surprise. This shift not only paved the way to a phenomenal album but also to leave an unforgettable mark on Space Rock as well.

With the undeniable influence in the rush and grit of punk rock underneath the tracks on this album, mixed in with the combination of a Cobain-ish rasp and a Cantrell-ish harmony vocal delivery by Ken Andrews, “Fantastic Planet” harbored some rather fulfilling tracks such as “Pillowhead”, “Solaris”, “Another Space Song”, “Stuck On You” and “Daylight”. With the music being built up on bass lines and massive-sounding drums, the guitars played a complementary role here; but a role that is satisfied to the utmost best. One of the best examples for this is Ken Andrews’ outro guitar solo on the final track, “Daylight”. Another great example is Greg Edwards’ marvelous crafting of the guitar riffs on the nostalgia-laden song, “Another Space Song”.

Another Space Song, or is it?

Somewhere in the mix of dreams and reality were a couple of strands of space-time, where a story was once written in the starry night sky. Gravity pulling and pushing them, emotional density grew in ebbs and flows throughout them. At some point in this reference frame, gravity gave way and these two strings started to coalesce. Within this growing ball of string, emotional density kept growing exponentially. But, as is the fate of the celestial bodies in this universe, entropy must be conserved, and with that, the core of these intertwined strings started to give way. And as emotions kept growing, this dying star exploded into a burst of color and light, a supernova. However, whether this supernova would survive the test of time to be a pulsar, or rather will it sink into a black hole was always in question…

Let’s switch reference frames for a while and take a look at this from the outside view. This is where you hear “Another Space Song” starting to play in the background; imagine yourself as an astronaut in a capsule that’s almost at escape velocity. But this isn’t a regular mission; it’s the first moments of a failed attempt at launch. You hear your pounding heartbeat through Scott’s opening drum pattern, the toms accentuating your anxiety. And as the shrill tremolo reaches a higher pitch with the counting seconds, suddenly you feel weightlessness as Andrews’ bass pulls in, signaling your breach from the atmosphere.

As Edwards’ reverb-filled opening guitar riff rings out in your ears, you take in the sight of the Earth, drifting away by the second. As you realize what this means, the first chills of loneliness hit you. Launch command losing contact with you, you understand that there is no way back to the ground and that floating in the infinite cosmos is what you are destined to do now. And as the glare of the sun, the rational constant of life, reflects off of the solar panels on the shuttle, you can let out a breath and maybe reflect on the situation itself.

“Maybe, there’s no harm in being lonely”, you whisper to yourself. You feel like all that you’ve been working hard for, your goals and dreams, just seem to float away.

“Maybe, I never really trained that hard for them anyways,” you shrug, but at the same time, if you keep looking, you’d see that there’s always thoughts of amazement right beside you.

Disconnected, you know that there’s no governance to your loneliness, and there’s no one that really understands your plight the way you do. Maybe you should just let the memories all eclipse over with time, and let your emotions go to sleep. But maybe, you’d feel nostalgic a tug of hope too; that you’ll always keep a fragment of those memories with you so that even if someone else finds your starry soul, there’ll be a part of someone else constantly within you.

Another Space Song to Float To

As Edwards’ pleading-like overdriven tone lays out a breathy riff, Andrews’ voice strengthens this yearning for a connection, “my soul is celestial bound...” And with that, the foundation to it all, a chorus where the guitars, drums, and bass all act as individual components; coming together to exemplify the quote “The whole is greater than the sum of the parts”.  As “Another Space Song” drips down into the outro, bring the two reference frames together.

Emotionally adapting and vulnerable beings that we are, dying stars are always there in our skies. And when these stars explode into the brilliant displays of energy of supernovae, they either become the birthing of many new stars (nebulae), or a rollercoaster of ebbs and flows (pulsars), or sinkholes in space-time (black holes). In the case that they do become a black hole, you could bring the objective view of a lonely astronaut gazing at the starry skies to attention. Maybe, you will float away, looking at the remnants of that dying star, and find yourself. Or maybe, you will hold those memories more dearly, and think in hindsight.

Either way, beginnings have endings. But it is not to be forgotten that endings lead to beginnings as well. “Patient time will carry me on without a sigh” is the much said, but accurately said antidote for all. And with that, the lyrical and melodic genius of Failure’s “Another Space Song”, fades out; as something more than just another space song…