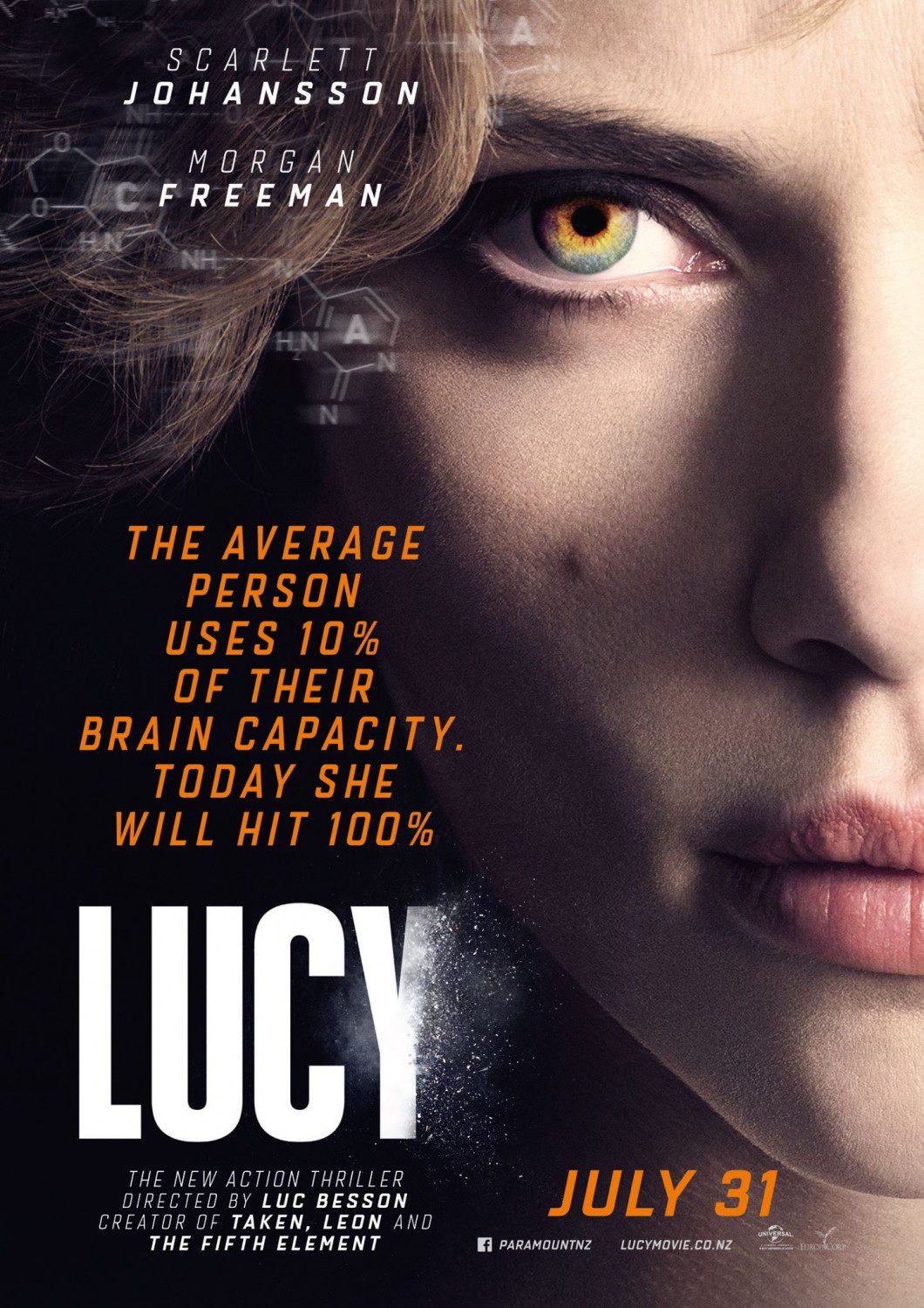 Lucy is a movie released in July 2014 based on a science fiction screen played & directed by Luc Besson & produced by Virginie Silla. The film is starring by Scarlett Johansson as Lucy, Morgan Freeman as Professor Norman, Choi Min-sik as Mr. Jang or the drug lord, Amr Waked as Pierre Del Rio, police officer. It’s a box office successed movie reaching  $443 million against a budget of $40 million.

Lucy is a young American lady living in Taiwan. She is forced to deliver a briefcase to Mr.Jang, a big drug dealer, by her new boyfriend. But he was instantly killed by the drug leader’s henchmen & Lucy was trapped by them. They needed to know what’s inside the briefcase & after confirming it had packets of synthetic chemical drug CPh4 they were satisfied. Then they forcibly deposit the CPH4 packets in the abdomen of 4 people including Lucy to deliver them to different places around the world. But she was trounced by  another man under their captivity & due to a kick at her abdomen the CPH4 bag breaks releasing the chemical heavily within her body. There she gets highly advanced mental & physical abilities & she departs from normal human feelings as its consequence. “Learning’s always a painful process. Like when you’re little and your bones are growing and you ache all over. Do you believe I can remember the sound of my own bones growing? Like this grinding under the skin. Everything’s different now. Like sounds are music that I can understand, like fluids. It’s funny, I used to be so concerned with who I was and what I wanted to be, and now that I have access to the furthest reaches of my brain, I see things clearly and realize that what makes us “us” — it’s primitive. They’re all obstacles.”

She seeks the help of a famous scientist and doctor, Professor Samuel Norman who had done massive number of researches on human brain, to save her life. She also needed the help of the Captain Pierre Del Rio to capture the other 3 people carrying the CPH4 drug packets. However at the end when the professor Norman points out that the main point of life is to pass on knowledge she decides to share every bit of knowledge she acquired by achieving 100% cerebral capacity. The film continues moment by moment interestingly.

Lucy’s first & best utterance in the movie is,
“Life was given to us a billion years ago. What have we done with it?”
The screenwriter tries to bring about the answers to this question through out the movie. It’s a question worth answering even for the spectators.Give a one second attention to answer it, have we really tried to use the life we have gained ,to its maximum?

The film is based on number of science facts. It states in the film that humans use only 10% of their brains. This leads to lots of controversies making people interested in this subject area fully excited. But at the moment there are no scientific evidence to support this idea. It still remains as a myth which is believed to arose by a misquote of Albert Einstein or the misinterpretation of the work of Pierre Flourens in the 1800s. It may have been William James who wrote in 1908: “We are making use of only a small part of our possible mental and physical resources” (from The Energies of Men, p. 12). However this myth begins to continue with the misuse by media, proving “Bad news has wings”.

It also talks about ‘Lucy’, a female Australopithecus afarensis who lived between about 3.8 and 3.0 million years ago in eastern Africa. The scientists were able to find 40% of the skeleton of “Lucy”  in 1974 & they attempted to understand what kind of a life style they had. They also attempted to correlate “Lucy” with present human beings. “Lucy” bear much more similar characteristics of ape ,like her diet, growth & development etc. while being similar to human in aspects of bipedalism. Even the brain size was ape like. In this movie why the director had focused about “Lucy” is to predicate the functioning of brain.  The Director is wondered by the fact  that Lucy’s brain size is only about 400g & modern human brain weighs about 1.4kg. He states

“I was very interested with all the science. When I learned one cell can send 1000 messages per cell per second and we have 100 billion cells in our body, for me, it’s gigantic.”

The film comes up with a question “What happens if humans can use 100% of the brain?” There they try to show Lucy is reaching 100% usage of her brain with the entry of CPH4 in to her body. At this point she can control even other living beings, matter & even time.

“Time is the only true unit of measure, it gives proof to the existence of matter, without time, we don’t exist.”

The film talks about a synthetic chemical CPH4 which is the blue crystalline drug as depicted  the film, which is also subjected to many controversies. So again a problem arises within the spectators.
Does this chemical really exist?? If that’s really exists what kind of consequences can arise??

In the sense it’s a imaginary compound. But there exists  an enzyme named 6-carboxytetrahydropterin synthase or CPH4 synthase that acts as a catalyst in the particular reaction,
7,8-dihydroneopterin 3′-triphosphate + H2O  =  6-carboxy-5,6,7,8-tetrahydropterin + acetaldehyde + triphosphate

But this chemical does not bring about results as shown in the film. It does not affect neuronal development by no means.

The film is actually a mixture of science & fiction. There are whole lot of good & bad speculative reviews for the movie because of the number of physics, chemistry, medical, evolutionary concepts the film is based on. However despite of the critical reviews on it,  it tries to implant a worth while conception in spectators. That is to comprehend the rightful way that humankind should headed to. Eventually that would be comprised of many goodly effects to mankind including its further existence.