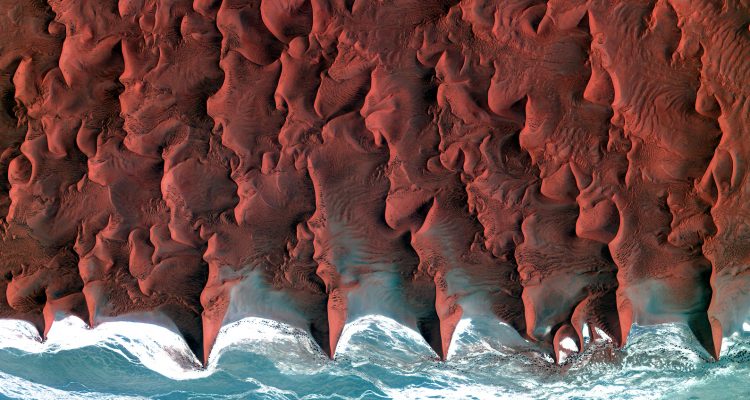 Though the above image carries resemblance to the surface of the moon, colored with pink and orange, surprisingly it is an image captured on Earth. It’s a coastal desert in Nambia , South Africa and Angola , stretching more than 2000km along the Atlantic Ocean with an empty beach, while covering an area of 81,000km2. Having an annual precipitation of 2mm- 200mm tells that Namib is a true desert in Southern Africa. It is assumed to be one of the oldest deserts in the world. It has endured arid and semi-arid zones for more than 60 billion years. Further, it is second only to the Atacama desert by age and aridity.

Creating the second highest sand dune in the world , Namib has become a UNESCO world heritage site. Temperature varies from 90C to 200C. It is stable in coastal areas ; rarely a rainfall comes from Naukluft mountains to the East. In the island the temperature varies and sometimes exceed 450C , Nights can be freezing.

This may not be a home to humans but it provides shelter for many endemic species than any other desert in the world. Although, Namib imposes a barrier for vegetation, some lichens and succulents are found in coastal areas. Welwitschia – A gymnosperm plant – considered as a living fossil, is found only here.

Skeleton coast is experienced with more than a thousand shipwrecks. Hence, most of the ships lost their way due to the fog and finally were destroyed. The sand dune and the sea in Namib have attracted many geologists but still poorly explained due to it’s high complexity.