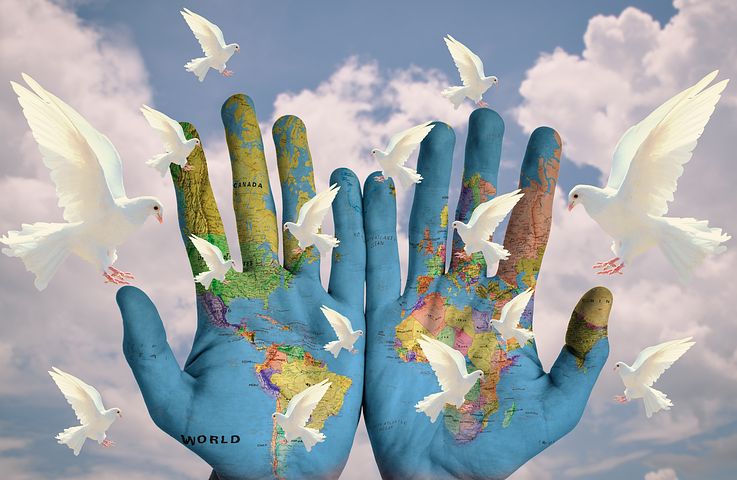 At the end of the day, what we all need is peace. Yes, peace of mind, peace at home, peace with relationships, peace at work, and the list goes on. And being humans, being a part of the society we live in, all of us deserve to live in a peaceful society.

Simply, peaceful society is where an individual can live freely without fear and hatred where human rights are not violated. There’s no violence or aggressive behaviors in a peaceful society. It embraces diversity building interpersonal harmony, creating a better environment for an individual to the fullest extent possible. Though you wonder whether such societies do exist, we live in one of the most peaceful periods in human history ever, despite the wars between states, conflicts in various countries, cold wars, and so on, even though it’s hard to believe.

Peace is tranquillity, an ultimate level of completeness, and the most powerful weapon that can turn an individual or a society or a country or the whole world upside down. As the famous quote says, there’s no other way to peace, peace is the only way. Yet creating peace is not an easy task, it can be achieved through huge efforts, sacrifices, and determination. While many of us choose to stay silent in instances where we need to stand up and contribute to protecting and creating peace, some fight courageously in protecting the peace. Our peace. World’s peace.

In order to reward those unsung heroes, the Nobel Peace Prize was established as one of the five Nobel Prizes by the will of Alfred Nobel. The Nobel Peace Prize is offered to the person “who has done the most or the best work for fraternity between nations or the abolition or reduction of standing armies and for the holding and promotion of peace congress.” Each year many qualified people are nominated for the Prize and the final decision is announced in October by the Nobel Committee.

This year, the Nobel Prize for Peace will be awarded to Maria Ressa and Dmitry Muratov for their courageous efforts in ensuring the freedom of expression, which is a precondition for democracy and lasting peace.

Maria Ressa is a Filipino American, an author, a journalist, and co-founder of Rappler. Being a journalist and CEO of Rappler she has shown herself to be a fearless defender of freedom of expression. Rappler and Maria Ressa have documented how social media is being used to spread fake news, harass, and manipulate the public, and also, they have paid attention to murderous anti-drug campaigns and the Duterte regime controversial. Ressa is also one of the 25 leading figures on the information and democracy commission launched by reporters without borders.

Dmitry Andreyvinch Muratov was awarded the Nobel Peace Prize jointly with Maria Ressa has defended the freedom of speech in Russia for decades. He is one of the founders of the most independent newspaper in Russia, “Novaja Gazeta”, and has been the editor in chief of the newspaper nearly for more than 2 decades. Novaja Gazeta has published articles on corruption, police violence, unlawful arrests, electoral fraud, etc.

Dmitry Muratov and Maria Ressa have fought for the freedom of expression and the freedom of the press. Where there’s no freedom to express ourselves or to know the right information, will there be peace? It will be very difficult to promote peace between such nations successfully. In that matter, Dmitry Muratov’s and Maria Ressa’s efforts are too courageous and precious in promoting a better world and their efforts resonate very well with Alfred Nobel’s will. Moreover, Dmitry and Ressa were selected for the award from 329 candidates which included 234 individuals and 95 organizations. The award ceremony is being planned to be held in December this year.

Peace is the only way for the survival of humanity. Therefore, we too should be thankful to these heroes who fight for a better world for us.