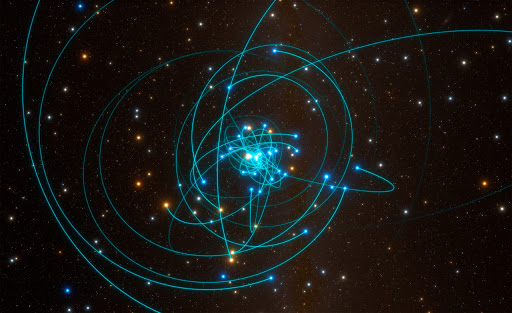 Uncovering the truths that the heart of black holes conceal has been on the chase since the late 1900s. The prediction for the existence of black holes dates even further. For many years, we considered the slightest chance to sneak a peek at the behavior of these supermassive invisible giants as hope. This year has ultimately brought this hope to some light as the Nobel Prize for Physics 2020 was awarded in recognition of the astonishing and remarkable discoveries made by Sir Roger Penrose, Reinhard Genzel, and Andrea Mia Ghez on one of the darkest secrets of the universe, black holes. While Sir Roger Penrose won half of the Nobel prize, Reinhard Genzel and Andrea Mia Ghez equally shared the other half among themselves.

A black hole, a place from which no light escapes, leaves us with no trace of its behavior. Hence, Sir Roger Penrose took a mathematical approach to analyze the behavior of a black hole. In co-operation with the ‘Theory of General Relativity’ of Albert Einstein, Sir Roger Penrose was finally able to prove the formation of a black hole which led him to the Nobel prize in physics, in an article regarded as the biggest leap in relativity since Einstein himself. The fact that Albert Einstein himself did not believe in the existence of black holes while formulating his famous theory, is a fact of interest here.

Trapped spaces, in other words, a hypothetical two-dimensional space where all light rays orthogonal to the surface converge as it approaches the future were key to this theory. Contemporary theories showed that this concept was not only an idea but a totally sound occurrence. Introducing a brand new technique of visualizing space and time called Conformal Transformations, Sir Roger Penrose proceeded to prove that once a trapped surface is formed, it is impossible to prevent the collapse of space and time to a singularity. Thus, proving the mathematical possibility of a black hole.

For decades, there was a strong belief that a black hole exists at the center of the milky way. It is well known by the name Sagittarius A*. In order to prove its existence, two groups of astronomers led by Reinhard Genzel from the Max Planck Institute for Extraterrestrial Physics and Andrea Mia Ghez from the University of California, Los Angeles analyzed the orbits of the brightest stars closer to the center of the milky way using speckle imaging technique in the near-infrared (the astronomical K-band).

With Ground-Based-Observations seeming to be the only possible way, the biggest challenge they faced was the blurring in the images due to Earth’s atmosphere. After years of hard work, these two groups were able to come up with the groundbreaking result which showed evidence of an astonishingly heavy and invisible object at the center of the milky way proving the existence of Sagittarius A*.

The mathematical model that Sir Roger Penrose proposed, based on the Theory of General Relativity showcases the mathematically sound idea of black holes forming. The teams of Reinhard Genzel and Andrea Mia Ghez proved this with evidence. Hence, the three laureates received the Nobel prize in physics for their joint discoveries on black holes.

The former half of the year saw the release of what is possibly the most important image in cosmology. Today, the peculiar discoveries of these three laureates have led us one step closer to uncover the truths that black holes conceal at their hearts.