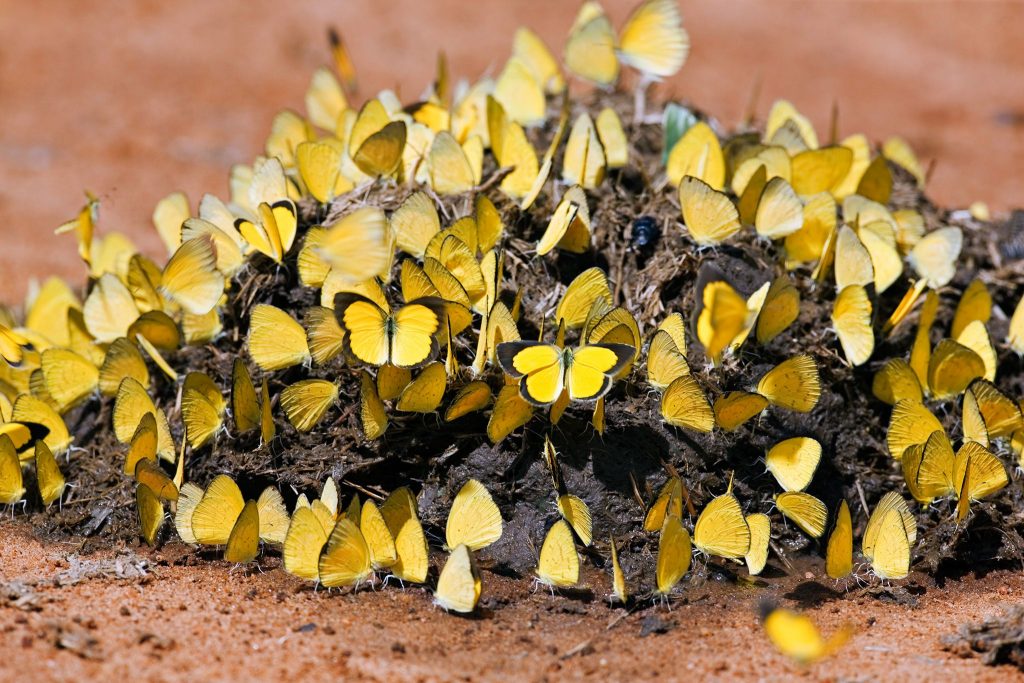 These six-legged, radiant winged creatures are universally accepted to land on flowers and feed on nectar. But the male butterflies go beyond this acceptance. They look for interesting components on the stuff that is accepted as dirty. Adult Lepidoptera (butterflies and moths) of many species frequently visit moist ground, perspiration, tears, excrements, or animal carcasses to suck water and dissolved nutrients, a behavior conventionally termed ‘mud puddling’. (Arms K, Feeny P, Lederhouse RC (1974))

Having completed their foliage scraping larval life, they have plenty of potassium stored in their body that is needed to complete the lifespan. But sodium content in plants are scares. They do not have enough sodium reserves with them. Sodium is probably a limiting resource for many herbivores. It is distantly related as butterflies and ungulates show a similar need for sodium. Adults of many Lepidotera feed primarily on nectar. Nectar contains very little sodium. (Hiebert & Calder, 1983) Mud puddling is thought to serve as a means of acquiring essential adult resources, particularly sodium. (Beck, J., MuÈhlenberg, E., & Fiedler, K. (1999))

It is the males that is engaged with the habit while females are not interested in puddling. But they are rewarded with the nutritional stuff from their partner. In most lepidopterans, the males pass complex spermatophores to their mates which are used to transfer, besides sperm, various types of nuptial gifts. These gifts may consist of minerals such as sodium or calcium phosphate, they may contain toxic secondary plant metabolites, or they contribute nutrients such as amino acids. (Beck, J., MuÈhlenberg, E., & Fiedler, K. (1999))

During their first mating, males transfer a greater amount of their abdominal sodium to females. This could be of considerable importance given that an average egg complement contains more than fifty percent of the total body sodium of females at emergence. (PIVNICK, K. A., & McNEIL, J. N. (1987))

Some butterfly species are known to live longer than the others. With regard to the use and importance of adult resources, lepidopterans occupy a continuum between two extremes. While some species (in particular many moths) utilize exclusively (or at least predominantly) resources stored throughout larval development for somatic maintenance and reproduction, others supplement their nitrogen budget by adult feeding or through multiple mating. The first strategy typically coincides with a short adult life span and a short, but intense period of reproduction, while the second strategy selects for prolonged life and more even, life-long egg production. (Gilbert 1972; Karlsson 1994).

Additional sodium is in some way important in female reproductive physiology supplemented with sodium produced more litters. Each consisting of more and heavier individual, virgin females live longer than mated females because of the low nutrient demands due to reduced egg production and egg absorption (Bell & Bohm, 1975). So, the females mating with the males that do puddling gets a higher reproductive success.

Even though the habit of puddling seems inappropriate for such radiant, iconized insects, they are forced by the nature to do so in order to deliver a better future generation.