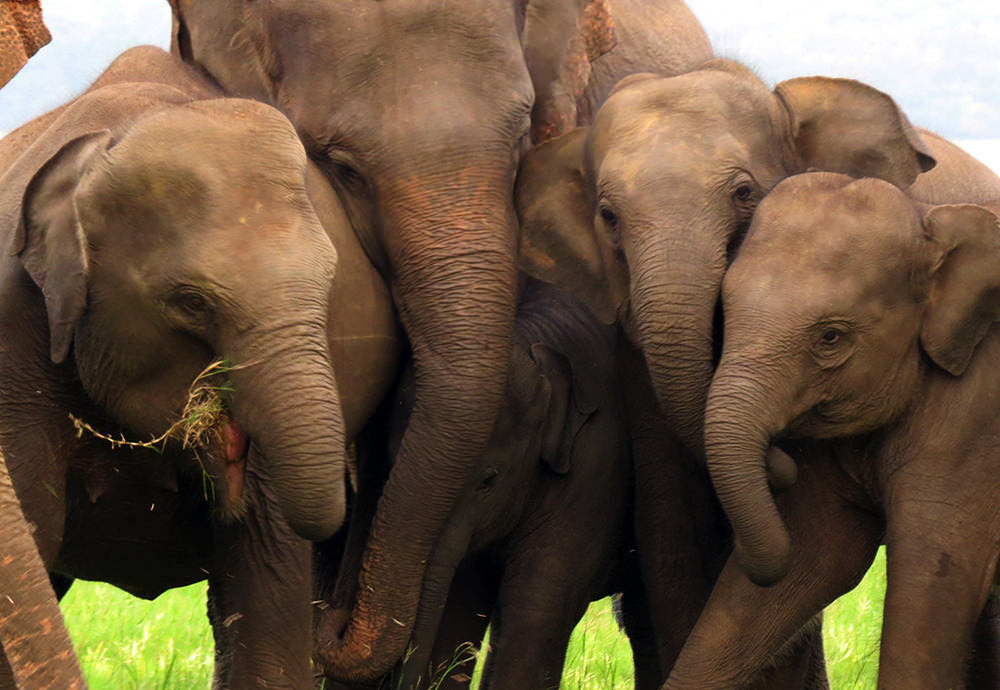 Sri Lankan elephant (Elephas maximus maximus) is currently categorized in to Endangered level (EN) in the IUCN Red Data Book. However the declining of elephant population day by day pulls them towards the Critically Endangered (CR) category which will ultimately expel them from the earth categorizing them to the category Extinct (EX).

Species Elephas maximus consists of three subspecies. Among them Elephas maximus maximus is the subspecies inhabited in Sri Lanka and is the physically largest and the darkest of the Asian elephant species who bear a more attractive appearance than their African relatives. It is thought that the Indian elephant (Elephas maximus indicus) is a close relative to Sri Lankan ones. Majority of the Sri Lankan gigantic herbivores inhabit in deciduous rain forests and the law land grasslands of the island. Their life span lies between 50 – 70 years and they stay in matriarchal herds. They feed on barks, roots, fruits and grass. Due to the interruptions on their daily routine and due to alteration of their natural behavior leads the reduction of the elephant population from the country. Loss of the habitats, decreasing the fitness of the populations, illegal trade and increment of captive breeding can be mainly identified as the leading actions for the decrement of elephant populations in Sri Lanka. Habitat loss is the main reason which restrict the distribution of these jumbos. Development of infrastructure; roads, houses, buildings and railway tracks fragment natural habitats and confine them to smaller portions of land and restrict the food gain and water gain of the elephants. Since they are much larger animals, their requirement of food and water is higher. They could only assimilate a half of the nutrition content from what they eat. Therefore, they need to consume more and more food. Restriction of jumbos into small islands cause the shortage of food and water and they die by starving. Development of infrastructure causes the interference of human in to the natural behavior of elephants. Since the natural sources of food are destroyed, they tempt to roam for villages in search of food and water. They unintentionally destroy the cultivations of the villagers in order to quench their prolonging starvation. This results the initiation of human – elephant conflict and cause the death of many elephants. Even the government along with villagers initiate several precautionary steps to minimize the conflict, to the moment almost all steps have been in vain. This happens due to the high brain power of elephants. Elephants are much more intelligent and they could adopt new strategies to overcome the physical barriers. Up to this moment they have overcome the restrictions done using crackers, gunshots and even electrical fences. They know how to avoid danger by having repeated experiences. Decreasing the fitness of the populations happens mainly due to the fragmentation of habitats and blocking of migratory paths. This restrict the mixing of herds and the mixing of genetic characteristics to give rise to well adapted juveniles. Decreasing of the number of tuskers in Sri Lanka is due to the loss of adult tuskers bearing the specific genes. Elephants own a complex communication system ranging from high vocalizations to law ones which even cannot be heard by humans. For long distance communication they use low frequency vocalizations and they could communicate with ones who stay over miles away. In warning of predators and during the breeding season male and female elephants exchange their calls in this manner. Fragmentations of land and constructions interrupt these communication pathways. This resists the selection of well adapted organisms in mating. Elephants also communicate using their olfactory senses. Separation of herds in to different islands and senses given by the cultivated crops provide them wrong signals and make them fall in trouble. Elephants gain the reproductive potentiality only when they are in mid-teen age and they possess the longest gestation period of an animal; 22 months which is nearly two years. Longevity of the reproductive age and gestation period decrease the probability of giving birth to a baby elephant.

Illegal trade and the hunting of elephants also has contributed towards the declining of elephant populations. During the British governing period in 19th century the elephant population had greatly dropped due to hunting them for leisure and for gaining tusks, hairs of the tail and ivories by the British rulers. Even today these are sold illegally escaping from the legal boundaries for unbelievable amounts of money. Increment of captive breeding of elephants for domestic use and religious purposes make them unable to contribute for the reproduction process and to confirm the continuity of the species. Most elephant holders do not pay attention on the wellbeing of the elephants. Domesticated elephants essentially need medicaments as they could not consume natural herbs to be cured by themselves for arising health issues. They need much care and protection without being harassed.

These facts shows that these Majestic proboscideans are subjected to high risk of extinction from the world due to human activities which influence them in different aspects. It is essential to confirm the continuity of Sri Lankan elephants in a land dominated by humans without letting them escaped from the island.