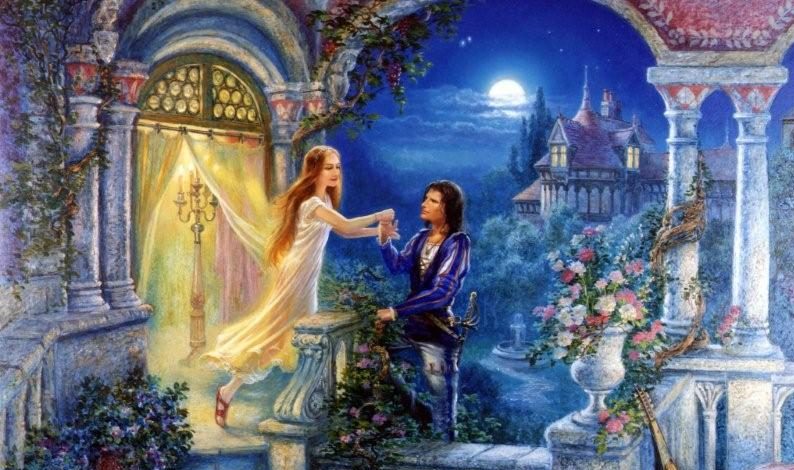 “Romeo and Juliet”, the greatest romantic novel in history is one of the best works of the world-renowned writer, William Shakespeare. Centuries passed yet the life and death of these two star crossed lovers remains a painful memory in all our hearts.

The story is set in the city of Verona. The two noble houses, the Montague and the Capulets are the protagonists of the story. The storyline runs along with the feud amidst the love between Romeo, the son of Lord Montague and Juliet the daughter of Lord Capulet itself is sufficient to presume that their relationship would be the peak point of destruction and that they aren’t meant to be together. This initial set up is quite depressing to the readers as Romeo and Juliet would be nothing if they aren’t together. Thus leaving us behind with a notion of desperation and eagerness to know what’s next, the poet begins narrating the story.

Commencing with a romantic humming in the air the poet describes Romeo who is madly in love with Rosaline, niece of Lord Capulet. Though there are dozens of attractive girls in Verona, Romeo himself is blindfolded by Rosaline who has never returned her love. Troubled by these events, Benvolio, a nephew of Lord Montague takes a masked Romeo to a Capulet feast. Unknowing, that they were Montagues behind masks, they are welcomed at the Capulet house.

Meanwhile, amidst all the excitement and the festivities, Romeo catches a glimpse of the so-called Juliet. Struck by this undeniably gorgeous woman he falls deeply in love with her tipping off Rosaline whom he was longing for a long time.

Love at first sight would be ideal in his case. Juliet was able to reach the deepest place in Romeo’s heart in just a matter of time.

Oh, she doth teach the torches to burn bright!

It seems she hangs upon the cheek of night

Beauty too rich for use, for earth too dear.

So shows a snowy dove trooping with crows

The measure done, I’ll watch her place of stand,

And, touching hers, make blessèd my rude hand.

Did my heart love till now? Forswear it, sight!

For I ne’er saw true beauty till this night

Romeo creates a perfect visual imagery in the reader’s mind about the infatuating beauty of Lady Juliet. Amidst the blooming one-sided love of Romeo, Tybalt, a nephew of Lord Capulet identifies him and is ready to throw him out yet events turn out soothingly calm as Lord Capulet interferes to stop them. Yet none knew this would be the start to whatever misfortune was coming next. Moving on the writer shifts to the adorable Juliet who herself gets muted on seeing the handsome young man. Even after knowing her as the daughter of Lady Capulet he still couldn’t suppress his feelings and neither his attraction towards this beauty. The same song was playing in Juliet’s mind at the moment she realized the depth of her love and what would come next. But was the fear of incoming war enough to stop these young lovers? No that’s impossible, amidst the paradise of their blossoming romance, the family feud seemed to be a small scratch which wasn’t even remembered though none were aware that small things could grow into huge issues with time. And then through all this chaos, the writer throws light on one of the memorable scenes in Romeo and Juliet are known as the balcony scene where Romeo sneaks into the garden and professes his love to Juliet who was longing for him in the balcony. We are taken through their conversation where Juliet unknowingly confesses her love with her blushed expression. Though Juliet wanted to pretend that she wasn’t an easy catch she instantly melted in front of Romeo which portrays the strength of love and bondage.

There before departure, Juliet pledged she would leave all her fortune and marry Romeo, and thus the couple went separate ways. With all in mind, Romeo leaves to meet Friar Lawrence to fix a date for their wedding. Even the friar himself is taken up by surprise at the new Romeo who used to be following Rosaline now wanting to marry Juliet. Realizing that the couple was made for each other, he sees it as the perfect opportunity to end the long-standing feud between Montagues and Capulets. And thus the couple weds with the blessings of Friar Lawrence.

In the meantime, we are taken back to the heated streets in Verona. The reunion of hot-blooded Capulet, Tybalt, and his friends with Romeo and his friends. This wasn’t exactly the pleasant reunion as Tybalt intended to duel against Romeo for barging into the party the other night but Romeo being a wise gentleman haven’t at all participated in any of the family quarrels. The fact that Tybalt was a relative made him turn down the request. Yet Mercutio, who was Romeo’s best friend could no longer stand this nonsense, challenges Tybalt but unfortunately, he dies in the duel. At the loss of his friend, Romeo is enraged and he kills Tybalt in return. An eye to eye, the battle ended with dark memories which would haunt their future forever. With all the arguments, the Prince of Verona banishes Romeo from Verona for violating his edict. On hearing this depressing news, Juliet is angered over the death of his cousin yet love wins over hate. The tears of grief she cried because Romeo had killed her cousin, turned to tears of joy because her husband, whom Tybalt had wanted to kill, was still alive.

Romeo who was banished by the Prince was now spending the night at Friar Lawrence’s place. Having banished from Verona, Romeo was half dead over the fact that he couldn’t meet Juliet. To him, heaven was where Juliet lives and everything else was pain, punishment, or death. Having advised by Friar to say a final goodbye to Juliet before departure, Romeo leaves to meet Juliet at the balcony. Though the two lovers were finally able to meet, it wasn’t a night of complete joy and pleasure as they were supposed to part soon. The daylight was unwelcoming and seemed to come too soon and for them, the morning birdsong was the most unpleasant sound as it was a sign for departure. With sad goodbyes, the couple departs.

This was just the beginning of the miserable story of two unfortunate lovers.

With Romeo gone, the Capulets planned to marry off Juliet to a gentleman, Paris. Frightened by her father’s plans Juliet tends to delay the ceremony with various excuses though she never revealed the fact that she was already married. With all the unsuccessful efforts she leaves to meet Friar Lawrence for help. With him, she executes a dangerous plan to stop the ceremony. Juliet was supposed to drink the potion which would make her still as dead for forty-two hours and the Friar himself would send for Romeo to come and get Juliet with him to Mantua. With this, she executes her part of the plan the night before the ceremony. The following day, Juliet is found dead and unfortunately, the news reaches Romeo in Mantua before the Friar’s messenger telling about the plan reaches him. With a heavy heart, he returns to Verona taking with him a vial of poison to end his life. On reaching the Capulet grave, he tries opening Juliet’s grave when he meets Paris. On seeing Romeo, Paris curses him and thus they fight and Paris dies. On his way, he had known the groom to be was Paris. Disturbed by the fact that he was dead, Romeo buries him next to Juliet. Seeing Tybalt, his cousin next to Juliet he addresses him as “cousin” for one final time. Here, the melancholic tone in air expresses Romeo depressed feelings witnessing his dead love and people he never wanted to kill. Then turning towards the sleeping Juliet, he says his final goodbye and kisses her. With all done he swallows the poison. Troubled by the fact that Romeo hasn’t received the message, Friar hurries to the Capulet grave. But to his utter disappointment, he finds Romeo and Paris dead beside the grave. While he was still in shock, Juliet wakes up and asks for Romeo. Seeing Romeo dead and the plan gone wrong, the Friar asks her to leave. Yet she, who was heartbroken at the death of her lover didn’t need to leave him alone and thus she ends her life with Romeo’s blade beside him.

In the meantime, a large crowd including the Capulets and Montagues garnered around the Capulet grave and Friar himself was caught by the guards.

There in the presence of the two households, Friar Lawrence confessed the unfortunate love of Romeo and Juliet and the plan executed to stop the ceremony so that the two lovers could be together. Later the servant who returned with Romeo relayed about the letters written by Romeo to his father where he admitted his marriage to Juliet and asked for forgiveness. With all cleared, the prince addressed the crowd gathered where he criticized the two families for their foolish behavior which lead to the death of the young couple. With heavy hearts at the loss of their dear children, the two families buried their long-standing quarrels and hate for each other. Although the two star crossed lovers left too early, they were able to unite their families for a better future. And thus William Shakespeare’s “Romeo and Juliet” fossilized in all hearts as the most reminisced love story of the millennia!