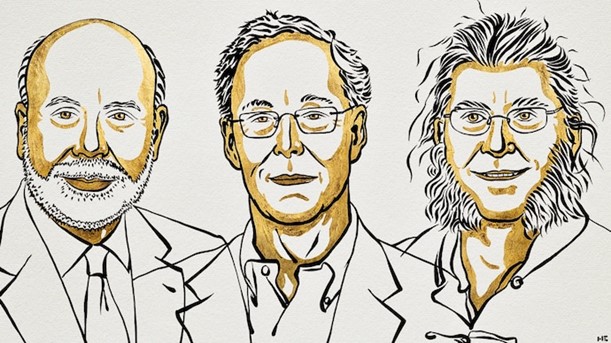 The task of awarding the Nobel Prize for Economic Sciences has been entrusted to the Swedish Academy of Sciences, an independent organization founded in 1739. The Academy is focused on promoting the sciences and strengthening their influence in society. While it takes special responsibility for mathematics and the natural sciences, the Academy is also invested in fostering the exchange of ideas between multiple disciplines.

This year’s Nobel Prize in Economic Sciences was awarded jointly to the American economists Ben S. Bernanke, Douglas W, Diamond and Philip H. Dybvig, “for their research on banks and financial crises”.

The concept of banking originated from the birth of trade as the early merchants of the world began the exchange of commodities around 2000 BC in the cities of Assyria, India and Sumeria. Compared to the modern age, these were primordial prototypes that started to evolve to become the modern banking systems during the Renaissance era in Italy in the burgeoning cities of Florence, Venice and Genoa.

The modern systems of banking revolve around certain principles one being the principle of liquidity. This principle is grounded on the fact that commercial banks are dependent on deposits and to meet the demand for cash, banks must keep a certain amount of cash in their custody. To understand why banking crises occur, we need to first understand the roles banks play. Fundamentally, banks serve as an institution that receives money from depositors and channels it to borrowers.

The means by which banks function and the crucial role they place in resolving the conflict between the needs of savers and investors was expounded by a model constructed by Diamond and Dybvig. According to their model, banks arise naturally as intermediaries, allowing individuals to deposit their money and withdraw it at any time they wish.

Parallelly, banks may lend money for long-term projects. This makes banks to carry out a process known as ‘maturity transformation’. This process involves converting the bank’s assets – the loans which have a long maturity – to the liabilities, which are the money deposited in the bank accounts.  Assets are considered to have a long maturity as borrowers who take loans from the bank are not required to make their payments early. The bank’s liabilities, in contrast, have a short maturity as the depositors can withdraw their money at any time. This process is the means by which banks generate liquidity, one of the key principles of modern banking.

While society benefits immensely from the process of maturity transformation, this process is also what makes banks vulnerable. Rumors circulating about savers withdrawing their money may create a self-fulfilling prophecy causing a bank run, where depositors rush to the bank to withdraw their money. If this mass withdrawal of money from the bank is beyond what the bank can cope up with, the bank would ultimately become bankrupt and would collapse. This would force the bank to recover the loans it made early which could cause premature termination of the borrowers’ long-term projects. Bernanke’s research explained this to be the cause of the Great Depression in the 1930s.

As a solution to this problem, Diamond and Dybvig proposed government-run deposit insurance. This gives depositors the assurance that the risk of losing their savings is minimized, thereby preventing bank runs.

As banks behave as intermediaries between borrowers and depositors, they are delegated with the task of monitoring the management of the money that is borrowed. This is carried out by performing an initial credit evaluation to ensure that borrowers are capable of returning the borrowed money.

The combined research of the trio of economists has been monumental in furthering understanding of the bank collapse during the Great Depression. Their analysis enabled governments world over to implement strategies to combat the effects of the pandemic on banks and financial institutions through regulation. Apart from deposit insurance, which cannot be considered a foolproof solution, other methods of regulating the limits of money that can be borrowed are necessary. Doing so reduces the risk of occurrence of financial crises and depressions facilitating more stable economic conditions for the greater good of many.