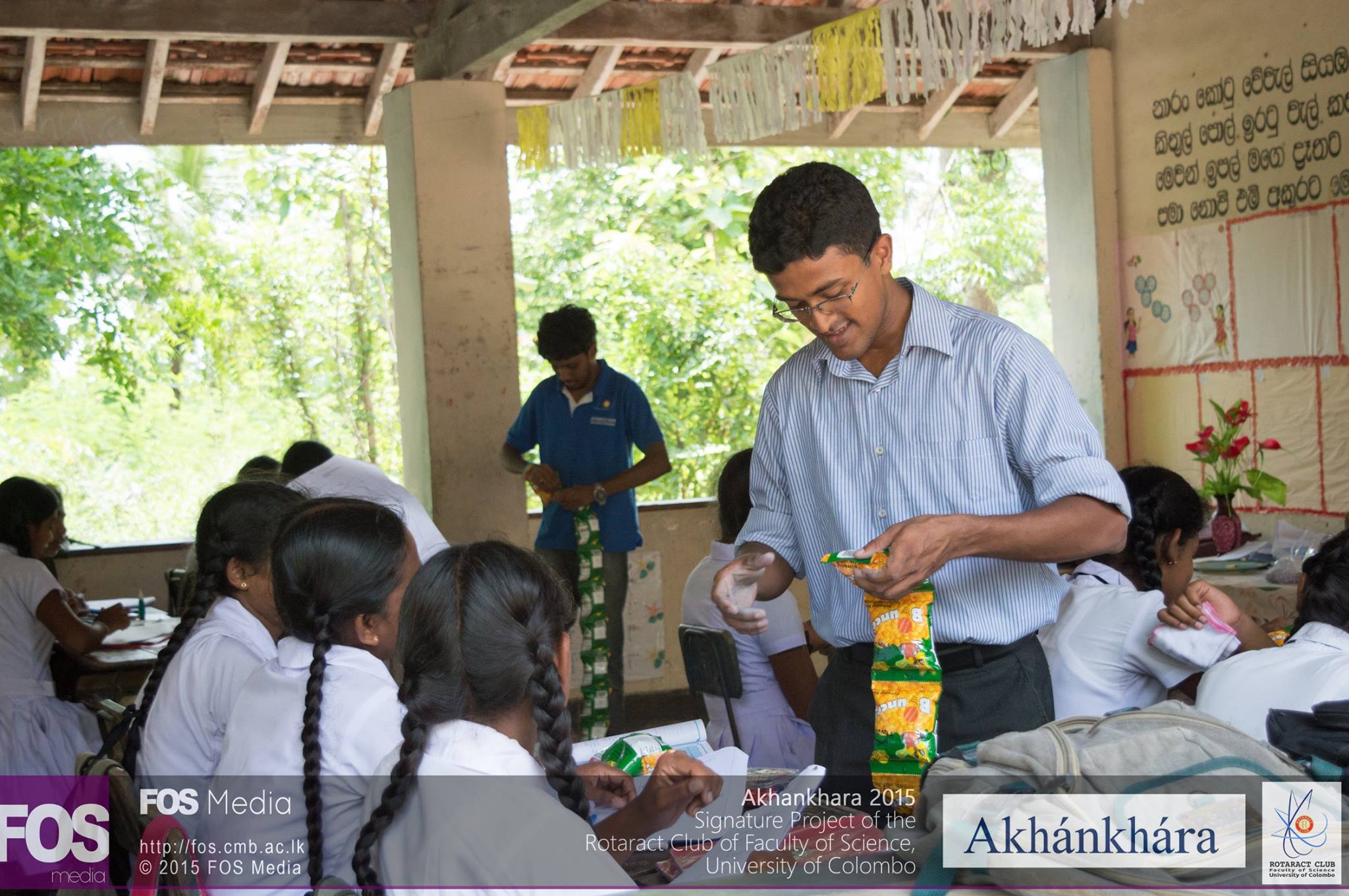 When we arrived at the MalaganeMahaVidyalaya it was already the second day of the project Akhankara.

Plan for that day was to redecorate and paint the school main hall and to teach the Ordinary Level students Mathematics.

I joined up with the group that was getting ready to paint. I got myself a sandpaper and got to work. Along with the old paint; drawings of stickmen and long division sums written on the wall all turned in to dust under my sand paper. Others have started filling up the holes in walls with plaster. When we finally got to painting, I think the first years had the most fun. As much as they were painting the walls, they painted each other. And the girls, who don’t usually get to workwith paint brushes at home were finally rebellious as they were the ones that were painting with the most enthusiasm. I went to see how our tutors were doing. Tharindu looked exhausted but he was a great teacher. Malith had that smile he always have. They also had Chalaniakka helping them. I’m sure those kids will remember this trio for a long time. The parents of the school children had prepared lunch for us. Honestly the main reason I was in this was for the fun of it. But those parents had so much respect, so much gratitude, I realized the real reason for why I am here. These students don’t have enough teachers or supplies. And we coming here to help them meant a great deal to them. Possibly encouraged some students who were at the end of their lines ready to give up on schooling altogether, to hang on for some more.

Finally the building was starting to look great. Almost back to its old glory. Principal of the school came from time to time to see how things were going. Building was painted blue on the outside and yellow on the inside. We even managed to do some surrounding buildings with the left-over paint.

Once the building was all done and Tharindu has finished his lessons it was time for the principal to address us. It was clear from his eyes how grateful he was, but he found some difficulty putting it into words but we felt it nonetheless, he specially thanked Tharindu and the tutors for trying to teach the kids something, even though they only had one day.

I only got to spend one day. But the following day, there was a medical camp for general check-ups, dental and eye clinic. And a programme to educate the community about general health was also held which was conducted with the help of Ministry of Health.

And the day before there has been a star observation night. Which I was not able to attend to. But people who did attend told me that they were even able to see the Milky Way nicely. I hate my luck for making me miss that, it is near impossible to view the Milky Way in an urban area, all thanks to light pollution. I should also mention the tutors for their contribution.Biology was taught by Chamikaraayya and Chalaniakka who are in their 3rd year, Physics taught by PrarthanaYomaland Navindra of 2nd year and Geethayya from 3rd year and mathematics by Tharindu and Malith from 2nd year, they are the ones that really had a lasting impact on those students’ lives. At the end of his day teaching, I heard Tharindu gave an important message to the students, to do their best in studies and have an ambition to enter into a university one day. Even though we hear this sort of advice every day, I’m sure they seldom hear or see what proper learning would get them.

I’ll end this by drawing attention to the poem I started with. Call it coincidence, it was written on the blackboard of one classroom. At that time I thought what a glum poem, cutting down a massive tree to create a giant tsunami. But maybe the writer wanted emphasize what a collective group of people can achieve, if they got a big enough axe to cut down the big obstacles blocking their path.