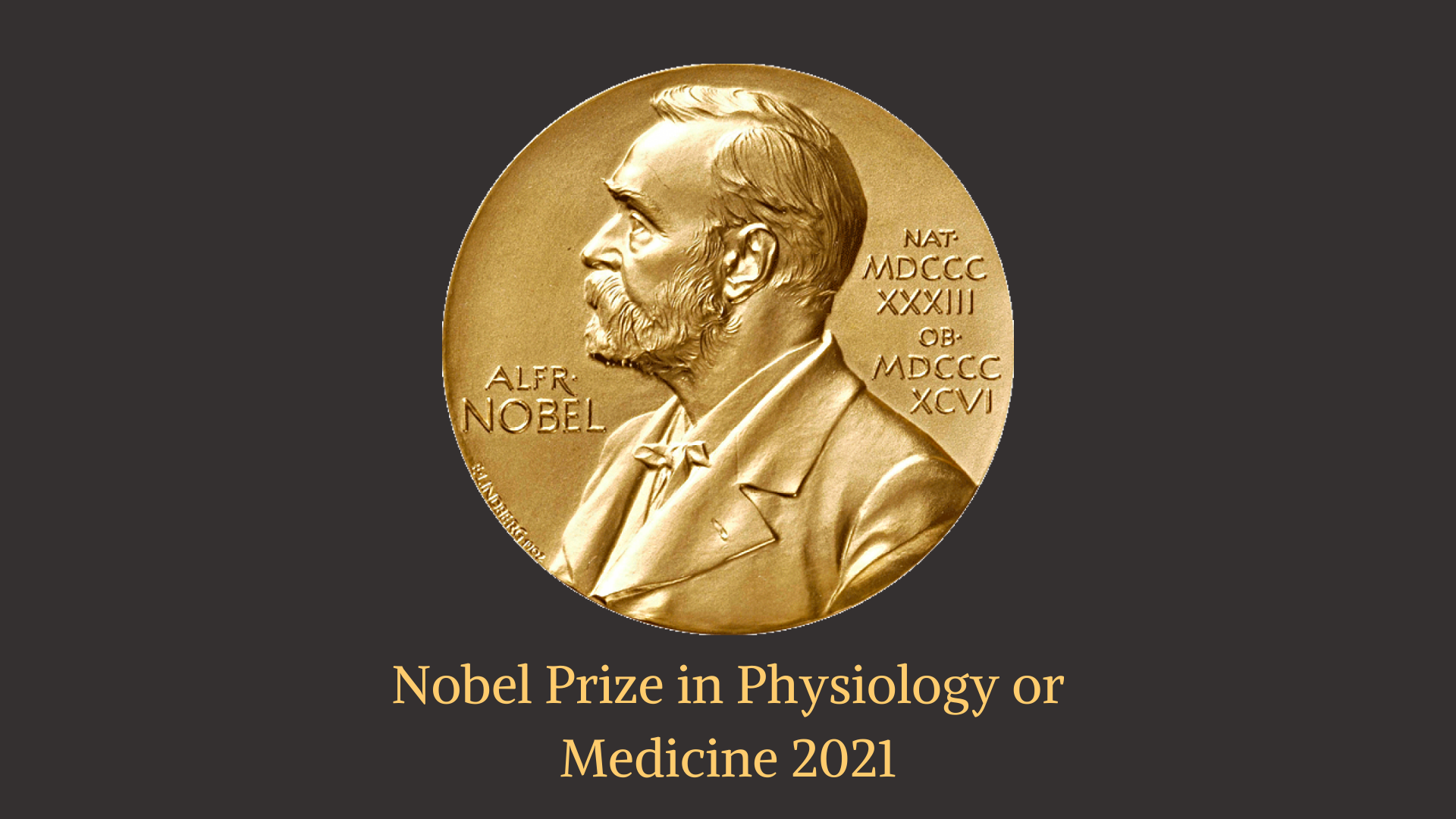 What makes us who we are? This deep, philosophical question is one that mankind has been struggling to find answers to. Most argue that our lives are amalgamations of our sensory experiences – each of those providing a unique perception of the world we live in. Therefore, understanding the role our senses play and the mechanisms by which they operate is key to our understanding of both ourselves and our world.

The mystery about what allows us to sense and feel was solved by the discovery of different sensory nerve fibers by two scientists, Joseph Erlanger and Herbert Gasser. This finding was so monumental to our understanding of human physiology that they were awarded the Nobel Prize in Physiology or Medicine in 1944.

Despite the significance of this discovery, there still existed a void in the understanding of how these sensations arise – especially how mechanical and temperature stimuli are translated into electrical signals that can be processed by our nervous system.

Towards the latter part of the 20th century, biologists began exploring further into the world of life, moving past the cellular and digging deeper into the molecular level. This change influenced novel research in the field of medicine and its numerous subdisciplines, providing us with the answers to many questions about our fascinating bodies.

77 years after Erlanger’s and Gasser’s discovery, two scientists – David Julius, a professor of physiology at the University of California, San Francisco and Ardem Patapoutian, a molecular biologist at Scripps Research in La Jolla, California – jointly receive a Nobel Prize for their work in solving how sensory neurons convert these stimuli into electrical signals through their discoveries of the receptors of heat and touch.

Discovering the receptors was not an easy endeavor by any means. Ardem Patapoutian and his team were aiming to discover the mechanosensitive receptors sensitive to touch and pressure in vertebrates and worked on cell lines that were sensitive to such stimuli. In the lab, the stimulus was the poking of a micropipette. After identifying 72 possible ion channel receptors – types of proteins that allow ions to pass across membranes in cells – that Patapoutian’s team assumed that the receptor would get activated by mechanical force, they got to work.

The team inactivated the genes that coded for those receptors one by one to find the gene that codes specifically for the mechanosensitive ion channel. Ultimately an ion channel receptor was found which they named Piezo1, after the Greek word for pressure, píesi. A second receptor that was also involved in touch and pressure reception was discovered and named Piezo2.

These channels have been shown to play important roles in the functioning of our bodies, especially in regulating bodily processes such as blood pressure, respiration and control of the urinary bladder. These receptors also give us the ability known as ‘proprioception’ – which is the way our body senses its movement and position.

At the University of California, San Francisco in the latter part of the 1990s, David Julius and his team began researching to identify the gene that codes for sensing capsaicin – the chemical compound in chilli peppers that generates that hot, burning sensation in our mouths that we are all familiar with. Initially, they started with making a gene library that contains the sequences of millions of DNA fragments. These gene fragments are expressed in the sensory neurons which are sensitive to touch, heat and pain.

Next, they used cultured cells – that are generally not reactive to capsaicin – to express these genes individually to identify a gene that enables cells to be sensitive to capsaicin. This laborious search was rewarded after the successful finding of a single gene that could perform this function. This gene coded for a protein called transient receptor potential vanilloid 1 (TRPV1) – an ion-channel receptor – which after further analysis was also found to act as a heat-sensing receptor that gets activated at temperatures above 43°C.

This paved the way for further research into other such receptors. Subsequently, another receptor responding and activated by cold-called TRPM8 – was discovered by the usage of menthol – a chemical compound produced in mint leaves that gives a cooling sensation.

“For the greatest benefit to humankind”

The Nobel Prize in Physiology and Medicine, awarded by the Karolinska Institute in Stockholm, is an accolade that recognizes invaluable discoveries and research that has made a significant impact on the progression of humanity.

The findings of David Julius and Ardem Patapoutian have profound implications, especially in understanding different disease conditions such as chronic pain and for the treatment of such afflictions. Their findings have kindled further interest in such fields of research and have contributed immensely to the widening of our understanding of the human body. 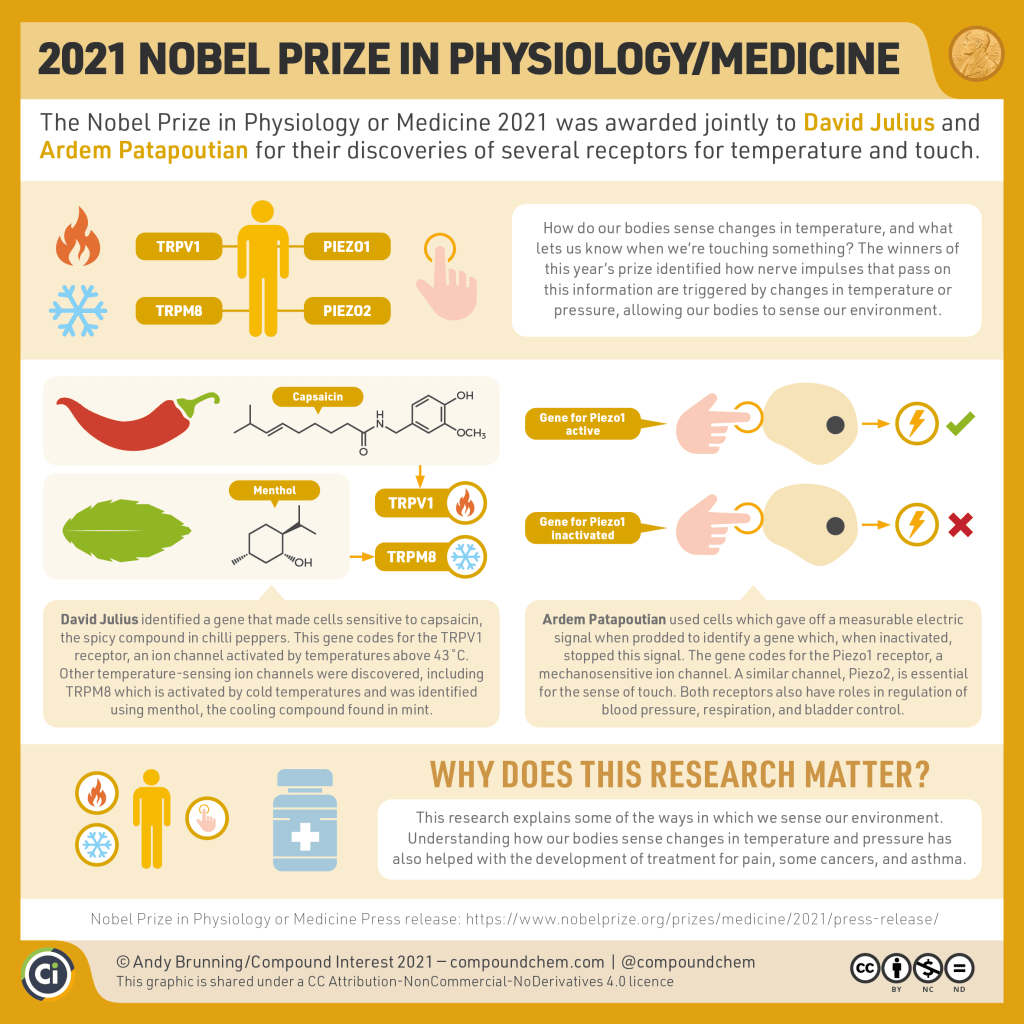