Home » Kavindya » She hides her silvery eggs in golden sand 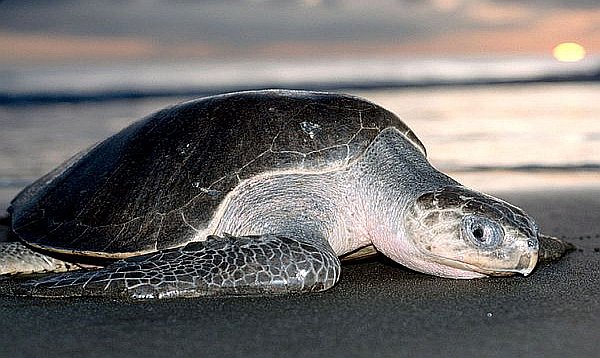 Each and every individual born to this world has an assigned task by mother nature to be fulfilled for the continuity of their own species. They have to survive till they reach the reproductive age and then breed their young ones before they get popped-off. Animals are vastly diversified, in order to reduce the demand for limited natural resources and thereby decrease the competition and ensure the continuity of the species. They use such curious strategies which aid them to survive, ones that we will never think of. They have unique tricks to enhance their reproductive success. Most animals breed their young ones in a completely different niche that have different conditions from those required by the adults.

Turtles are one group of animals with such a diversified body plan and behavioral pattern, which have made them successful. Turtles evolved a hundred million years ago and are among the oldest reptiles that are extant today. Even today, they are alive with the very same body plan of their ancestors. As they dwell in the sea and rarely come to the shore, seeing a turtle is a once-in-a-while chance. However, females have to reach the shore to lay her eggs and males sometimes land on the shore to have a rest. The mother turtle is so mysterious that she travels thousand miles to reach the very same shore that she was born, completing the greatest journey in her life. Most often, she visits shores during full-moon days during which the surrounding get lighted by a yellow creamy light.

It was a midnight in March, 2018 when we were on the beach-line of the Turtle  Conservation Center of Kumana National Park, during the first field visit as Zoology special students. The shore is recognized as a site where turtles come for nesting, during March to August. Since it was just the first few days of March and it was the crescent-moon on the top of the sky, we all had an indecision whether a princess will land on the shore. But truly, all our hearts wished we would get to meet her in the gloomy darkness. It was 12.30 in the midnight. We were stepping to the stealthy sea beyond the broad sandy beach. The sky was faintly lit up and the silence of the tranquil night was disturbed by the roaring of the sea.  Once we were close to the moaning sea, we just set the torch light to the reversing waves. Ten hearts stopped for a while by the thing that was unrevealed by the foamy wave. She had come! We had no doubt about the reason why she arrived to the same beach in which she got hatched. She had waited until all the creatures fell asleep, so that nobody will witness her nest. We switched off the light and remained silent, letting her roam over the beach, to select the nesting place for her kids. Weak light of the moon allowed us to see her path and we silently followed her. Though she was a good swimmer, crawling on sand was not an easy task with her huge body.  She moved up in the beach for about thirty meters and started digging her nest carefully in sand using her flippers and started depositing her developing shell enclosed-babies. She took around one and half hours for the task. She had to put a great effort despite the fatigue of swimming for miles and miles. Her pain of labor could be imagined from the gummy tear flowing on her scaly cheeks. She kept her eyes closed when she was depositing her last few eggs but she had the courage of a mother to completely mask the nest. She could move kilos of sand with a single throw of her front flipper. Hundreds of silver eggs were buried in the golden sand and there was no sign of a nest when she finished the task. The way she pressed the sand with her belly region, raising on her flippers and dropped on the nest pit, made everyone around sensitive. She was tricky enough to flip on sand, so that the exact location of the nest could not be determined. She had spent around three hours out of water, for the sake of her future generation. She had to leave the shore before the sun rose. Hence, she could not rest on the shore. She might visit the same shore with another hundred hopes, after another two or three years of time. The mother turtle was so tricky on her way back to the sea that she traveled in a zigzag path, making the predators evade her sandy nest. Those leathery eggs will hatch after a few weeks and the tiny creatures living sheltered within a shell might crawl into the sea with their fragile flippers. Babies will never get to know of their mom or dad. She was an Olive Ridley turtle with a short snout and an olive green carapace, considered as the most-abundant turtle species in the world. They are classified under the vulnerable category of the IUCN Red List of Threatened Species. They nest only in few beaches. The few hours spent with her would be one of the most remarkable moments in our lives.

There are several purposes as to why turtles bury their eggs in sand. They do nesting during the warmest months of the year. Burying helps in maintaining an optimum temperature for the eggs to mature enough to be hatched. Hiding them in sand, provide protection from the surface predators. Leathery eggs having soft, porous shells get sufficient moisture and stay undried. Turtles are good swimmers in the sea. But once they are off-shore, they could not swim, nor they could hide. They are just unarmed. This make them easy targets for hungry predators like crocodiles. Some human hunt the mother-turtle, once she has completed her labor and also collect her buried eggs. In Sri Lanka, wild boars are the major treat for the laid eggs in the nest. Baby turtles coming out of eggs, crawl on sand in a hurry to join the coming waves. But many have bad luck and lose their lives, even without getting their flippers wet. Hungry crabs on the shore, drag these babies to their burrows. Small fellows are a good snack for waders and scavengers such as vultures. Majority who are lucky enough to swim into the blue ocean, will end their lives by several means. Only the few who are well-fitted, will grow into an adult and breed their young ones when they attain their twenties.

Mother-turtles are also mothers with courage but will never roar. Worldwide, there are many turtle conservation programs. Yet, many nest-pits get hunted and destroyed, many adults get prayed, get tangled in fishing nets, letting them remain in the vulnerable category for years, with a decreasing trend.