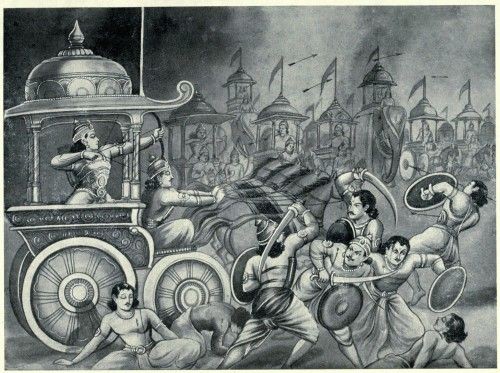 Bright red blood gushed out of the freshly opened wounds, still, the warrior seemed not to give up his stance. He stood there proudly, unbending to the will of his enemies.

The word seemed funny. Especially when addressing one’s own family.

Funny isn’t it. The very ones who ought to have pampered him, were trying to kill him. To inflict as much pain as possible.  Yet the young warrior’s thoughts were not on his uncles who were inflicting as much pain as possible but on the one standing as a mere spectator. Unable to form words to prevent such happenings and unable to take part in it.

This was one of the rare times he had seen the mighty warrior up close. None would have believed him had he said what he saw, they would have even called him delusional. Yet, he was so sure that there was a flicker of regret and paternal love mixed with helplessness in those bright knowledgeable eyes of the one who stood aside. Funny. For it was this very warrior who had sworn in the arena many years ago to kill his father.

If that enmity wasn’t a ruse then why would he wish anything good for him? After all, he was his father’s son. If he hated his father so much as to vow to kill him personally on the battlefield. Then why would he not take part in the torturing of his son?

These thoughts kept on crossing the mind of the young warrior as he tried to parry the attacks showered upon him.

He had to keep on countering the strikes for another five hours. For the conch shall sound marking the end of the war for that day. He also knew that he couldn’t attack for then his energy which has been helping him sustain in this battle for this long will drain off. As the clanking of the sword resonated through the air, the young prince was taken back to a specific scene that took place about two days back…

Sitting on the banks of the flowing river, the young soul was trying to meditate in order to clear his thoughts and calm the storm raging within his mind.

He had just heard from his blushing wife, that he was going to be a father.

These words which usually would make a man feel pure joy had caused happiness yet distressed him too. Yet wisely he hid his sorrow from his wife who was brimming with happiness and spent some time showering her with love till his mothers had taken her away with them to their chambers.

Now sitting on the banks he reflected on his thoughts of the new information he had heard. They were on a battlefield. Death was unavoidable. He was a born warrior. So turning away from the battle was one thing he would never do. Yet he didn’t want that very child to spend the rest of his life without a father. He had suffered his early years’ yearning for his father’s love and he firsthand knew, that no matter how many people pampered him, there was still a part that had yearned for his father. He did not want his own child to go through that. Nor his wife. They were after all recently married. Yet here he was on a battlefield, spending time musing over war strategies rather than spending time with her.

This inner turmoil didn’t allow him to free his mind and relax himself enough to enter a meditative state.

Frustrated at himself he gave up trying to meditate and rested his head on his knees.

He felt a presence next to him after a while. Assuming it might be his maternal uncles, his usual confidante, the young prince poured out all the sorrows of his heart.

When he realized there was no response, the prince lifted his head to only receive one of the biggest shocks of his life.

Seated next to him was not his uncle but his father’s mortal enemy.

He had just poured all his insecurities into the one who had vowed to kill his father and the one his father had vowed to kill. What surprised him was, that he did not attempt to mock him or taunt him yet sat silently staring at the glorious sun. Lost in the ambiance of nature, one would have perceived. But not him, for he knew that look. The look of helplessness and hopelessness. The look of pure sorrow and angst. The look which his elder mother usually had when remembering the day when she was insulted.

‘To live or to die, it truly is never in our hands. But what is, is to cherish and love those who we truly love while we are alive. Death on a battlefield is inevitable yet procrastinating about the events in the future shall affect your happiness in the present remember prince. Not all die on the battlefield.’  Said the king, without taking his eyes off the blazing sun. Then without a word, he stood up, caressed the head of the younger one, and walked away.

Even now, staring at the great warrior being so reluctant about the activities of his friends, the prince wondered why he had not taunted him instead and yet offered calming words of advice.

Focusing back on the present, he realized his sword was held in a lock with his opponent. As he was trying to overpower his opponent and release his sword he felt a strong blow on his head making him lose his balance and fall face first.

He was slowly losing his consciousness and still the conch signaling the end of battle had not echoed.

A second blow fell on him from the back. He knew that till he closed his eyes, they were going to attack him.

Suddenly he felt a strong hand pulling him up to his feet and glowing amber eyes reflected his blood-red ones.

‘The world shall hail, not your father nor me as the greatest warriors of all times but you, O brave one. Your final stand today shall be remembered throughout history, marking you as the unyielding warrior of all times. But now rest young prince. Rest knowing you too valiantly parted your loved ones in the greatest war mankind has ever seen.’

These were the last words that echoed in the ears of the young prince before a sharp pain pierced his heart and he finally closed his eyes. Felt a drop of tear trickle down his neck, the last sensation before his soul departed the world.