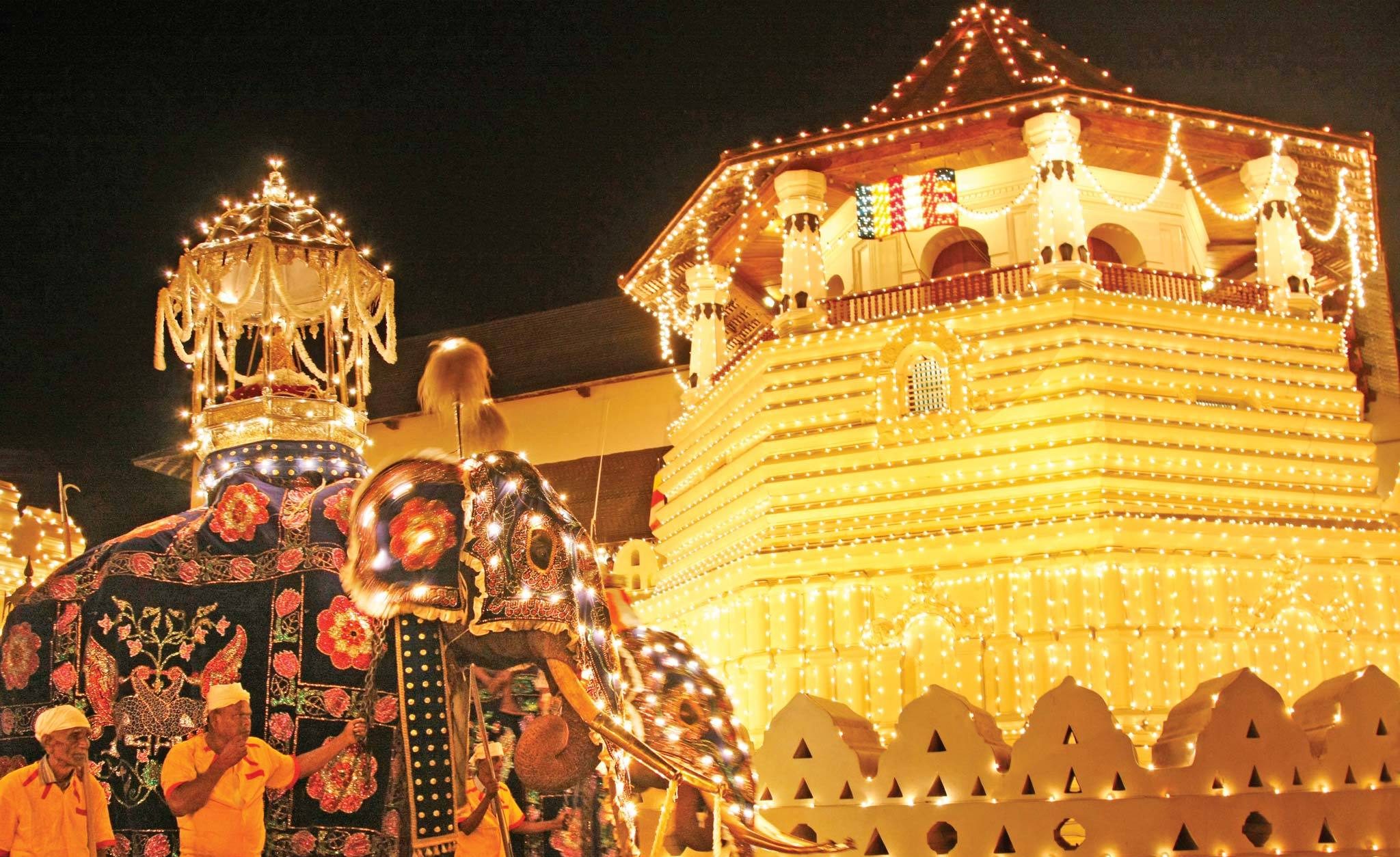 Esala lunar month (August) can be defined as a blessing month for Sri Lankans. Every year in this month, with the arrival of summer, the heartland of Sri Lanka, Kandy city, becomes busy with hordes of locals and tourists, just like a bee-hive. They are gathering to view the most sophisticated grand procession in Sri Lankan culture. That is none other than the “Esala Dalada Perahera” or the “Nuwara Perahera”. Esala Perahera is considered as the essence of the country’s Buddhist celebrations. It is celebrated chiefly to honor the sacred tooth relic of Buddha, which has been housed at the Dalada Maligawa (The Temple of the Tooth Relic).

‘Perahera’ is a Sinhala word that has a denotation of a parade. One must eye-witness this spectacular event at least once in their lifetime.  Esala Perahera is considered one of the most beautiful of such cultural processions all over Asia. It’s the only pageant, that can be witnessed right throughout for 10 consecutive days, featuring fire-breathers, drummers and other musicians, Kandyan dancers, other cultural dancers such as kavadi, whip crackers, along with more than fifty lavishly embellished Tuskers and elephants. These giants sententiously walk along the roads of the ancient citadel, showing the dignity of unique, rich culture, to the world.

The Perahera rituals start with the ‘Kap situweema’. The main Perahera followed in order by, Dalada Maligawa Perahera, Natha Dewala Perahera, Maha Vishnu Dewala Perahera, Katharagama Dewala Perahera and Pattini Deawala Perahera (which is the only procession that has women dancers). The four Dewalas (Temples dedicated to these gods), which are situated in the vicinity of The Temple of Tooth, organize these processions to honor the four guardian gods (God Natha, God Vishnu, God Skanda, and God Pattini) of the Tooth Relic. Hence the Perahera is mostly an intermingle between Buddhist and Hindu religious customs. After five days of ‘Kumbal Perahera’, the ‘Randoli Perahera’ would start, giving us out-of-this-world experience. The name ‘Randoli’ means ‘Queen’s Palanquin’. King Keerthi Sri Rajasinghe is the one who had decreed that the palanquins must be carried at the end of the Perahera. It is believed that in ancient times, up to 1775 of Palanquins were carried in the Perahera. After the grandest last Randoli Perahera, the whole festival will come to an end with the ‘Diya Kappema Ceremony’. Esala Perahera has been changed occasionally over the past years.

The great history of this spectacular festival is riveting as much as its annual routine. As recorded in Mahavamsa, the Esala Perahera has been held annually, since the 3rd century BC. It all goes back to 328 AD, where a critical incident took place in our authentic history. At that time the Kalinga kingdom of Bharath (India) was ruled by king Guhaseewa. Due to the continuous conflicts that occurred, his daughter, princess Hemamala and his son-in-law, prince Dantha arrived at Lankadweep (Sri Lanka) in procession, with the sacred Tooth Relic of Buddha hidden inside the princess Hemamala’s hair. It was during the reign of king Kithsiri Meghawanna (305-331 AD) in Sri Lanka. Hence King Kithsiri Meghawanna become the first ruler to honored the sacred tooth relic, with Dalada Perahera. Following his path, The rulers that ruled afterwise conducted and held the event along with all the rituals and poojas, as a showcase of guardianship of the sacred Tooth Relic. Every king that protects the sacred Tooth Relic as their life mission, was considered as a true leader with sovereignty.

At the end of the last Randoli Perahera, the Perahera enters the ‘Adahana Maluwa/Gedige’. It is the place where king Vimaladarmasuriya I (159 –1604 AD) spent one night, on his way to Kandy from Delgamuwa, having temporally placed Tooth Relic on the Gedige Shrine there.

The modern pageant was originated during the reign of the Kandyan king, Kirthi Sri Rajasinghe (1747-1781 AD). King Rajasinghe decreed that the Relic must be taken in procession to the public and masses to worship. Until that the Tooth Relic was considered as a private property of the king.

People who belonged to different occupations based on their ‘Kula’ (castes), contributed to Perahera as ‘Rajakariya’, which in terms of duty, to enjoy Royal land grants in return from the king.

In 1815 AD, after Sri Lanka was entirely colonized by the British,  and became a kingless state, they initiated the ‘Diyawadana Nilame’ (Chief Custodian) position to continue the traditions and the Perahera, under his custody. From that day to the present day, Diyawadana Nilame holds the responsibility of organizing the Esala Perahera conveniently. As a tradition, before starting the rituals, all the officials are granted permission from Diyawadana Nilame to start the procession.

From ancient, Esala Perahera was prioritized by the governance, since it is believed that these poojas and rituals can bring timely rain and good harvest for the kingdom.

In 1829, there was a severe drought all over the island. Under the advice of Kandyan chiefs, the British colonial governor at that time, Sir Edward Barnes, held the Esala Perahera, with the intention of rain. The result was a heavy downpour. The Kandy lake overspilled and the low-lying areas were almost submerged due to the floodwater. ‘Dantha Dathu Charithra’ or ‘Dalada Siritha’ is a book, written during the reign of King Parakramabahu IV (1302-1326). The book stated 38 statements, on how the pageant should be held. It says,

“When there’s no rain, make offerings to the Tooth Relic in this manner”

Holding a long, proud history, Esala Perahera has become a symbol of our country internationally. It has to be said that this breathtaking, colorful festival is based on prioritizing the Buddhist teachings of respect, kindness, and ultimate humanity. That glamorous casket (Karanduwa), that holds the sacred Tooth Relic, is worshipped by elephants, humans, and the divinity.

The Chinese traveling monk, Fa-Hien has inked the beauty of Esala Perahera in his records, where the reader can visualize the enthralling past of the festival lively from the mind. He wrote,

“The road was decorated with brightly illustrated paintings and  sculptures that depicted the life of the Bodhisattva. These were very life-like…”