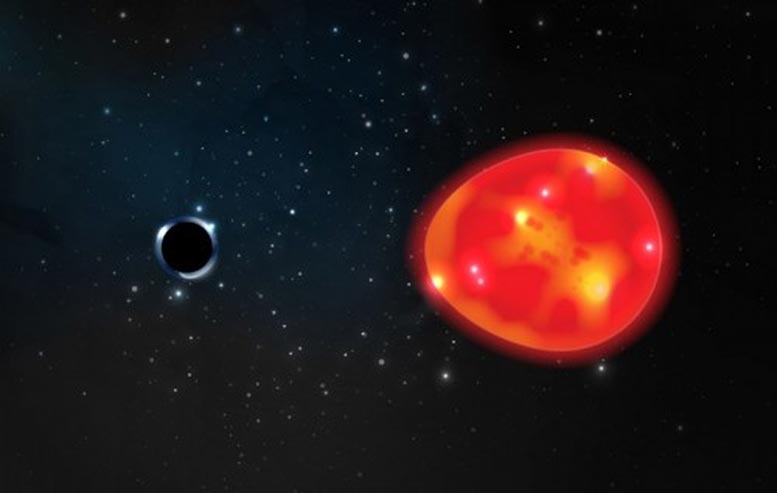 After the much-celebrated breakthroughs of Prof. Ranga Dias in the field of superconductivity, another Sri Lankan has stolen the spotlight in physics. This time it is in the field of astronomy. Tharindu Jayasinghe, a doctoral student in astronomy at The Ohio State University, along with his team, has just discovered the closest black hole to the earth (dubbed ‘The Unicorn’), and of the smallest ever.

What Are Black Holes?

Black holes are regions of spacetime where gravity is so strong that not even light can escape from it. They form when some stars die, shrink into themselves, and explode. Their existence was first predicted by Einstein’s general theory of relativity in 1915. And in 2019, a team consisting of scientists such as Katie Bouman first published the direct image of a black hole. Finding and studying black holes is vital for astronomers, as it tells them how stars form and die.

But How Do Astronomers Identify Them?

Black holes are black…literally. They do not emit light, nor any kind of rays that other objects emit in space. Hence they are electromagnetically silent. Most known black holes were discovered when they interacted with a companion star.  A black hole may ‘strip off’ material from a companion star, which results in the emission of X-rays. These X-rays are very prominent, and therefore of course, visible to astronomers.

‘The unicorn’, though, was found via a different method.

When The Ohio State University’s Prof. Todd Thompson and, doctoral student and an Ohio State presidential fellow, Tharindu Jayasinghe, analyzed the telescopic data of a particular red giant, they found something unusual. Some invisible object appeared to be orbiting the red giant, which caused the light from that star to alter in intensity and appearance at several points around the orbit.

Something was tugging at the red giant and changing its shape. That pulling effect, called a tidal distortion, is an indication that something is affecting the star. One option was a black hole, but it would have to be small, less than five times the mass of our sun.

That tidal disruption is created by the tidal force of an unseen companion, in this case, a black hole.

“Just as the moon’s gravity distorts the Earth’s oceans, producing high tides, so does the black hole distort the star into a football-like shape with one axis longer than the other,” says Prof. Todd Thompson.

This black hole, dubbed ‘The Unicorn,’ partly because it is one of a kind, and partly because it was found in the constellation Monoceros (The Unicorn), happens to be about three times the mass of our sun. It resides 1,500 light-years away from Earth, thereby making it the closest black hole to the earth.

Interestingly till this team started analyzing it, it was basically hiding in plain sight. That is because this particular black hole did not interact with the red giant, hence did not emit any X-rays, as most black holes do.

Theoretical models suggest that there could be thousands of these non-interactive black holes in the galaxy. And scientists from all over the world are very keen to locate them. With this latest discovery, these researchers have proved that you can identify such black holes which do not interact with companion stars and have very little X-ray activity.

And finally, as black holes seem to be playing hide and seek with astronomers, we, the astrophiles, eagerly await the next exposure.