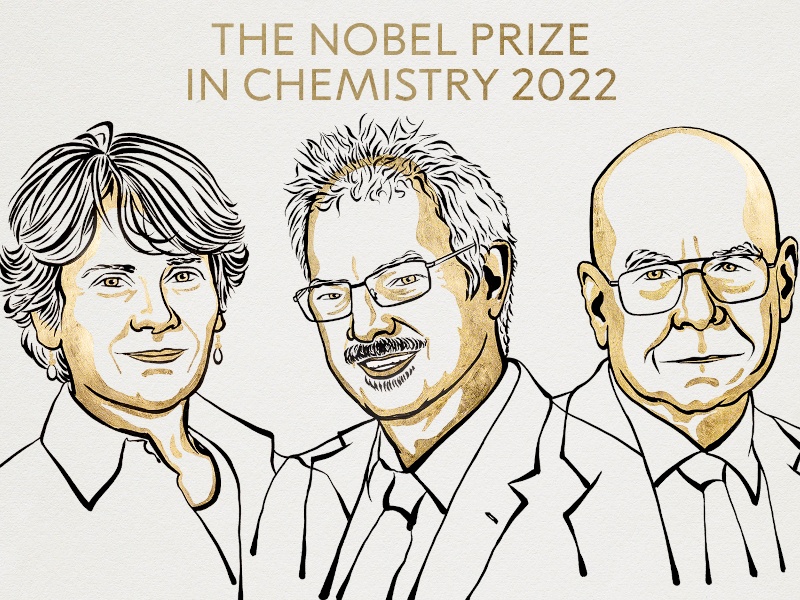 The Nobel Prize in Chemistry for the year 2022 is shared among three prominent chemists; K. Barry Sharpless, Morten P. Meldal, and Carolyn R. Bertozzi, for laying the foundation and the development of ‘click chemistry’ and ‘bioorthagonal chemistry’. K. Barry Sharpless along with his colleagues Hartmuth C. Kolb and M. G. Finn summarized the concept of ‘click chemistry’ in the article Click Chemistry: Diverse Chemical Function From A Few Good Reactions in 2001. Before long, Morten P. Meldal along with his colleague Christian W. Tornøe discovered the Copper-catalysed cycloaddition reaction between Azides and Terminal Alkynes. Around the same time, Sharpless along with his colleagues Valery V. Fokin and others – Independently of Medal and Tornøe – identified that Cu catalyzes the 1,3-dipolar cycloaddition reaction. Carolyn R. Bertozzi took ‘click chemistry’ to a new dimension by developing click chemistry reactions that can happen inside living cells. Bertozzi published the Copper-free click reaction, called the Strain Promoted Alkyne-Azide Cycloaddition in 2004 and illustrated that it can be used to map biomolecules called ‘Glycans’.

“This year’s Prize in Chemistry deals with not overcomplicating matters, instead working with what is easy and simple. Functional molecules can be built even by taking a straightforward route,”

~ Johan Åqvist, Chair of the Nobel Committee for Chemistry.

The concept of click chemistry was introduced by Sharpless as a ‘streamlined’ synthesis process where chemical compounds could be synthesized using a limited set of highly robust and efficient reactions, that would not only speed up the manufacturing process of these compounds but also lead to higher yields of pure products. He summarized this concept along with his colleagues in the article Click Chemistry: Diverse Chemical Functions From A Few Good Reactions as,

“Following nature’s lead, we endeavor to generate substances by joining small units together with heteroatom links (C – X – C). The goal is to develop an expanding set of powerful, selective, and modular “blocks” that work reliably in both small- and large-scale applications. We have termed the foundation of this approach “click chemistry”, and have defined a set of stringent criteria that a process must meet to be useful in this context.”

All biomolecules, in principle, have the same structure of linked Carbon atoms. Although these occur naturally, it has been difficult for chemists to synthesize these biomolecules. The reason is that the Carbon atoms of different molecules have to be artificially activated in order to form bonds with each other. These activations usually produce unwanted side reactions and can be extremely expensive. According to the concept of click chemistry, chemists can start with simple molecules already having the Carbon framework and link these simple molecules using bridges of Nitrogen or Oxygen atoms. Sharpless stated that even if click chemistry would not be capable of providing exact duplicates of natural molecules, it would be possible to find molecules that would fulfill the same purposes. Combining simple molecules which has an intrinsic drive to form bonds using simple chemical reactions could avoid any side reactions, would be cost-effective, and can be used to create an endless variety of molecules.

In the aforementioned article published in 2001, Sharpless and his colleagues further explained several criteria that must be fulfilled by a chemical reaction to be called ‘click chemistry’. These criteria are,

“The reaction must be modular, wide in scope, give very high yields, generate only inoffensive byproducts that can be removed by nonchromatographic methods, and be stereospecific (but not necessarily enantioselective). The required process characteristics include simple reaction conditions (ideally, the process should be insensitive to oxygen and water), readily available starting materials and reagents, the use of no solvent or a solvent that is benign (such as water) or easily removed, and simple product isolation. Purification – if required – must be by nonchromatographic methods, such as crystallization or distillation, and the product must be stable under physiological conditions.

It is important to recognize that click reactions achieve their required characteristics by having a high thermodynamic driving force, usually greater than 20 kcal/mol. Such processes proceed rapidly to completion and also tend to be highly selective for a single product: we think of these reactions as being “spring-loaded” for a single trajectory.”

Sharpless, Finn, and Kolb, further listed different types of chemical reactions that could be envisaged as examples of ‘click chemistry’ in the same article, among them was the 1,3 – Dipolar Cycloaddition reactions.

Parallelly, Morten P. Meldal and Christian W. Tornøe were developing methods for finding potential pharmaceutical substances when they unexpectedly discovered the Copper-catalyzed azide-alkyne cycloaddition or CuAAC. Their aim had been to react an alkyne with an acyl halide. The reaction usually happens in the presence of Cu ions and perhaps a pinch of Palladium as catalysts. However, when the products were analyzed it was observed that the alkyne reacted with the wrong end of the acyl halide, which carried an azide group. The alkyne and azide had formed a compound called 1,4–disubstituted 1,2,3-triazole or simply a triazole. 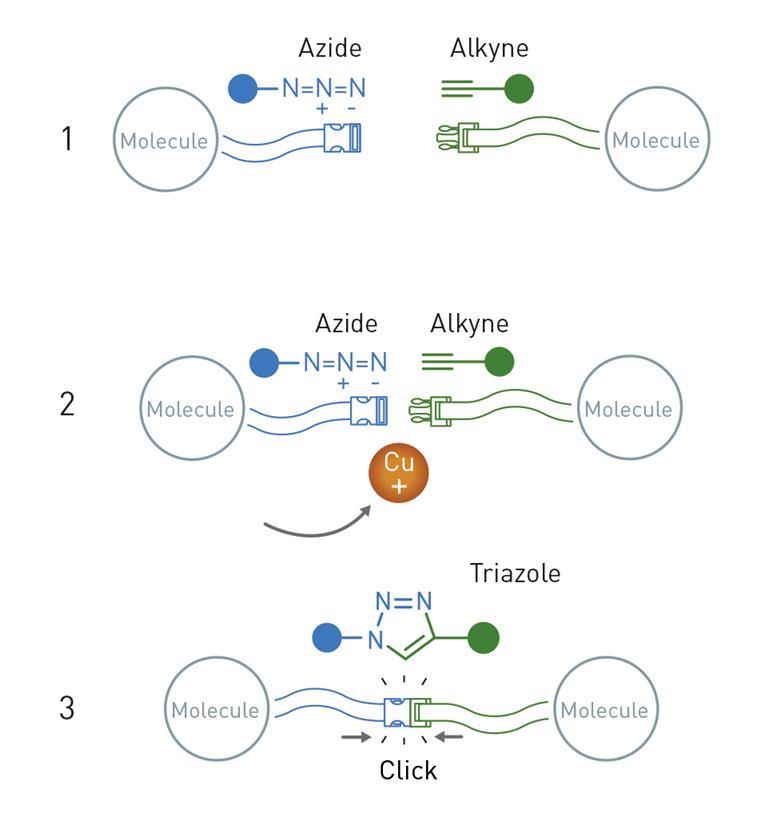 Figure 1: The ‘click’ reaction between an azide and an alkyne to produce a triazole

Triazoles are useful chemical structures. They are stable and are found in pharmaceuticals, agricultural chemicals, and much more. As they are useful structures, some researchers have previously tried synthesizing triazoles by using alkynes and azides. However, these methods were not successful and led to unwanted by-products. The reaction of alkynes and azides in the presence of Cu ions to produce triazoles was therefore an exceptional discovery.

Around the same time, Barry Sharpless with his colleagues Fokin and others – independent of Meldal and Tornøe – was capable of identifying Cu as a catalyst for the 1,3-cycloaddition reaction. The Cu-catalyzed reactions produced high yields, essentially only producing the 1,4-disubstituted 1,2,3-triazole product, and were found to improve the reaction with respect to cost and catalyst purity. The triazole species are mostly inert to many reactive conditions such as oxidation, reduction, and others. It is compatible with a range of different solvents due to its intermediate polarity and as it resembles an amide bond, it can be used to replace them in certain situations.

Scientists started mapping genes and proteins to understand how the cells work by using new methods in molecular biology during the 1990s. However, these new methods could not be utilized to study glycans. Glycans are interesting molecules that are complex carbohydrates built from various types of sugars that are often found on the surface of proteins and cells. The researchers who wanted to understand how glycans function therefore faced an extreme challenge. One of these researchers was Carolyn Bertozzi.

Bertozzi had the brilliant idea of producing an unnatural variant of sialic acid, a type of sugar that build up glycans, which would in turn have a chemical handle, to which a florescent molecule would be attached and the light thus emitted from the florescent molecule would make it possible to map the glycans. The process of finding such a chemical handle was a challenging task as the chemical handle should only be sensitive to the molecule that was to be linked and had to be insensitive to absolutely everything else. That is the handle must not react with any other substances in the cell. Bertozzi established a term for this stating that the reaction between the handle and the florescent molecule had to be bioorthogonal. 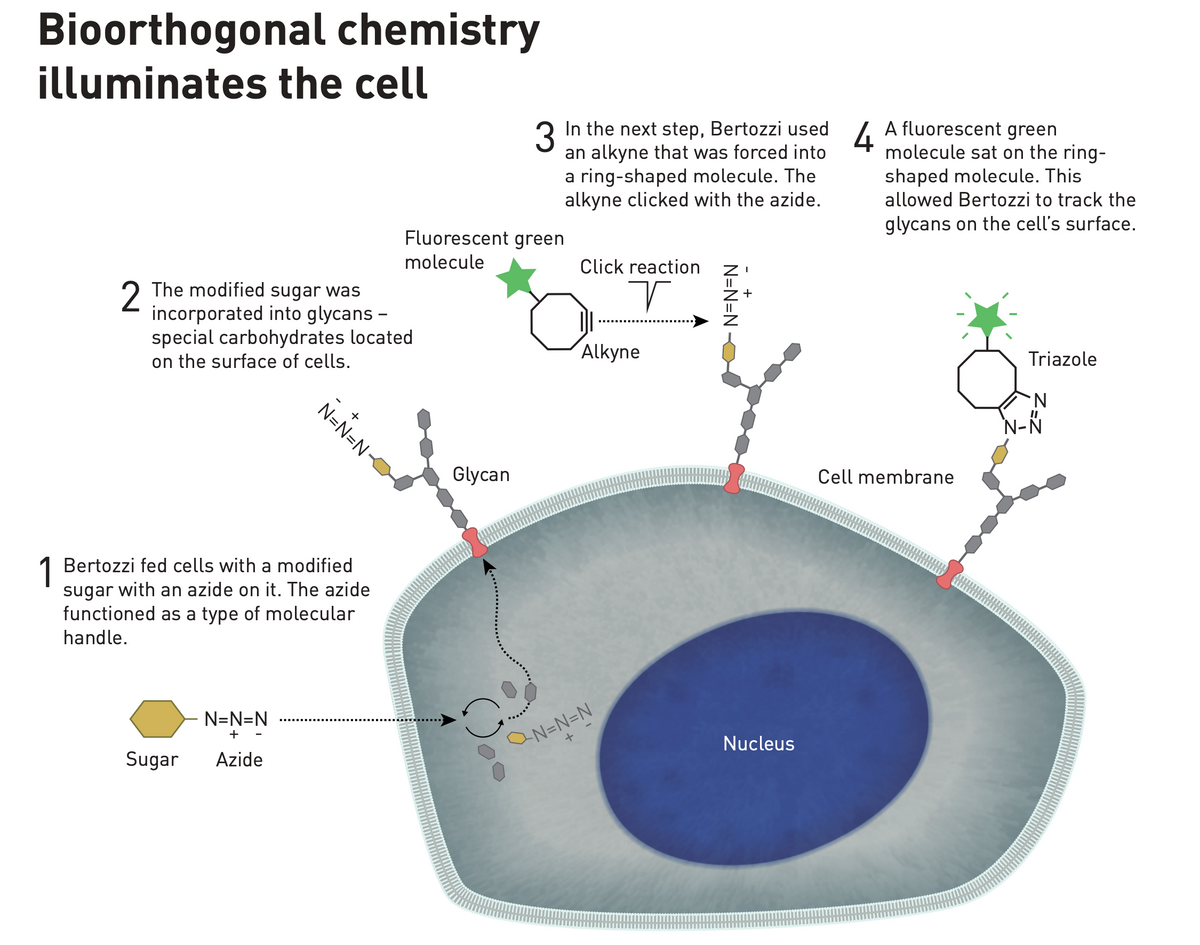 Figure 3: The ‘bioorthogonal’ reaction between an azide and an alkyne which has been forced into a ring-shaped structure

With the increase in interest in click chemistry, Bertozzi realized that these reactions could be used to map glycans. Some issues that she faced when using CuAAC in living cells, are the toxicity of Cu ions to living organisms and the Cu ions acting as catalysts to unwanted reactions inside biological cells. As she searched through the scientific literature, she found that if the alkyne is forced into a ring-shaped chemical structure it can react explosively with an azide. This reaction releases a high amount of energy that the use of a catalyst was not necessary. In 2004, the strain-promoted alkyne azide cycloaddition was published which would open new doors to the field of biochemistry and molecular biology.

Click chemistry and bioorthogonal chemistry are now used in the development of enzyme inhibitors, and pharmaceuticals such as anticancer agents, and photo stabilizers, among many others. It is obvious that since the foundation and development of click chemistry and bioorthogonal chemistry, research has only touched the surface of the potential they hold. Through their interesting concepts and highly efficient methods, the 2022 Nobel Prize laureates have had a groundbreaking impact on our society and will continue to have such an influence for many years to come.