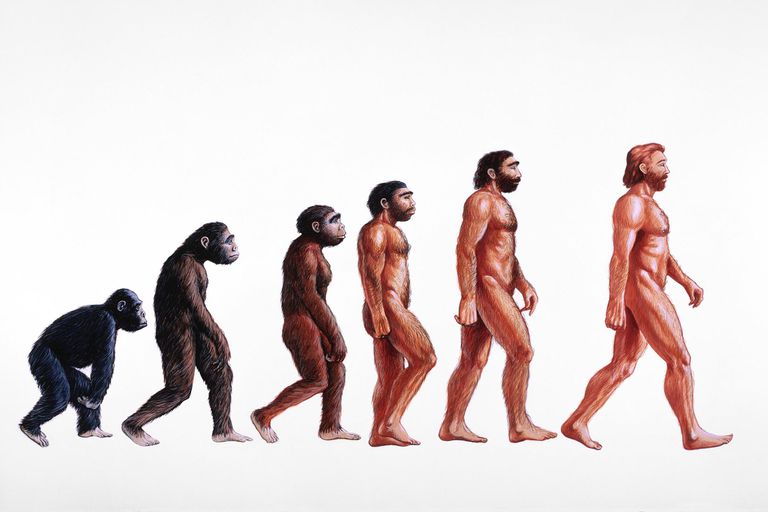 Man has walked through a long-distance in evolutionary pathway to being designated as dominant species on the earth. Many novel anatomical, physiological and behavioral characteristics have developed which caused them to become intelligent and powerful species on the earth. They have spread their power around every ecosystem while controlling them according to their will. Therefore human influence became a major force that interferes with many natural environmental processes. Thus, human evolution is more critical in earth history than any other species evolution.

From the early hominids to modern humans, the way of interacting with the environment has also changed in the evolution process. Early humans did not change the environment much. They easily fulfilled their simple requirements such as food and shelter from the forest. Humans have altered their surroundings according to their requirements with the advancements of anatomical, physiological and behavioral features which facilitated high thinking and analytical capacities, development of technologies and civilization.

Fossil evidence  revealed that human evolution can be divided into four main stages; Australopithecus, Homo habilis, Homo erectus, and Homo sapiens. The four species of hominids had evolved in Africa between 2.4 and 1.6 million years ago. According to the fossil records, the ancestor of the genus Homo is Australopithecus afarensis. Australopithecus means “southern ape”. Although they were upright-walking species, they had some ape-like features as sounds by the name. Especially their shoulder blades had ape like features, indicating that they had spent partially arboreal lifestyle. They had also longer arms for climbing trees.

However, they were the first species had the hominid features. They had a smaller cranial capacity. It was about one-third of modern human cranial capacity. It shows close similarity to the modern ape’s cranial capacity. They lived as herbivores, eating rough plants and vegetables. Some of the experts believe that A. afarensis slept on the trees at night for safety and spent their time close to African lakes and grasslands. A. afarensis lifestyle was very simple and usually associated with forest. Thus they had not caused changes in the environment. They lived with the natural environment as other animals. 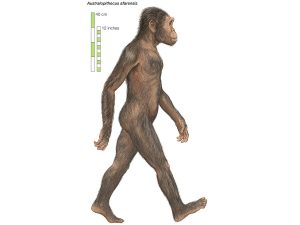 The literal mean of Homo habilis is “hand man”. It was given because of this species was the first maker of stone tools. They had developed bifacial tools by chipping rocks.  Handy man had eaten a broad diet including foods such as woody plants and animal tissues. They obtained meat from dead animals or killed animals by another animal. They preferred scavenging rather than hunting. According to the pieces of evidence found at the Wonderwerk cave in South Africa, Homo habilis was the earliest cave dweller. Their lifestyle was very simple and did not affect the environment largely. 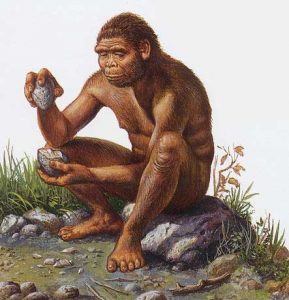 Homo erectus had larger brain capacity and larger body size than Homo habilis which could have been its ancestor. They were taller and leaner species. There was a distinct big shift in human fossil records of an increase in brain size, increasing body size and discovering fossils out of Africa in the period of Homo erectus. Scientists believe that the prominent difference of the fossil records occurred due to the change of their diet more towards the meat meal. Meaty diet provides additional energy than a plant-based diet. They had done hunting and consumed meat largely. As a consequence of increased hunting and meat consumption, they had to move to different places for finding better hunting grounds, even out of Africa.

Homo erectus was the first hominid species that had dispersed out of Africa to Europe and Asia. They also learned to control fire during the early Stone Age. The discovery of fire became very important in human evolution. It facilitated the cooking of plants and animals, providing light and heat and protection from predators. They used fire largely to protect from animals and cold conditions while moving place to place for hunting. It supported them to moving out of Africa. Moreover, fire igniting place became a gathering place for them, resulting in the development of their social behavior.

Tool making technology  became more advance in the Homo erectus period. Their tools showed signs of symmetry, uniformity and well planning. They had different tools for different tasks. They used the Acheulean hand axes  frequently in cutting, butchering tasks and skinning purposes. Using these tools, they had prepared clothes from animal skins also. The first appearance of anything like home bases also being developed in this period.

In the Homo erectus period, alteration of the environment for their benefit became a distinct feature. Increment of hunting with the development of tool technology caused an impact on other animal populations in the environment. The ecological balance between animal populations slightly changed in this period than previously passed stages. The population of  Homo erectus was also increased due to changes in the diet and social behavior, imposing new pressure on the balance of the environment. Sometimes, frequent use of fire was led to occurring forest fires that caused damage to the forest. The spread of hominids out of Africa to the old world opened up new habitats by altering new ecosystems that never had touched previously. Thus, the period of Homo erectus can be identified as the initiation of human dominance on different ecosystems. 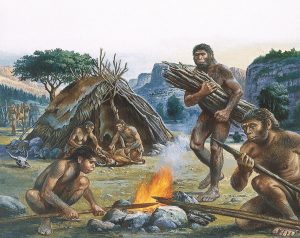 Homo sapiens had evolved from Homo erectus. The emergence of archaic Homo sapiens occurred in Africa 300,000 years ago. Homo sapiens means “wise human”. Larger cranial capacity than other species became a reason for the intelligence of Homo sapiens. Cro–magnon man is commonly used for the modern human that lived in Europe from about 40 000 to 10000 years ago.

They had developed more sophisticated tools than other hominid species such as fine stone blades, grindstones, and Aurignacian tools. They used hooks for fishing and needles for sewing between 90 000 and 12 000 years ago. Lately, they had used barbed harpoons, spear throwers for hunting. Therefore, they had done hunting successfully than other hominids. Homo sapiens initiated shell fishing, fishing, mining and long-distance exchange of materials.

They were the first hominids who had done cave paintings 18000 to 12 000 years ago. It could be a reason for improving brain performance of Homo sapiens.  The earliest members of H. sapiens moved from forest to savanna as they roamed over large areas in search of food and pray items. Then, they had established permanent dwellings as small groups. It indicated the initiation of civilization. After that, they wanted to grow edible crops instead of collecting from the forest. It appeared as the best solution for many difficulties in collecting foods in the wild. Major difficulties were necessity of walking long distance every day for searching foods and collected foods were not sufficient for the whole group. Then the crop domestication was initiated and crops such as wheat, barley were the first crops that were domesticated between 10 000 to 5000 years ago. 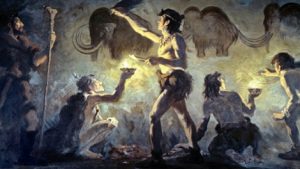 They had altered the environment a lot for their benefits. Crop domestication and animal domestication caused disturbance to natural evolution process due to performing selection according to their desire. Ecological balance of animal populations also changed with the advancement of hunting technologies. They had uncovered forest areas for farming, disturbing to natural ecosystems. They had initiated pottery and mining and started to utilize earth resources according to their wish. Thus, the dominance of H. sapiens has spread all over the earth.

Homo sapience sapiens is a subspecies of Homo sapiens who live on earth today. Agriculture and technologies of tool development has developed explosively in the period of Homo sapiens sapiens. In the 18th century, the agricultural revolution initiated causing the gradual transformation of the traditional agricultural system. After the green revolution, human has stared to use agrochemicals to obtain a good yield. It appeared to be a good solution to supply food for the rapidly increasing human population at that time. Finally, it caused many health issues, water bodies’ pollution with loads of nitrate and phosphates and unbalance of animal populations due to interrupting the food chains. Toxic heavy metals have accumulated top levels of the food chains, causing the death of higher-level consumers. Thus, agrochemicals became a major agent of environmental pollution.

The industrial revolution was a significant event occurred in the 18th to 19th century. The agricultural revolution directly interconnected with the industrial revolution. They developed new technologies to mechanize human activities such as agriculture, handicraft, and cloth production. Many innovations came up such as advanced machines that needed fossil fuel to function. Since then, loads of carbon dioxide and gases have released into the atmosphere, initiating the problem of global warming and air pollution. Large scale development of industries and urbanization became reasons for large scale forest cover reduction, causing environmental impacts such as global warming, unexpected rainfall patterns, severe droughts, and biodiversity degradation. 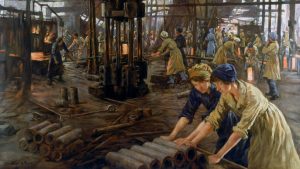 Environment and natural processes have altered significantly due to increased anthropogenic interference in the human evolutionary pathway. With the development of human intelligence, the amount of harm that has done to the environment has increased including over-consumption of earth resources. Therefore, Homo sapiens sapiens has to find solutions for all environmental issues caused by their activities to ensure their future survival and the life of the earth. The direction of human evolution seems to be strongly depending on the success of finding those solutions. Otherwise, the day that all humans wiped out from the earth won’t be so far. Sometimes, it can be the end of the journey of the man. Thus, we all have the responsibility of making a better environment as Homo sapience sapiens for protecting the amazing life of the earth.