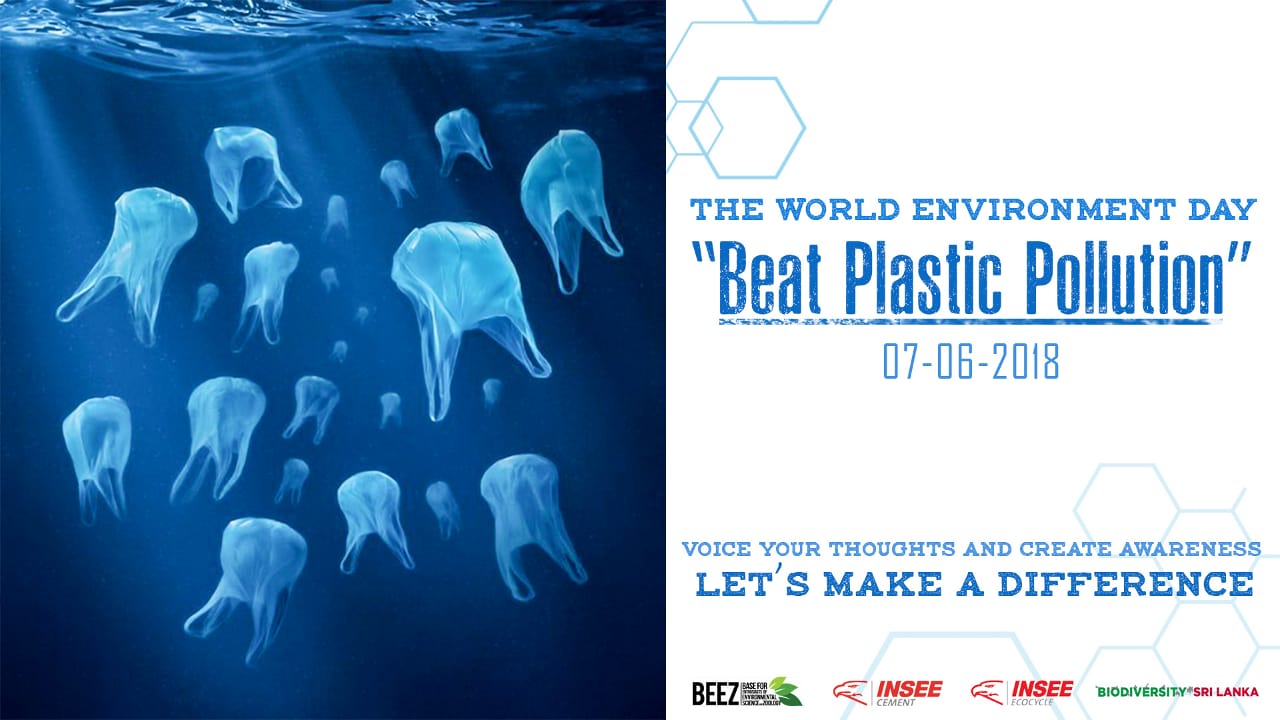 “ We do not inherit our earth from our ancestors, we borrow it from our children.” – Chief Seattle.

Humans have become both creatures and creators of their environment, which gives them nourishment and provides them the opportunity for intellectual and spiritual growth. So far, the tortuous evolution of the human race on this planet has resulted a rapid acceleration of science and technology where the human race has acquired the power to transform their environment in countless ways in an unprecedented scale.

This has eventually resulted many outsized problems, which have become so difficult to grasp in scale and sometimes engendering only a feeling of helplessness.

‘Plastic’ has become one of the greatest environmental challenges of our time. It has become the buzzword of the era simply because of the catastrophy brought upon our wild life, nature and our health.

Thus, to provide a platform for public outreach for this matter, The World Environment day forum 2018 was organized. It was successfully held on the 07th of June 2018 at the Senete hall, University of Colombo with the participation of over 100 individuals representing various organizations.

Taking forward the United Nation’s theme for year 2018, “Beat plastic pollution’’, it was organized by the Biodiversity Sri Lanka (BSL) with Siam City Cement (Lanka) Ltd. (INSEE Cement) and the Base for Enthusiasts of Environment Science and Zoology (BEEZ) of University of Colombo. This forum provided an opportunity to broaden the basis for an enlightened opinion and responsible conduct by individuals and other organizations in conserving and enhancing the environment.

Prof. Lakshman Dissanayake, the Vice Chancellor of University of Colombo was appreciative of the effort put forward by all three parties in creating a platform to alleviate the pressing issue caused by plastic pollution. He specially mentioned about upgrading the University of Colombo to a polythene free environment as an endeavor by the Center for Environmental Initiatives of the University headed by Dr.Erandathie Lokupitiya and appreciated the support given by students in implementing it.

The panel discussion was the fundamental segment in the forum and it was moderated by Mrs. Shiranee Yasarathne, a key figure in promoting environmental and social sustainability in the business sector at all levels.

“As a species we may be using the planet but we have no right to dump waste on the planet and now we have lost our role and gone beyond that.” Professor Emeritus Sarath Kotagama of University of Colombo gave a strong entry to the panel discussion sharing his views on “When will we not produce waste?”. His firm and straightforward notion was an alarm call for all of us in the house to rethink the way of life we are currently leading.

Mr.Sanjeewa Chulakumara, General Manager of INSEE Ecocycle delivered the keynote address of the event. He discussed how they collect waste from companies and process it to generate energy. The fact which was also highlighted was that 40% of coal substitution is made by alternative energy which provides a sustainable waste management solution.

The next speaker Mr.Chinthaka Abeysekara, Chief Executive Officer, Sisili Projects Consortium elaborated his views on recovery of plastics from waste streams and its feasibility for use in industries. He spoke about the numerous initiatives taken to manage clinical and infectious waste.

Mrs.Kanchana Weerakoon, the founder and the president of Eco friendly volunteers spoke next and her perspective on lifestyle changes to tackle the waste issues was very enlightening. Speaking at the event she took us through a wonderful array of simple and easy practices that could be conducted in order to become a zero-waste-producing citizen. She also brought forward ‘Eco brick’ concept to reduce polythene and plastic wastes which is a project lead by her at present.

The opportunity given to university students to be a part of the panel discussion pave the way to voice the thoughts of future environment activists. Thus, there were two student representatives from two leading universities of Sri Lanka as panelists.

Ms.Dinithi Hemachandra, one of them, is an undergraduate of the University of Colombo, currently following a special degree in Environmental Science. She spoke on the importance of changing our mindset to get used to responsible consumption and environment friendly practices. She also mentioned about the measures taken by University of Colombo resulting a significant reduction in polythene waste.

The panel discussion concluded with the remarks made by the final panelist Mr.Hiroshan Weerawardana from Department of Integrated Design, University of Moratuwa whose mission is to find solutions for the waste issue from a designer perspective. As he mentioned, the solution for this crisis does not start from the garbage dump and the issue should be considered while manufacturing to the declining stage of every product. As he eloquently said, it would be much easier to manage waste by creating it for another purpose; utilizing it as a resource.

From the beginning of May to the end of the event, a lot of effort, time and dedication of many spirited undergraduates were behind the accomplishment of the forum. All the students along with the organizing committee were seen to be working all through the day followed by many sleepless nights to make it a memorable event.

This project commenced under the leadership of Ramalka Kasige; the Project Manager from University of Colombo. The constant support and guidance given by Dr.Inoka Perera, senior treasurer of BEEZ, Dr.Erandathie Lokupitiya, Prof.Wipula Yapa, all the academic staff members and the past members of BEEZ was remarkable.

As the official media partner of this event, FoS media crew was eagerly behind the whole of publicity and media coverage processes, working hard to bring the action and updates of this most anticipated event of the month. Together WED forum 2018 was completed as an event of unprecedented grandeur. The event ended on a positive note with a lot being discussed about the necessity to protect our environment and what we can do as individuals. Sometimes words aren’t enough when it comes to plastic pollution; more or less being the change you want to see in the world is the best way to create a positive notion.

Fighting against plastic pollution doesn’t start with refusing plastic; it starts with a change in consciousness. This change allows us to recognize that with every choice we make, we are voting either for or against the kind of world we wish to see.

Tomorrow is a new day and let’s join our hands to ‘Beat Plastic Pollution’ and walk towards a greener tomorrow .