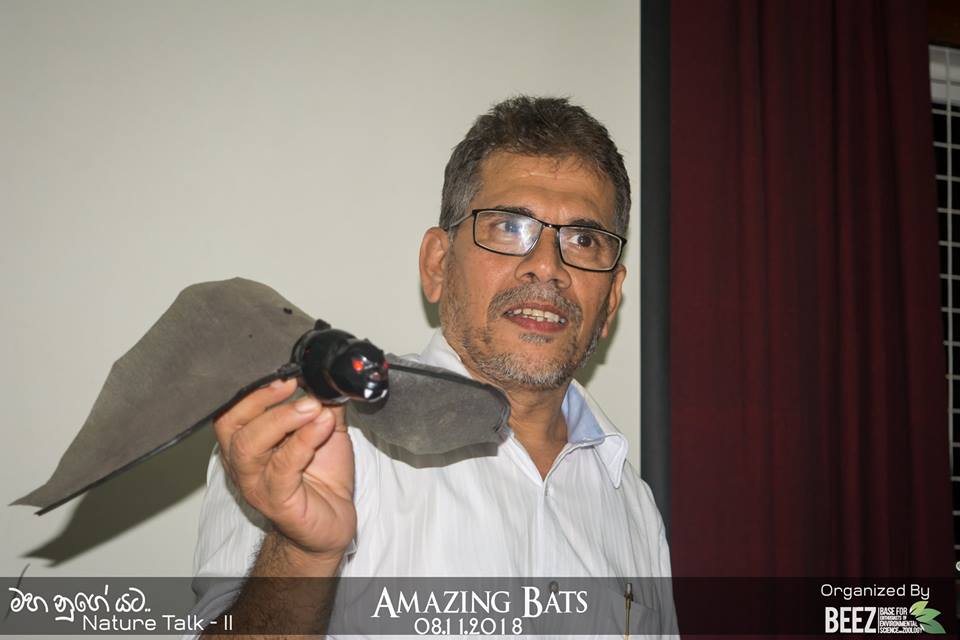 It was another precious evening. Everyone of us in the BEEZ were getting ready for another session on the Nature Talk series with one of the great personalities in the department of Zoology and Environment Sciences. The evening was spent with a personality well known as a BAT lover and a BAT specialist. He is Prof. Wipula Yapa, the former head of the Department of Zoology and Environment Sciences. The audience was eagerly waiting to hear about these amazing creatures. According to him, it was the very first general talk at the department. BEEZ felt much proud on inviting him to this moment.

Prof. Wipula Yapa had started studies on BATs over 30 years ago. He has conducted many researches on breeding habits, roosting ecology, migration, social behavior and pathogens of BATs; simply on the entire ecology of these cryptic creatures. As he said, BATs are a charismatic group of animals. They bear several unique features in their anatomy, physiology and social behavior. These features make them more success. But unfortunately myths and misconceptions on BATs makes them more horrible, unwanted, weird flying creatures.

BATs are mammals but with more different mode of living. They move with hands, see the world with ears and sleep and rest by hanging upside down on trees. They could bend their legs in forward direction where none of the other mammals could do so. BATs have become a successful group of animals mainly due to two specializations; Flight and Echolocation.

BATs are the only mammal possessing powered flying. They owns very characteristic thin skin over the elongate digits, known as the patagium. Patagium is more maneuverable than bird wings as they could alter the span of digits. It is a live membrane which it cost lot of energy during the flight.

By using echolocation signals, they detect minute objects, distance and disturbances as they fly in the thick darkness. The food preference in BATs is highly diverse. They feed in fruits, insects, ground dwelling animals, fish and blood. Plant eating BATs are wise enough to drop-down the pulp after sucking-up the juice to maintain their bodies light weighted.

Vampire BATs who feed on blood of warm blooded animals are much more interesting due to several reasons. They possess sucking groves on the tongue which direct the blood in to the oral cavity  once they place the tongue on a bleeding incision. Anticoagulants in their saliva facilitate them to feed for more time with no clot formation. Their kidneys get highly activated after feeding on blood to excrete excess water in sucked blood. Later they attain the normal rate in order to conserve water. This happens to maintain their bodies light-weighted and to get ease in flying. Vampire BATs are altruistic, that is rare to see in the animal world. They regurgitate sucked-blood for the hungry fellows who have not received a good blood meal.

The breeding strategies of BATs are much wondrous. BAT mothers are more responsible on their pups as same as our mothers do. They annually give birth to a single pup which is again related to the maintenance of a light-weighted body. They show parental care to the maximum. Some carry their pup with them during foraging despite of the uneasiness during flying. Some species gather all pups to form a nursery inside a cave and leave for foraging. Mothers have the ability to detect her own pup out of the hundreds of pups which appear similar to us. They use unique sound and smell in this task. BATs who forage for longer distances carry their pups with them. They leave pups at a nearby tree and feed them time to time while they are foraging.

Social behavior of BATs is yet another interesting fact. Thousands to millions of them gather together in a single roosting habitat. This is hard to see among the mammals. BATs usually do not make nests. But some species make tents which are very characteristic to them. Cynopterus is the only genus in Sri Lanka who make tents. They modify Palm leaves as tents. Once the male creates the tent, several females get attract to it forming a harem. Honduran white BAT (Ectophylla alba) is another tent making species, who make tents from banana leaves.

BATs are a keystone species who are essential to maintain the ecological balance with a unique and crucial role.  These are major pollinators for many commercial and non-commercial crops. But they have a bad name as ‘Pests’. BATs do a greater job in seed dispersal. Insectivorous BATs serve as insect traps where they feed on hundreds of insects per night. But still some species are vectors in viral diseases such as Ebola and SARS.

Sadly at present, populations of BATs are rapidly decreasing due to loss of habitats, increasing human pressure, climate change, diseases and deforestation. Use of bio-accumulating insecticides indirectly harm on their survival.

At the end of the session, the audience realized that BATs are not just a cryptic, mysterious group of animals. They are highly advanced mammals with a unique anatomy, diverse food habits, assigned with important ecological functions. They are Amazing, Advanced and more successful than we ever thought. Thanks to Prof. Yapa, we got to know these facts. ‘BATs came before us, Give space for them!’ was the take-home message given to us.