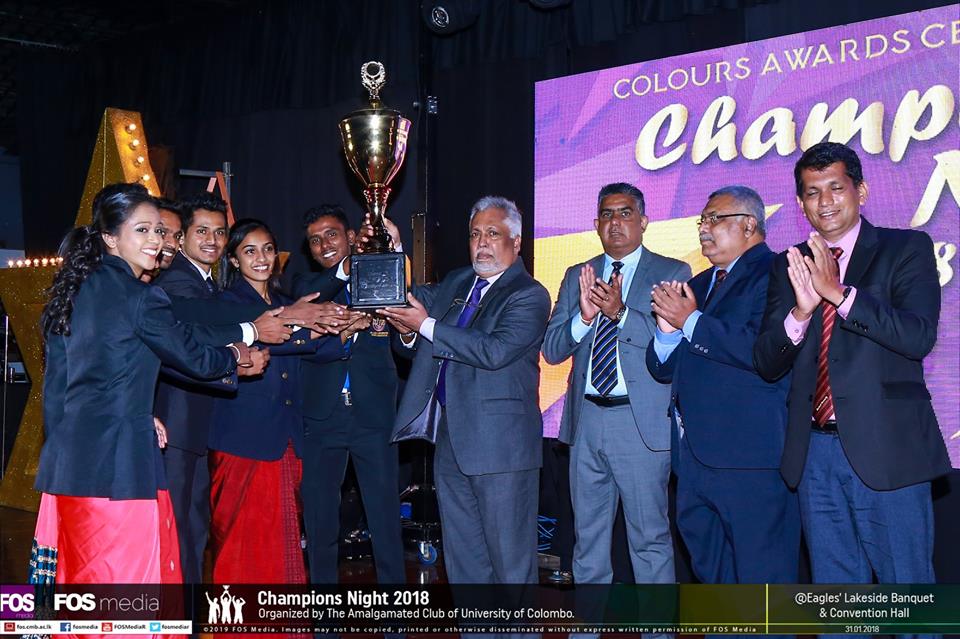 The flags of resplendence were once again high up affirming the glory of University of Colombo (UOC) as the red carpets led to the Eagles’ Lakeside Banquet & Convention Hall to crown the sportsmen and women of the year 2018 with honour for their exceptional performance in sports. With the premiership of Amalgamated Club and Department of Physical Education of UOC the ‘Colours Night of 2018’ took place on the 31st of January 2019 as a glamorous evening of recognizing the talents and determination manifested by the young vibrant undergraduates in uplifting mother UOC to the crest.

The year 2018 in particular, was a remarkable journey for sportsmen and women of UOC as they have been able to secure the overall – lnter University Championship with overall Womens’ championship and overall men runners up, which a great achievement after 4 years. Thus, this colours night is named as ‘Champions’ Night’. 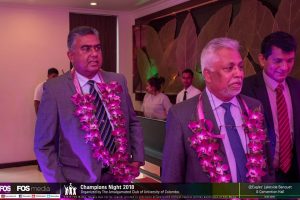 As a mean of appreciating the untiring efforts set forth in promoting sports, Prof Lakshman Dissanayake; the Vice Chancellor of University of Colombo was invited as the chief guest of the event and Mr Asanka Gurusinha, Chief Cricket Operations officer and a former Sri Lankan Test Cricketer was the special guest of this glamorous evening.

“The main purpose behind motivating undergraduates for taking part in a sport is to produce well-shaped, skillful graduates who are both physically and mentally fit to make the world a better place” shared Prof Dissanayake.

“Students involved in sports hone their ability to manage their time effectively, learn to work towards a common goal and push their own limits beyond their perceived capabilities. These are not only useful for a rounded undergraduate but will also provide graduates an edge over others in the job market” highlighted Mr Asanka Gurusinha at the event.

The stage of the Colours Night was not only adorned with countless awardees but also by entertainment performances of dance and singing by the very own talanted UOC undergrads.

“Throughout the years, Amalgamated Club has been a place where the essence of sports and thrills of victory combine to form a pleasing aura. Thus, UOC takes the glory in being the champions at university level by having talented, determined and exceptional young sportsmen and women. So, Colours Night is also one of the many tales of University of Colombo’s glorious past” finally shared Anuruddha Jayasena, president of Amalgamated Club of UOC.

Special Thank you was extended to Prof Lakshman Dissanayake; Vice Chancellor of UOC, Mr. K.A.S.Edward; the Registrar, Mrs. K.S.T.S Jayasooriya; the Bursar, Prof K.R.R. Mahanama; Chairman of the Sports Advisory Board, Mr. Ajantha Dahanayake; Acting director – Physical Education, all the instructors in the Department of Physical Education and club members for their unstinted support and guidance.

Heartiest congratulations to all the colours awardees as we look forward to see the same level sportsmanship in the years to come.