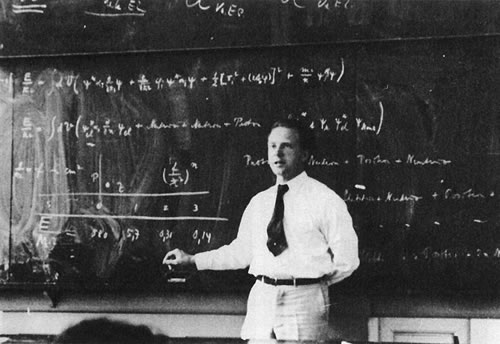 Werner Heisenberg (1901-1976) is well known in the scientific world as the man behind the Uncertainty Principle. Born in Würzburg, Germany, Heisenberg was the son of a Professor of Greek studies at the University of Munich. From birth, he seemed to be destined to become a concert pianist but later on, developed a liking towards science. Werner Heisenberg finally earned his PhD in 1923 from the University of Munich despite all the commotion due to World War 1.

He went on to study atomic theory and in 1932, he won the Nobel Prize for Physics with a reputation as possibly the world’s greatest atomic physicist. Meanwhile, a new power was brewing. Adolf Hitler was steering Germany towards another world war. The Nazis started taking over Germany and murdering Jews. Heisenberg was pegged a Jewish sympathizer for his adherence to the “Jewish physics” of Albert Einstein and Niels Bohr. He was hauled into the Gestapo headquarters for questioning and soon after was recruited by the Nazis to help them build an atomic bomb. Heisenberg was made director of Germany’s nuclear fission research project and he, along with the 60 scientists working under him, called themselves ‘The Uranverein’ or ‘The Uranium Club’ named after the U-235 isotope which is the key element in nuclear fission reactions. For some reason, all the attempts of the top notch German scientists were invain. The German atomic bomb was a failure!

There is much controversy on the fact that Germany, having invented most of the “State of the Art” miliary equipment decades ahead of its time, failed miserably to build an atomic bomb. The atomic bomb, if materialized, would have brought about a turning point in the war leading to Germany’s victory, triumph of Hitler and a world of dictatorship.

So what went wrong? Historians have come up with two theories.
The first being that Heisenberg deliberately sabotaged the project to slow their pace and keep the atom bomb away from Hitler’s hands. There is evidence of a trip he took to Copenhagen in September of 1941 to meet with his friend, fellow physicist and former mentor, Niels Bohr. Heisenberg said the meeting was a diplomatic mission disguising his attempt to leak classified information on Germany’s nuclear project in the form of a secret sketch of a German nuclear weapon. Another reason for failure of the nuclear reactor was the use of heavy water(D2O) as the moderator instead of light water(H2O).
It is thought to be impossible that an intelligent man like Heisenberg would purposely choose heavy water as a moderator over the other available options. Nevertheless, heavy water was chosen, and the Allies caused a gigantic setback in 1943 by bombing the Nazis’ heavy water plant in Norway during “Operation Shark.”

The second theory suggests that Heisenberg could not perfectly understand the theory behind atomic physics and just could not succeed in building such a meticulous piece of technology. With the defeat of Hitler, many of the German scientists were incarcerated and brought to Farm Hall in England where they were interrogated. The Allies made Heisenberg aware of the atomic explosion at Hiroshima and he was initially amazed at the success of the Allies program. Heisenberg then came up with an estimate of how much Uranium-235 would be needed to create an atomic bomb. The value was way too high than necessary. It is from this miscalculation that many experts have formed the opinion that Heisenberg did not really understand how an atomic bomb would work.

What Heisenberg’s real intentions were, still remains a mystery!