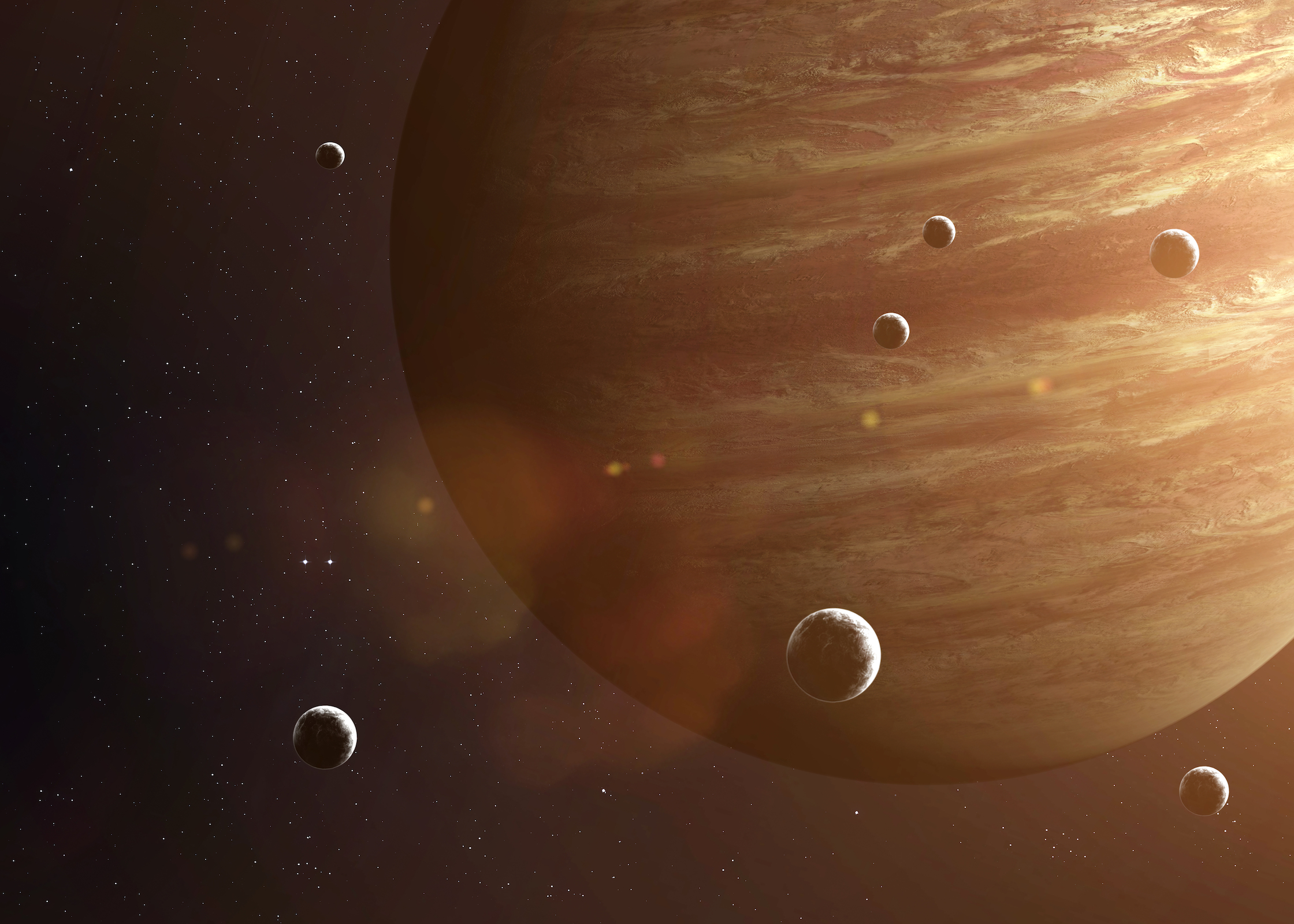 Saturn, being the king of titans in roman mythology, moons of Saturn are named after the Titan kind. Saturn is the planet with the most moons discovered so far. 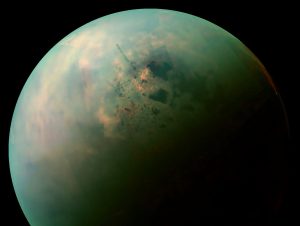 Titan is the largest moon of Saturn and the second-largest moon in the solar system. It has an orange hue when viewed from the space. The most interesting thing about Titan is that it’s the only moon with a significant atmosphere. An Atmosphere 30% denser than Earth’s atmosphere is possessed by Titan. This atmosphere largely consists of Nitrogen similar to Earth’s atmosphere. Methane, Ammonia, and complex organic compounds like ethane are also major components in this atmosphere. Titan resembles primordial Earth in many ways. Titan is the only known object in the solar system besides Earth which has standing liquid on the surface and a cycle of liquid rain and evaporation. However, these liquid pools are made of liquid methane instead of water and the cycle that follows is also a methane cycle. Scientists have even found evidence of waves forming in these liquid methane pools. The presence of oceans under Titan’s surface has been found by indirect methods of gravitational mapping.

Even more, interestingly, Titan is the only moon other than our own, which has been landed upon. To calculate atmospheric behavior and temperature variations in Titan, The Huygens probe of Cassini spacecraft was landed on Titan in 2005.

In addition to Titan Saturn has a family of smaller moons. 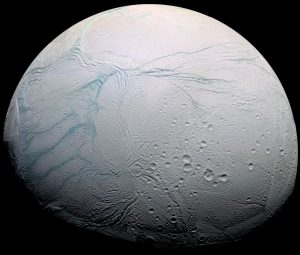 Enceladus is also a very interesting moon. Similar to Europa of Jupiter, Enceladus is also made up of water-ice crust floating on liquid water. Scientists have estimated the crust to be 30-40km and the oceans to be 10km deep. Enceladus is a geologically active moon. Its surface is active with Cryovolcanism. This is similar to terrestrial volcanism but instead of molten rocks, low-temperature liquids such as water and hydrogen are erupted out of icy vents. Fine icy particles are made by these eruptions above the Enceladus surface due to low temperatures and are fallen upon the surface. Over millions of years, these accumulations have formed a several-meters thick layer of pure snow on Enceladus. It is estimated that almost 100% of sunlight falls on Enceladus is reflected by this pure white snow coat. This makes Enceladus the object with the highest albedo (0.99) in our solar system. Enceladus is in an orbital resonance with the moon Dione. Each time Dione orbits Saturn once, Enceladus orbits twice. Scientists have found that the unusual geological activeness of Enceladus is a cause of the tidal force originated by the gravity of Dione and Saturn itself. However, scientists are unable to explain why Mimas, a neighboring moon of about the same size but closer to Saturn appears to be geologically dead even though it is also subjected to tidal heating.

Mimas of Saturn has a huge crater on its surfaces spanning more than one-third of its surface area. This crater is named Hershel. Mimas also facilitates the formation of the Cassini division, which is the largest gap in Saturn’s belts.

Moon Iapetus of Saturn is said to be two-faced. It has a distinct dark hemisphere and a bright hemisphere. Since the dark hemisphere is the hemisphere always facing the orbit, scientists assume that the darkness might have been caused by sweeping of Saturn’s ring materials. Iapetus has an equatorial ridge on its surface. Only Iapetus has this feature in the entire solar system. This ridge is measured to span across half the moons circumference and might be high as 20km at some places.

Phoebe, the largest of Saturn’s irregular satellites has a retrograde orbit. Which means it orbits in the opposite direction of the planet’s rotation.

Hyperion is another large irregular satellite of Saturn. It is so heavily cratered that it appears to have a spongy appearance. Hyperion crosses Saturn’s magnetosphere in a chaotic orbit which seems to have left the moon with some electrical charge. 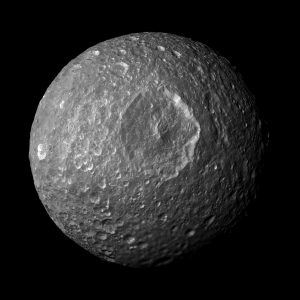 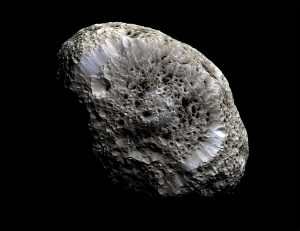 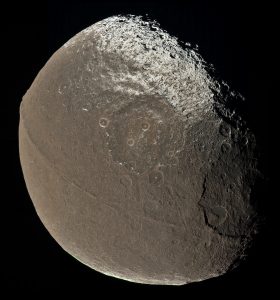 Moons of Uranus and Neptune

Uranus has five large moons. From outermost to inward these are Oberon, Titania, Umbriel, Ariel, and Miranda. The names Umbriel and Ariel are names from Alexander Pope’s The Rape of the Lock, and the rest are from Shakespeare’s A Midsummer Night’s Dream and The Tempest. Which means these moons are not named after any mythical character. Titania is the largest moon of Uranus. All these moons are relatively darker than Saturn’s moons and are tidally locked with Uranus. Most of Uranus’s moons are considered to be geologically dead but some moons show evidence of past geological activity. No large craters appear on Titania even though its surface is heavily cratered. Suggesting that it may have gone a face of geological activity during which the craters were filled with ice. Ariel has faults in its surface that might be 10km deep in some places suggesting movements of plate tectonics.  Tidal heating caused by orbital resonances with Miranda and Umbriel might have resulted in this geological activity in Ariel.

Neptune, being the Roman god of oceans, most moons of Neptune are named after mythical deities related to water and oceans.

Triton is the largest moon of Neptune. It has some unusual characters being a moon for a planet like Neptune. Triton is unusually large. Its orbit is a retrograde orbit making it the only large moon to have a retrograde orbit. The orbit also happens to have an unusual inclination of more than 900 respective to the equator of Neptune.  It is believed that it is a captured object from space. Triton orbits in the most circular orbit posses by any moon in the solar system. Triton shows evidence of cryovolcanism. Its surface is covered with several types of ices made of carbon dioxide, carbon monoxide, and methane.

In contrary to Triton, Nereid of Neptune has the most elliptical orbit of any moon in the solar system orbiting in a prograde direction. Nereid takes 360 days to complete one revolution around Neptune.

Neptune possesses the furthest moons from a planet in the solar system.

Moons of Dwarf Planets and Asteroids. 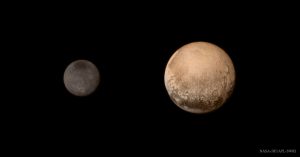 One of the most popular moons of a dwarf planet is Charon of Pluto. Charon is half as large as Pluto. Pluto-Charon system is the only system of objects which are tidally locked with each other. Note that previous moons were locked with its planet but the planet wasn’t locked with the moons and it has its own pattern of rotation. While other tidally locked moons always had one hemisphere facing their planet Pluto and Charon each have one hemisphere that always faces the other body and another hemisphere that never faces the other body. Both objects are in orbital resonance in retrograde orbits.

All the moos of Pluto including Styx, Nix, Kerberos, and Hydra have the names of mythical deities related to the underworld.

The dwarf planet Eris has a moon named Dysnomia which is the second-largest moon orbiting a dwarf planet. Dwarf planet Haumea has two moons covered with ice named Hi’iaka and Namaka.

At least 200 Asteroids in the main asteroid belt are believed to have their own moons. One of the most popular moons is Dactyl of asteroid Ida.

Even Kuiper belt objects are believed to have moons like asteroids and it is believed that at least one possesses three moons. 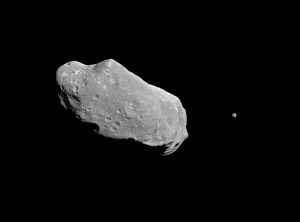 Even though there are many more moons in our solar system, the above description was only about a few of them. Even more interesting things are waiting to be unveiled by future explorations.