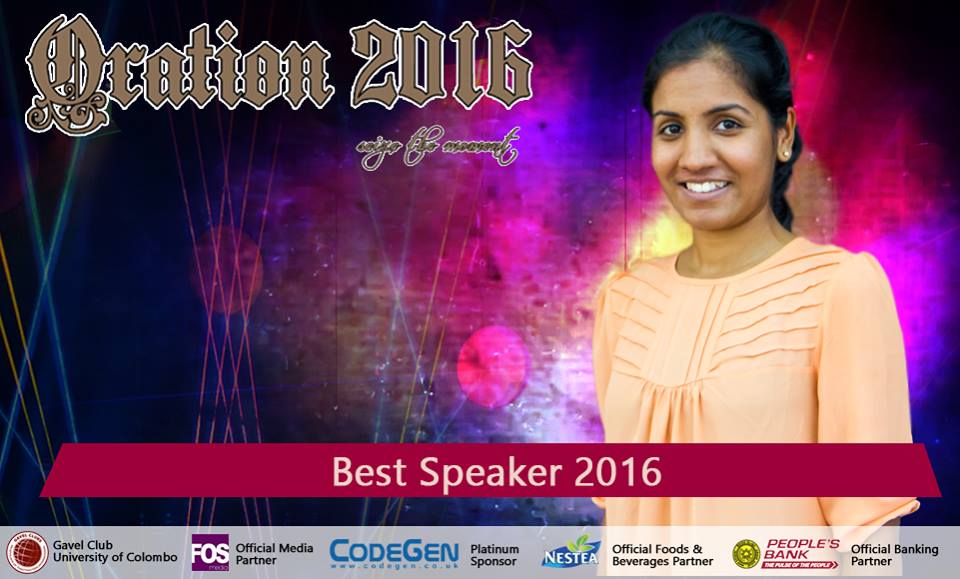 Oration 2016, the Intra University event that caught the attention of many, came to a close on 17th march 2016 at the University of Colombo. The search for Best Speaker was a project organized by the Gavel Club, affiliation of toastmasters USA with the media partnership of FOSMedia, the official media unit of the faculty of Science, in the hope of bringing a brand new experience to all undergraduates.

The Grand Finale was held in the New Arts Theatre of the University of Colombo from 4.00pm onward in the presence of the chief guest, Dr. Harsha Subasinghe, Founder and CEO of Codegen, the honored invitees, many cheerers and supporters from all faculties.

And it was truly a happening of a lifetime. After a long and much exciting journey in the competition Charuni Pathmeswaran of the faculty of Science emerged as the Intra University Best Speaker, while Senuri Suriaarachchi from the faculty of Finance and Management earned the title of the Most Popular Speaker in Oration 2016.

Over one hundred participants registered for the competition, and after preliminary level and the semifinals, only five outstanding speakers were chosen to move to the finals. While the faculty of Science offered two contestants, only one from each of the faculties of Finance and Management, Law and the UCSC competed on the last phase of Oration 2016. Charuni Pathmeswaran and Shenali Fernando, our own two heroines are not unfamiliar characters for anyone in the faculty as well as the whole of university. For the moment let’s just say that they never fail to make us proud.

Besides being the lucky girl brought under the limelight by Oration 2016, Charuni Pathmeswaran is well known for the amazing writer and blogger and the talented pioneering Gavel member she is. Her written works published in the official students’ blog of the faculty of Science, receive the love of the readers of all times. Her triumph as the Best Speaker is the attestation to the brilliant mind and the disciplined spirit she has.

“Undecided”, the speech that brought victory and won the hearts of all who listened, unveiled a lot of personal experiences of Charuni’s life. She spoke of how most things were and are undecided for her, how she had moved on with what she had at the time and how far she had come with so much still undecided. The truth in her words and the pureness of her thoughts were felt to the very soul of all youth, and the way she presented it with modesty and so much ease, captivated the audience like no other. Not a single word she uttered and not a single twinge of a muscle betrayed her of the sincerity she delivered. And there can be no doubt, that all who were there at Oration 2016 witnessed on that stage, what a great speaker lives inside of her.

The Most Popular Speaker award was based on the sms votes cast in the past week. After much enthusiasm in the voting sessions, all were excited to know who the winner would be. And the title was received by Senuri Suriaarachchi, the competitor from the faculty of Finance and Management who also displayed a lot of talent throughout the competition.

From the beginnings in late January to the end of the event, a lot of effort, time and dedication of many spirited youth were behind the perfection of the Oration. The members of the Gavel club were seen to be working all through the day and many sleepless nights to make it a moment to remember. The FOSMedia crew was eagerly behind the whole of publicity and media coverage processes, working hard to bring the action and updates of this most anticipated event of the month. And together Oration 2016 was completed with success written all over it.

Heartiest congratulations go to both winners and all participants. It is a fact that they indeed ‘seized the moment’ to shine and earn the glory. With great expectations we will wait for the Gavel club to come up with yet another experience as enthusing as Oration 2016, for ‘Gavel never stops’.