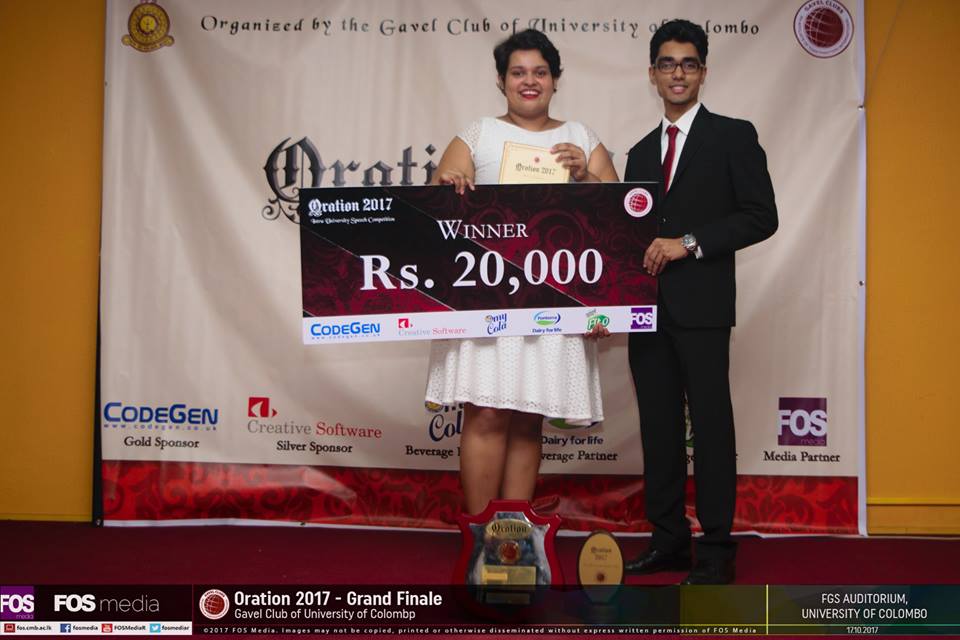 “The talent is abundance. When charisma, humbleness, dedication and commitment are added to it one can arrive at an exclusive echelon of an oratory excellence.”

The climax of a grand oratory extravaganza for UOC undergraduates marked it’s finale at Faculty of Graduate Studies Auditorium of University of Colombo on the 17th October 2017. It’s the completion of another milestone of Gavel UOC history.

“Oration 2017”, the Annual Intra University Best Speaker Competition, is one of the most eagerly anticipated events of the Gavel Club of University of Colombo which is organized with the sole intention of enhancing the communication skills and leadership skills among undergraduates.

The battle began on the 30th of September 2017, under the tagline of “Seize the moment”. Enthusiastic contestants from all faculties participated in the prelims and out of them, twenty best speakers were selected for the semifinals after presenting a 4-6 minute prepared speech of their own choice.

After a thorough and difficult evaluation of equally competitive prepared speeches, six best outstanding orators were selected for the Grand Finale by a panel of eminent judges who are active Toastmasters in Sri Lanka.

While displaying the power of endurance and undaunted courage, Chiranthi Senanayake of Faculty of Arts grabbed the prestigious title “Intra University Best Speaker-2017”.

Her speech carried the core message about the importance of not casting judgments on others on the simple basis that others are different from one’s own self. An acceptance of humanity as one population devoid of difference leads to us not validating other people and intern not being validated. She argued that diversity must simply be embraced because each and every one of us is unique. She took this message forward by using her personal experience with great focus on her “Kandiyan Govigama Buddhist” inheritance to which she drew an analogy of “KGB” factor.

She captivated the audience like no other, unraveling the great speaker that lives inside her.

The pursuit of the title for the “most popular speaker” created a buzz among the competitors and their supporters. This much sought after title was awarded to Pirannavan Ratnasingam of Faculty of Medicine with a bulky number of votes.

The second edition of “Oration 2017” comprised of a panel of judges of renowned Toastmasters led by Toastmaster Arshad Nizam , club mentor of Gavel UOC.

From the beginning of late July to the end of the event, a lot of effort, time and dedication of many spirited gaveliers were behind the accomplishment of Oration. All the gaveliers along with the Organizing Committee were seen to be working all through the day and many sleepless nights to make it a memorable moment.

This mammoth project kicked off under the headship of Malin Ranwala ; Project chair, Oration 2017. The organizing committee was supported by Code Gen International and Creative Software as the sponsors and Fonterra and Elephant House beverages as beverage partners.

The OC was constantly supported not only by the present members. The support given by the past members of the club as well as by the project chair of Oration 2016 & the founder of Oration; Fadil Iqbal, was remarkable.

As the official media partner of this event, FOS Media crew was eagerly behind the whole of publicity and media coverage processes, working hard to bring the action and updates of this most anticipated event of the month. And together Oration 2017 was completed as an event of unprecedented grandeur.

Heartiest congratulations go to both winners and all participants. Their eminent & splendid performance indeed made them Champions.

With great expectations we will wait for the Gavel Club to come up with yet another experience as enthusing as Oration 2017, for ‘Gavel never stops’.?