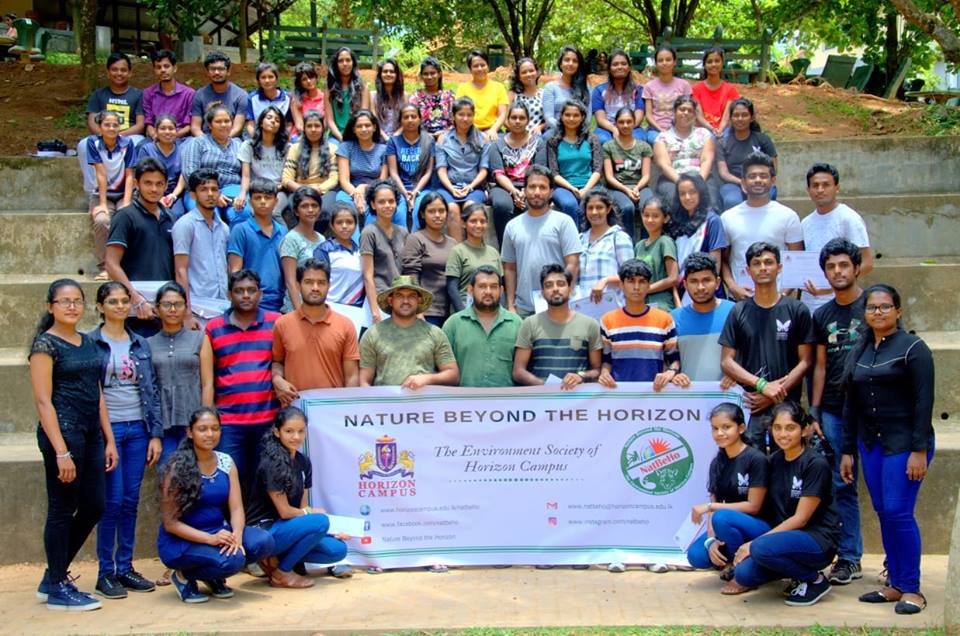 “Once you start watching birds, butterflies or dragonflies, you can’t help but notice how amazing they are…”

Birding, butterflying and dragonflying have long been popular among many nature enthusiasts as well as kids. Some travel to new destinations, even to far off countries, to add more and more species to their life lists. Stunning jewel like colours and the daredevil flight; aren’t they enough reasons for nature enthusiasts to love these wonderful creatures?

It was high time for the excited young animal enthusiasts to gather again for a friendly competition based on their interest and talent on bird, butterfly and dragonfly identification. It’s none other than ‘The Bird, Butterfly and Dragonfly Identification Contest 2018’.

This contest was organized by Nature Beyond the Horizon (NatBeHo) of Horizon Campus, Malabe for the very first time and was successfully held on the 11th of August 2018, marking the completion of another milestone of NatBeHo history.

It was one of the most eagerly anticipated events of the Environment Society of Horizon Campus which was organized with the sole intention of promoting bird, butterfly and dragonfly watching in Malabe area and to increase the public engagement and consciousness in nature conservation while promoting the brand name of NatBeHo.

The contest was not that spick-and-span to the organizing committee and was conducted in the manner where the participating teams would compete with each other by trying to record the highest number of birds, butterfly and dragonfly species in a specified area within given two hours time.

Both undergraduates and school level students competed in this competition under open and school/university categories. They were not professional lepidopterists or trained entomologist but casual observers while some were hard-core enthusiasts. A team comprised of maximum of five members and there was a supervisor given for each team which made the contest more transparent for all of us. The teams were so optimistic that all members had very high spirits of recording species many as possible.

It’s unbelievable that there is such a diversity of faunal biota in the canals and marshes of busy suburbs of Colombo. A breathtaking array of species were present around the Horizon Campus premises and majority of the teams were able to record many of these species. It was a facinating morning, the specified footpaths had enough and more sunlight to activate the flying creatures.

Displaying the power of togetherness and undaunted enthusiasm, Team UoC became the winners of the contest by recording the highest cumulative number of birds, butterfly and dragonfly species, while Team Sky Hunters and Team Odyssey became the runners-up. The team UoC representing the University of Colombo comprised of Ramalka Kasige, Tharindu Krishan, Pavani Perera and Aruni Vimukthi all being Zoology and Plant Science special undergraduates of the Faculty of Science.

The President of NatBeHo; Ashan Karunananda did not forget to share his ideas with us.

“Nature Beyond the Horizon is the first society established in our campus after the Student Council. The Society initially rooted within the Faculty of Science but I’m happy to say that it has now grown and reached the other faculties as well. We organized this contest for the very first time with the intention of encouraging students on active participation of nature activities. The event was of great success and we are hoping to organize similar events in the future as well.”

He further extended his gratitude to the patron & advisor of NatBeHo, Senior lecturer; Mr. Medhisha Gunawardena, the senior treasurer, senior lecturer; Mr. Eranda Mandawala, the staff co-ordinator; Ms. Kumuduni Jayatillake and the NatBeHo team for all the support and guidance given all times to make the event a successful one.

As the Official Media unit of Faculty of Science, we never forget to bring you the success stories of the venturesome budding environmentalists in the most esteemed University of the nation.

Heartiest congratulations go to our winners as well as the runners up teams and all the participants. It is a fact that their exuberance and intimacy made them shine and earn the glory. As we congratulate the winners, we wish them the best of luck for their future and we hope they would keep making UoC proud!

All in all, the “Bird, Butterfly and Dragonfly Identification Contest 2018” was completed as an event of unprecedented grandeur. With great expectations we will wait for the ‘Nature Beyond the Horizon’ to come up with yet another experience as enthusing this contest, while continuing to explore “beyond the horizon”, both literally and figuratively.