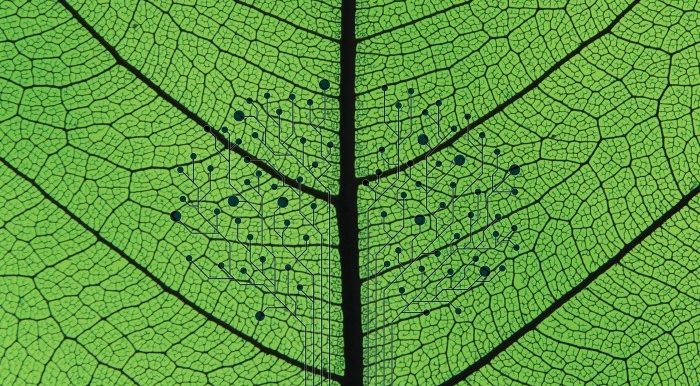 Do you believe the fact that 10 to 15 drinking water bottles can power up your house for 2 days? The Harvard Professor, Daniel Nocera said that the Chemistry of plants is the most likely place to find a solution for the long term energy crisis. Sunlight plus water can give H2 and O2 with one of nature’s gifts in between, which is the leaf. Things get interesting when this process can be done, with almost the same principle using the Artificial Leaf.

The artificial leaf is a combination of a silicon solar cell sandwiched between two different catalytic materials. When the artificial leaf is placed within a container of water, upon exposure of sunlight, it generates oxygen and hydrogen bubbles from either side. With a barrier to separate the two sides, the two-streams of gases can be collected and stored which can be later fed to a fuel cell that can combine these gases to form water while giving out an electric current.

When the bonds of split water are re-arranged we can obtain H2 and O2 which are high energy fuels. We are all familiar with the general equation of photosynthesis.

But plants do not use sunlight to make carbohydrates. It uses sunlight to split water into hydrogen and oxygen which is the endothermic reaction. Once the Hydrogen is formed, it combines with Carbon dioxide in the dark.

Electrons are wave-like and spread out readily. How fast an electron can move is the overlap between the wave functions (Ψe–). The wave function of a proton (ΨH+) for the same distance hardly overlaps with each other. Proton has a mass of about 2000 times greater than that of an electron. Hence the proton is much less of a quantum mechanical object than the electron. The problem arises since the protons can’t keep up with the electrons because electrons are really fast compared to that of the protons.

The Proton-coupled electron transfer (PCET) is an important mechanism where coupled transfer of electrons and protons leads to electric-charge transport in a variety of biochemical, electrochemical, small molecules of organic and inorganic reactions. Daniel Nocera explains this creatively.

Imagine a race between a proton and an electron. If they both start at the starting line, it is obvious that the electron will have the winning run. So how can the proton and the electron both win at the same time? If the proton starts the race near to the finishing line, when the gun goes off, this can be achieved.

When explaining PCET at a mechanistic level, the firing of the gun triggers the race. But, the electron has to go through a greater length whereas the proton has to travel a small distance.

PCET at a Mechanistic Level

PCET is initiated by photons, (photoinitiation) between the donor “D” and the acceptor “A” placed close together by hydrogen bonds.

The movement of H+, (proton) from the amidinium towards the carboxylate may accompany the transfer of an electron from D to A.

From these measurements, a PCET Theory was developed establishing the guidelines for the design of 4e– l 4H+ water splitting catalysis.

It turns out in nature, the active sites within a leaf knows how to heal itself and that’s something that nature does well. If a catalyst deactivates, we have to reactivate it before the chemical reaction starts. The chemical activation step of the catalyst is energetically inserted into the reaction itself as an equilibrium.

The metal Cobalt forms a thin film on its surface when a voltage is given while it is immersed in water. This thin film is made with clusters of Cobalt and Oxygen.

This could self heal, fix itself in real-time.

The blue line represents how Oxygen is produced. The Red lines show how the self-assembly of catalyst takes place. Considering pH 7, we need a voltage of about 1.2 V to split water. But to reassemble the catalyst, only a volt is needed. Even though the catalyst falls apart it can be taken back to the electrode which means this catalyst never dies. Now there is a catalyst that splits water into oxygen which is Cobalt Phosphate oxide (CoPi). Similar way, another catalyst to take the leftover protons and electrons to make hydrogen was produced. This is a 3-metal alloy made of Nickel, Molybdenum, and Zinc (NiMoZn) or Co-P(6%) alloy.

Photosynthesis is a Two-Step Process

One of the first clues to the mechanism of photosynthesis came from the discovery that the O2 given off by plants is derived from H2O and not from CO2. The chloroplast splits water into hydrogen and oxygen. The two stages of photosynthesis are known as,

In the light reaction, water is split in the presence of sunlight, providing a source of electrons and protons(H+) and giving off O2 as a by-product. Here NADP+ is reduced to NADPH by adding a pair of electrons along with an H+ ion. ATP has also generated to power the addition of a phosphate group to ADP, in a process called photophosphorylation.

The Calvin cycle begins by incorporating CO2 from the air into the organic molecules already present in the chloroplast in a process called carbon fixation. The Calvin cycle then reduces the fixed carbon to carbohydrate by the addition of electrons. The reducing power is provided by NADPH, which acquired its electrons in the light reactions and also the chemical energy in the form of ATP, which was also generated in the light reaction.

Water splitting is an uphill reaction. So once the water is split, H2 + CO2 can form carbohydrates in a downhill reaction.

The two catalysts are put on either side of the Si part, of the solar panel.

When sunlight hits the Si part of the solar panel, positive charges move in one direction whereas the negative charges move to the other direction. Moving charges are electric currents. Here there are 3 flavors of Si that absorb different levels of wavelength. Thus, the net absorption will be spread out which perfectly matches the solar spectrum so that every photon coming from the sun is captured. When this is immersed in water, oxygen and hydrogen bubbles evolve from either side. With a separator, the gases can be collected into two separate containers. This is the first step of photosynthesis and the artificial leaf does it with much greater efficiency than the leaf itself.

When the sun goes down, the collected gases can be fed into a fuel cell which can generate electricity giving backwater.

1 kg of H2 = 1 gallon of gasoline in terms of energy equivalence.

Genomics led to the understanding of gene sequences. This led to the production of an enzyme called Hydrogenase which can take H2 and separate it to 2 protons and 2 electrons. Genetic engineering led the bacteria called Raistonia eutropha to have Hydrogenase in its membrane. These bacteria die if it doesn’t have H2, hence it needs H2 for its survival. This process can make NADPH and then ATP, powering up the Calvin cycle. This converts acetyl-CoA to biomass and polyhydroxy-butyrate. Further re-engineering of R.eutropha, where the plasmid expressed four genes redirected acetyl-COA to synthesize isopropanol(Fig.12). With the production of biomass, the plasmids can grow or either produce liquid fuels (C8+ fuels) with the other gene sequence. This led to complete artificial photosynthesis at high efficiency. These modifications led to the development of a new generation light harvesters, the Bionic Leaf.

The advantage of this approach is that there is no need for CO2 concentration where bio-organisms have natural CO2 concentration mechanisms. The design is simple, compared to what is needed for photosynthetic organisms like algae. Furthermore, the above bacteria do not need to see light to carry out its task. Hence it reduces engineering costs. The competition with land resources for the need for crops is prevented.

Water splitting was something common from day one when electricity was sort of discovered. But it was costly with the use of Platinum as electrodes. With the evolutionary design of the artificial leaf with its self-healing, readily earth-abundant catalysts, the cost-effectiveness of this rose skyrockets. A future where individual homes, equipped with solar panels could use sunlight to produce hydrogen and oxygen. These can be stored in the tanks and then fed to a fuel cell to produce electricity. Nocera hopes, this method could be made simple and inexpensive enough so that they could be widely used throughout the world.