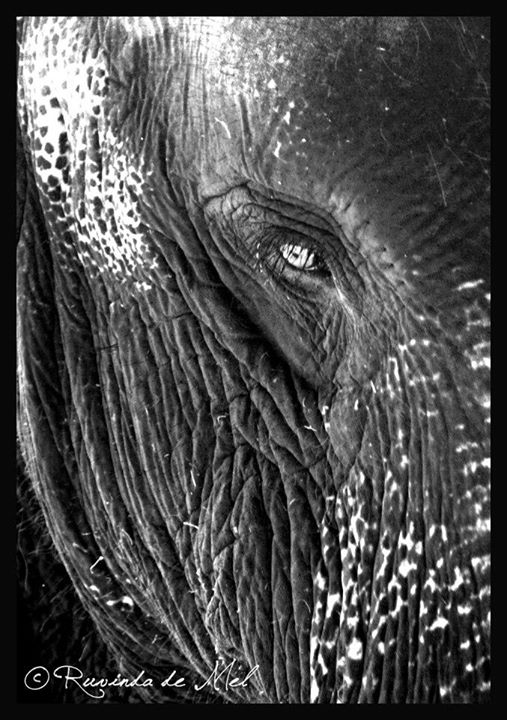 It was yet another day during my undergrad research period. I had left home early and reached my destination in the southern province where I was to observe a group of captive elephants. As I had a long day in front of me I wasted no time in settling down for the observations. I had only just started collecting data when I heard the most unearthly scream. I knew the scream could only have come from a baby elephant: A baby elephant in distress. Halting my work I found my way towards the source of the screams. What I saw next marks the only sight in my life that has made me seriously contemplate the killing of a conspecific.

A baby elephant, not more than two years of age, was being ‘trained’ by a mahout. I watched in horror as the beast uttered loud commands in anger and pulled at the calf’s ear with the steel hook of the ankus when the bewildered baby wouldn’t obey his commands. Every instance in which the steel tip of the ankus pierced his flesh, the baby screamed. A scream borne not only of pain, but also of pure helplessness. The scream of a toddler being beaten, for not doing something he doesn’t know how to.

I have observed baby elephants in the wild on many an occasion. I’ve witnessed how strong their bond is with their mothers; heard their snorts of fear when the mother moves away a few yards and their squeals of pleasure when reunited after that momentary loss of overwhelming care. Something in my heart told me that the calf was crying for his mother to arrive at his side and save him. To place her trunk over him and assure him that the storm would soon come to pass. I had all these thoughts running rampant in my head as I watched on helplessly as the baby was being tortured by the beast on two legs. More than the screams it was the look in his eyes that hammered at my heart. The eyes that stared up at their tormentor in an amalgamation of terror, confusion and exhaustion glazed in a single question; “WHY?”

I realized the witnessing of this inhumane treatment of the baby had greatly weakened my knees and brought two large tears to my eyes. I moved to a quiet place and sat alone and while I pushed back the tears with all my might. A little detective work on my part later on confirmed what I had, in my heart, known all along. The calf had been caught from the wild and was now the ‘property’ of a VIP. I cut short my visit and headed home while thinking of nothing but the little calf. A thousand questions were swimming in the dark void of my brain. Did he remember his mother? Did she linger in his every thought? Did he somehow already sense that he’ll never lay eyes on her again? Did he know that his torture had only just begun and that he would endure this for the rest of his life?

Many people argue that captive elephants are an essential part of our culture and that it is wrong to abolish such traditions. I believe such people speak through the distal end of their digestive tracts. I have come to see what the iron chain does to an elephant’s body. How it cuts into the flesh and creates suppurating sores. More importantly however, I’ve witnessed firsthand what the chain does to their spirit. How it stamps the spark out of the soul of an otherwise majestic being wielding a magnificent personality. What disgusts me most is that all of this, at present, is being done in the name of the man who preached the most regarding compassion towards all living things. Thus I beg you my faithful reader, to take a moment and ask yourself; is it imperative that these animals suffer for our pleasure and pride?