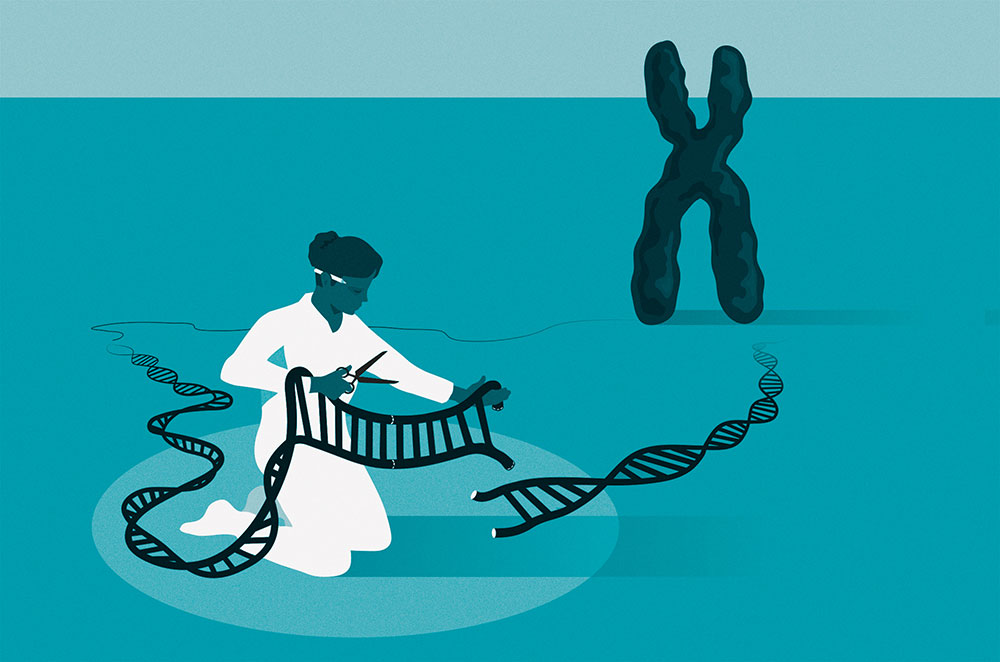 On October 07th 2020, The Royal Swedish Academy of Sciences in Sweden announced that the Nobel Prize in Chemistry 2020 would be awarded to Emmanuelle Charpentier of Max Planck Unit for the Science of Pathogens, Berlin, Germany, and Jennifer A. Doudna of the University of California, Berkeley, USA “for the development of a method for genome editing”. The two female scientists will hence share a cash prize of 10 million Swedish Kronor (which is roughly equal to a whopping 209 million LKR!) for discovering one of the gene technology’s sharpest tools, the CRISPR/Cas9 genetic scissors.

CRISPR/Cas9 genetic scissors, allows researchers to edit the genome of practically any living thing. They can change the DNA of animals, plants, and even microorganisms with extremely high precision and effectiveness.

In earlier days, modifying genes in cells used to be time-consuming, difficult, and at times, impossible. But with the use of CRISPR/Cas9, it is now possible to change the code of life over the course of a few weeks. These are the obvious reasons why Claes Gustafsson, the chair of the Nobel Committee for Chemistry, says that “There is enormous power in this genetic tool, which has not only revolutionized basic science but also resulted in innovative crops and will lead to ground-breaking new medical treatments.”

When Emmanuelle Charpentier and Jennifer Doudna started investigating the immune system of a Streptococcus bacterium, they were only intending to develop a new form of antibiotic. But instead, they discovered a molecular tool that is capable of making precise incisions in genetic material, thus making it easier to change the code of life.

Surprisingly (or not so surprisingly), the whole CRISPR/Cas9 process is in fact natural. It has long functioned as a bacterial immune system, originally found to be defending single-cell bacteria and archaea against invading viruses.

CRISPR, or Clustered Regularly Interspaced Short Palindromic Repeats, is a set of DNA sequences found in the genetic materials of bacteria and archaea. These sequences are derived from DNA fragments of viruses that had previously infected the bacteria/archaea. They are used to detect and destroy DNA from similar viruses during future infections.

For example, if you zoom into the genome of a Streptococcus bacterium, you would surprisingly find repetitive DNA sequences. The same set of nucleotides appear over and over again. But in between these repetitive sequences, some regions uniquely differ (Figure 2). It is quite similar to a particular word being repeated between each unique sentence in a book.

So the current hypothesis is that, when a particular bacterium survives a viral infection, it adds a piece of the virus’ genetic code into the CRISPR region of its genome as a memory of the infection, effectively creating a vaccination card.

This CRISPR DNA is then copied to make a long RNA molecule, called CRISPR RNA (more on this later).

What is Cas9? How Does This All Work?

Cas proteins, or CRISPR-associated proteins, are a class of proteins that’s also a part of the complex machinery, which takes part in defending against viral infections in bacteria. Depending on the immune system, one or more Cas proteins may be required to successfully disarm a particular virus. Special genes that carry the code for these Cas proteins are called CRISPR-associated genes or Cas genes. Strangely, these Cas genes are quite similar to the genes that code for already known proteins that specialize in unwinding and cutting up DNA.

Coming back to the example of Streptococcus bacterium (more specifically Streptococcus pyogenes), its adaptive immune system only uses one Cas protein, Cas9, to combat viruses.

Cas9 is an endonuclease enzyme that is capable of cleaving the phosphodiester bonds within a DNA molecule, thereby ‘cutting’ it into two pieces. This Cas9 protein binds to CRISPR RNA (mentioned above), and with the help of several other molecules such as TracrRNA & RNase III, forms a specific complex that practically acts as ‘genetic scissors’ (Figure 2).

As illustrated above, these molecular scissors contain code from a single virus. So, if that particular virus, whose DNA ‘matches’ the code inside the scissor complex, attacks again, the complex immediately recognizes the threat and ‘cuts’ the viral DNA, thereby destroying it.

CRISPR/Cas9: As a Gene-editing Tool

After uncovering the mechanism of the Streptococci immune system, scientists then succeeded in simplifying the genetic scissors. They also found a way to control this genetic tool so that it cuts the DNA at a location that is decided by the researchers beforehand.

For this, they introduced a ‘guide RNA’ that matches the gene which they want to edit. This guide RNA binds to the Cas9 protein, forming molecular scissors, pretty much like in the Streptococci immune system.

Guide RNA then directs the scissors to its matching gene, and then the Cas9 protein ‘cuts’ the DNA in that specific location. The resulting ‘cut’ will then allow the researchers to alter the cell’s genome, using various types of methods (Figure 3).

In a landmark 2012 paper in science, the duo Emmanuelle Charpentier and Jennifer Doudna along with several other scientists published their discoveries about CRISPR/Cas9 technique. They showed that the CRISPR/Cas9 system could be ‘programmed’ to cut specific sites in isolated DNA, with the help of an appropriate ‘guide RNA’.  Soon after, several other research groups demonstrated that this tool can modify the genome in cells from both mice and as well as humans, leading to explosive development.

Just eight years after the initial discovery, these genetic scissors have reshaped the life sciences now. As mentioned before, changing the genes in a cell, plant or organism used to be time-consuming, and sometimes impossible. But with this new gene-editing tool, researchers can theoretically make cuts in whichever genome they wish, in a faster, cheaper, and much easier way.

And, unsurprisingly, it has now become a standard tool in plant breeding. Scientists have edited the genes that make rice absorb heavy metals from the soil, thus leading to improved rice varieties with lower levels of cadmium and arsenic. They have also developed crops that withstand drought in a better manner, and which resist insects and pests, thereby eliminating the heavy use of pesticides.

In medicine, the genetic scissors have contributed to new immunotherapies for cancer and various other treatments for curing inherited diseases. Clinical trials are already being performed to see whether CRISPR/Cas9 can be used to treat blood diseases such as sickle cell anemia and beta-thalassemia, as well as certain inherited eye diseases. Several methods are also being developed for repairing genes in large organs, such as the brain and muscles. Moreover, animal experiments have already shown that specially designed viruses can carry the genetic scissors to the desired cells, treating various models of inherited diseases such as muscular dystrophy, spinal muscular atrophy, and Huntington’s disease. It is also used to change the DNA of cells and laboratory animals to understand how different genes function and interact, such as during the course of a disease. Furthermore, several other types of research have been carried out to tweak and improve CRISPR and to identify other potential gene-editing tools.

However, not all is well. The great Stephen Hawking once said, “One of the basic rules of the universe is that nothing is perfect. Perfection simply doesn’t exist.” And this, understandably, applies to the CRISPR/Cas9 system as well. CRISPR/Cas9 is not always efficient. It may not ‘edit’ all the cells in the given culture vessel. Therefore any subtle effect of the editing can be masked by the rest of the unedited cells. And this could also lead to ‘mosaicism’. Mosaicism is where an individual carries two (or more) sets of cells, with different genotypes (where here, mosaicism has been caused by the edited set of cells and the unedited set).

Moreover, the CRISPR/Cas9 tool is not always accurate. It can create mutations elsewhere in the genome, which are known as ‘off-target’ modifications. Off-target effects are random and can unduly influence other genes or regions of the genome, subsequently leading to potentially catastrophic consequences.

And then there are the ethical issues, the never-ending debate of whether genetic engineering (let alone CRISPR/Cas9) should be performed on humans, especially on human embryos. For many years there have been laws and regulations that control the application of genetic engineering, which also includes prohibitions on modifying the human genome in a way that allows the changes to be inherited. But from time to time, many scientists across the globe, cross the line, breaking the law, and perform controversial experiments. The most recent and perhaps the most contentious one being the 2018 Lulu and Nana Controversy, where a Chinese scientist named He Jiankui, announced that twin girls had been born from embryos that he and his colleagues had edited using CRISPR/Cas9, to make them HIV resistant. The news sparked an outcry, and many researchers worldwide quickly condemned Jiankui’s work. He was fined and later sentenced to 3-year imprisonment by the Chinese court.

All in all, one thing is for certain, that science is improving. Genetics is improving. Geneticists around the world will continue to cross the line, and spark controversies, no matter what. New ethical issues will be raised, and new laws will have to be made. But one should not forget the fact that this CRISPR/Cas9 gene editor indeed has the potential to solve many of the challenges that are now facing humanity. Undoubtedly, Emmanuelle Charpentier and Jennifer Doudna have developed a tool that has taken life sciences into a whole new era. It is a master key that will open many doors, leading to many discoveries. But one should always keep in mind that, some doors are best unopened. Some discoveries are always the best undiscovered.

So the question is, which door will the CRISPR/Cas9 master key be used to open next? What will lie beyond that door? Or which scientist would be audacious enough to cross the line next? Which door would he open? Immortality? Superhumans?  Well, we, the scientific community, are eagerly waiting for the answers.