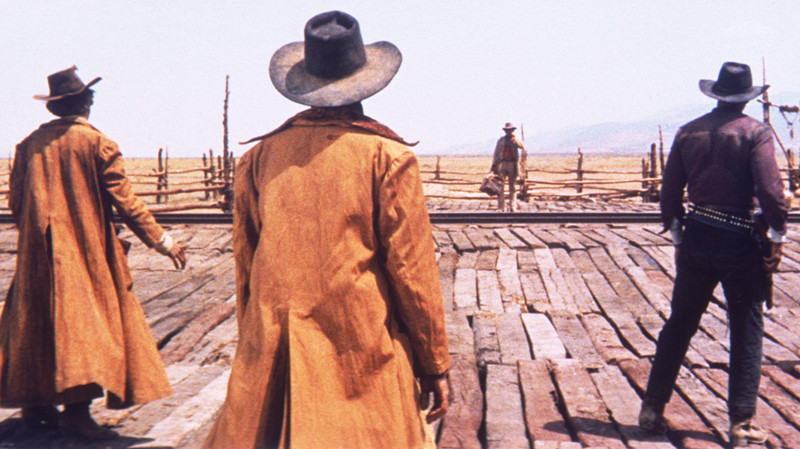 The click of a revolver being cocked was unmistakable. Old Joe had heard it too often not to recognize it. He felt the cold steel pressing hard against the side of his head as he reached resignedly for the drawer.

“How much?” His voice was shaking.

He knew better than to protest. Cooper next door had protested and his wife had been made a widow. Joe had no wife but he liked his life all the same.

The jingle of the office doorbell shook Frank rudely out of his midday shut-eye as a haggard Joe appeared before him.

“He robbed me clean yesterday”, Joe’s eyes shot an unspoken accusation. The sheriff scratched the whiskers on his chin.

“I sent for the rangers y’know. The mail wagon’s been gone a week and I’ll bet someone’ll show up today.”

The words rang empty in Joe’s ears as he stepped out into the heat. The town was a shadow of what it used to be. Wyatt had moved out with the girls after Cooper had been shot and the saloon was boarded up. The batwing doors stared back forlornly at Joe as he trudged past.

Afternoon slipped by into evening. One of Cooper’s kids saw it first. Bran ran through the yard, bumping into Joe in his hurry as he pointed mutely at the approaching dust cloud. The haze drew closer and a rider appeared atop a weary black horse. Shutters creaked open in the windows above the street and faces peeked meekly at the stranger. He dismounted and walked briskly toward the waiting sheriff.

“You can call me Shorty”, a smile parted his weather-worn face as he offered a hand to Frank, adjusting his badge with the other. Wrinkles lined his jaw and his eyes, half-hidden beneath a wide-rimmed derby, were as black as his outfit. The sheriff stooped to shake hands amiably and gestured toward the inn.

A steak was sizzling in Joe’s kitchen for the ranger when the street erupted with the thunder of hooves. They said Sam never shied away from a challenge. The outlaw who had been the bane of bounty hunters for years dropped from his saddle, a six-shooter hanging menacingly from his belt. A corner of his mouth curled in a smirk as his gaze fell upon Shorty. The little man stepped sideways and the outlaw followed suit, each step a measured calculation. They circled each other, long shadows dancing in the fading light. The silence was broken only by the shuffling of feet on gravel, the duo never taking their eyes off each other. The town held its breath. As suddenly as it had begun, the circling stopped. Sam’s blue eyes narrowed as a bead of sweat trickled into his drooping mustache.  Both men reached for their guns simultaneously. A single shot rang out. The ranger had not drawn, but Frank stood on his porch, a smoking barrel in his hand. Apparently, he had a gun too. Sam fell dead.