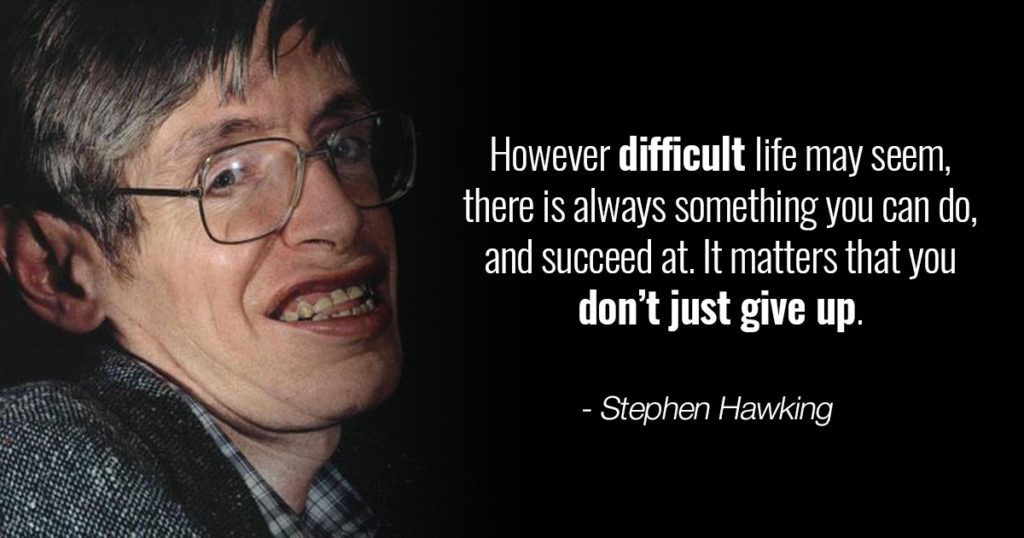 How often do you find a scientist with a brilliant mind along with a wicked sense of humor? Stephen Hawking, English theoretical physicist and cosmologist, was such a rare individual. On 14th of March 2018, at the age of 76, this great scientist closed his eyes forever.

He was much more than just a scientist with a brilliant mind. He had a rare gift of never-ending courage and persistence to face life’s challenges despite the hardships, without losing his brilliance or sense of humor.

At the age of 21, he was diagnosed with a rare form of slow progressing motor neuron disorder (known as ALS: Amyotrophic Lateral Sclerosis) which gradually paralyzed him and finally confined him to a wheelchair. Initially, the doctors predicted that he had only about two more years to live. However, he was able to beat the odds and survive for more than half a century, while focusing on the silver lining instead of the dark cloud hanging over his life.

“My goal is simple. It is a complete understanding of the universe, why it is as it is and why it exists at all.”

He was already a brilliant student at the Oxford University College when he was first diagnosed. He did not allow his condition to stop him from continuing his research as a PhD student at Cambridge.  He was the author and Director of Research at the Centre for Theoretical Cosmology within the University of Cambridge. Along with Roger Penrose he forwarded the theorems on gravitational singularity within the framework of general relativity. Also, he predicted that black holes emit radiation, which is now called “Hawking radiation”. Hawking was also the first to forward a theory of cosmology explained by a union of the general theory of relativity and quantum mechanics.

Hawking wanted to achieve as much as he could within the short time he was given and it is evident that he achieved much more than he hoped for.

His death would be a great loss to the whole scientific community, although his legacy would live forever!